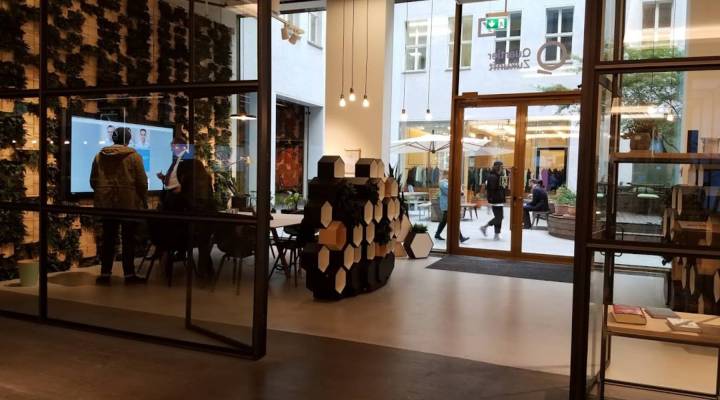 COPY
This Berlin branch of Deutsche Bank hopes its co-working space and shared courtyard will lure in potential clients. Clare Toeniskoetter for Marketplace

Karsten Kammholz is taking a lunch break at a unique Deutsche Bank branch in Berlin.

“I don’t come here to do some banking, I just go here sometimes to eat my lunch,” he said. Kammholz confirms that, like in the United States, eating lunch at a bank branch is not normal in Germany. “One colleague said once, ‘Come on, let’s go to the Deutsche Bank and eat something,’” he said. “I was looking at him like, ‘OK, what?’”

Kammholz was surprised to discover that he liked the food at the bank. Today’s menu includes a German potato soup and something called a “Buddha bowl,” along with espresso drinks and cafe pastries.

Sitting at a shared table in a sleek glass room decorated with a wall of plants and a ceiling of exposed pipes, Marco Kiewe is also not using the bank for banking. Kiewe comes to the branch’s open co-working to build his website and app — and he doesn’t even have an account with Deutsche Bank.

“Banks have to find other business models because their normal business model with a bank and bank accounts is not needed anymore,” Kiewe said. “There are a lot of nice trends in the world, and Berlin is going to be one of the places where it will all be tested.”

Forget cash. This bank traded ATMs for a co-working space.

Called Quartier Zukunft or “bank of the future,” this 14,000-square-foot space is a testing ground for new features, like a cafe and a co-working space, along with a short-term babysitting service, orientations for newcomers in Berlin and a rotating gallery exhibit.

“The main goal is to grow,” explained Stephan Dietzel, a manager at Deutsche Bank. “This is how we try to attract more people to come to a Deutsche Bank branch.”

When the bank was remodeled about a year ago, Dietzel’s office was turned into the babysitting area. Now Dietzel works in a shared space, and he meets with customers at shared tables or in private rooms with adjusting window frosting.

“We try to be as mobile as possible, work with our iPads,” Dietzel said.  “It’s not necessary to have a separate office.”

However, this bank branch is still a bank branch. Customers can open bank accounts, plan for retirement or get a mortgage here. But there is one notable exception — the bank is cashless.

“Quartier Zukunft shows a bit what a bank branch could look like in the next five to 10 years, and we strongly believe that in five or 10 years cash will not have the same meaning like it has in 2017,” Dietzel explains. Although, technically there are some ATMs outside and around the corner.

The redesigned bank isn’t unique to Germany. Americans can already get financial advice via video chat at a bank in Chicago, organize a community meeting at a bank in Portland, or hang out in the cafe at a bank in Boston.

“We’re still probably three to five years out to where you look around and go holy smokes, what happened to the branch?” she said. Mobile banking apps and apps like Venmo have made it possible to bank on the go, making bank branches less relevant.

With fewer people going to bank branches, many are closing. According to research from S&P Global Market Intelligence, over 1,000 U.S. banks closed in the U.S. in the first half of 2017.

Bush’s idea of the bank of the future sounds a bit like Quartier Zukunft in Berlin. “They won’t be transactional as much as they will be a place for you to get wealth management advice,” she predicts. “I mean, they’re just going to be more multi use than they are right now.”

But back at Deutsche Bank in Berlin, Dietzel isn’t confident that his “bank of the future” is actually the future. Dietzel expects to see certain features like a cafe or co-working space spread to other banks, but he does not expect all branches to look like Quartier Zukunft.

“This is definitely not a blueprint of [what] Deutsche Bank branches will look like,” Dietzel said.

Bank branch managers and executives can’t predict the future — but they’ll keep experimenting as they try to create their own future.