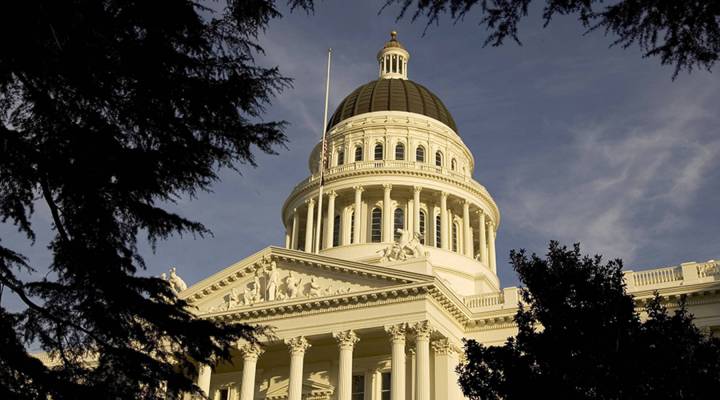 Sexual harassment allegations are entering national politics for the first time following the Harvey Weinstein allegations. The Washington Post reported today that four women allege that Republican U.S. Senate candidate Roy Moore of Alabama sexually touched them when they were teenagers. In a statement, Moore called the story “outlandish.”

In California, more than 140 women from all sides of the political spectrum signed an open letter published in the Los Angeles Times last month alleging widespread sexual harassment at the state Capitol. Jodi Hicks, a principal at the Sacramento lobbying firm DiMare, Brown, Hicks & Kessler, was also one of the first to sign that letter. Marketplace host Kai Ryssdal spoke to Hicks about the rampant sexual harassment complaints in politics. The following is edited transcript of their conversation.

Kai Ryssdal: You’ve been in around politics and the legislative process for a good long while, right?

Ryssdal: How long did it take before you had an incident of whatever severity, and you said, “You know what, this is not cool”?

Hicks: So it’s interesting for me as I actually got into politics a little bit older than others. I was around 30 years old. So I will say, I’ve had something happen to me at every industry that I’ve worked at. So it wasn’t brand new in politics for me, it was different. But I would say, maybe two weeks. And I will also say every woman I know has had something happen to them.

Ryssdal: Every woman you know?

Hicks: In every industry. Every woman I know.

Ryssdal: There are a couple of things that make politics different, I guess in a lot of ways, but one of the biggies, especially in this circumstance, is that there’s no HR in politics. I mean, it’s not like you can go to the human resources and say, “Hey, this happened to me.”

Hicks: Right. The human resources is what we call Rules Committee, which is a committee made up of other members. If you come forward and file a complaint, the Rules Committee, if you’re a staffer in the building, that Rules Committee, for the rest of your career, is in charge of OK’ing a salary increase that you request, for instance. If you’re a lobbyist and you file a claim, those committee members are members that you have to lobby later. So one thing that we can all have a good conversation is, what is the appropriate way to file complaints to talk about this issue? And it really should be an independent party, I think. That hopefully is one of the the policy changes that we can see.

Ryssdal: About Sacramento specifically is, are there changes in, I guess the phrase would be like, complaint protocol or something. I mean, are there changes coming in the way these things get handled since this letter. Do you know?

Hicks: Well, I know there’s conversation about it, and the Senate has hired an outside consultant and outside firms to look at the policies and see if there needs to be changes. So there certainly is discussion and conversation about how to move forward, and that’s really the conversation that needs to happen.

Ryssdal: Do you get that sense that it is? Is this is a germinating moment here?

Hicks: Yeah, I think there is change that’s going to happen, and I think it will be for the better. But I think it’s going to be uncomfortable along the way. And I’ll tell you, our firm is women-owned, and just today, I actually heard from one of my clients that they had reached out with a member to talk about setting up a meeting, and potentially drinks, which is where a lot of our meetings happen. And they had pause with meeting with our firm because some of the legislators had talked about no longer having drinks with women lobbyists.

Ryssdal: So that would be just business-terrible for you.

Hicks: Exactly, exactly. So certainly, clearly, there’s going to be some ramifications for all of this, and that might be hard on my business. It might be better. I don’t know. But there’s no way to get through it and have change happen without having that conversation and doing the work.