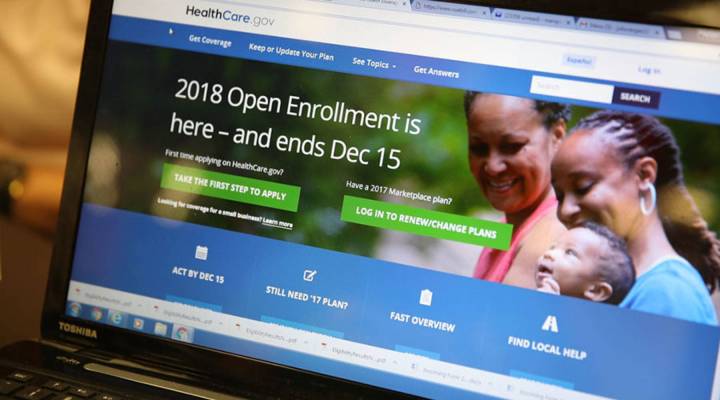 Nearly 5 million Americans turn 26 this year. For some that means getting booted off of their parents’ insurance and buying polices under the Affordable Care Act.

This September, after his birthday, New Yorker Carl Glenn bought his first health insurance policy. Glenn, who works two part-time jobs, had been anticipating this moment for at least a year. Coming of age under Obamacare, he’d made certain assumptions: he’d hit 26, then he’d shop online for insurance. With the help of federal subsidies to lower the cost of premiums, he’d join some 12 million other Americans who get their coverage on the Obamacare exchanges.

But then Republicans won control of Congress, and Donald Trump became president. The GOP has voted more than 50 times to amend or repeal the Affordable Care Act and candidate Trump had campaigned on the issue.

The threat that Obamacare could disappear worried Glenn enough that he met with a health insurance guide – known as a navigator – after the election to check out his options. “I was like, ‘do I need to sign up now? My birthday is in September, is it still going to be around by then?’” recalled Glenn. “And he said, ‘I can’t really tell you. I don’t know.’”

Before this year’s open enrollment period, the biggest problem for young adults had been the daunting task of shopping for insurance. The jargon of it all – deductibles, premiums, and narrow networks – can make the process seem difficult.

Plus, how much a plan costs will depend on a person’s salary. That can be a tricky estimate for the gig-economy generation. Glenn’s girlfriend, Kelly Weaver, 25, works as a paralegal in New York. She said right now people her age have to deal with those headaches as well as the prospect that Obamacare may go away.

“I have this conversation with a few people being like, ‘I don’t know if I’m going to be able to continue to get health care. Cause I can’t afford it if we lose Obamacare, if we lose the Affordable Care Act,’” she said.

That’s because without the ACA’s subsidies, coverage would be unaffordable for many, something Glenn realized after he talked to the navigator. “If I didn’t have my tax credit through Obamacare, plans I think are like 400-ish dollars,” he said. Between his two jobs, working as a waiter and assisting a casting director, that works out to nearly a week’s pay, which would make it out of reach for Glenn.

Glenn graduated with a degree in theater. That’s the career he wants, maybe in casting, he’s not sure yet. But pursuing theater was important enough that Glenn decided to take a gamble and stay on his parents’ plan and hope Obamacare was still around by this fall. It was – and he enrolled in September, after his birthday. “Luckily they have not been able to repeal the Affordable Care Act and so right now I’m OK,” he said.

Glenn’s plan runs $200 a month with subsidies. It takes him through the end of the calendar year. As for the 2018 enrollment season open now – he’s taking a few weeks to decide if he’ll sign up. He’s waiting to hear back from a couple of other jobs he’s applied for – some that offer health insurance coverage. Getting one of those would mean Glenn could worry about something other than the future of Obamacare.