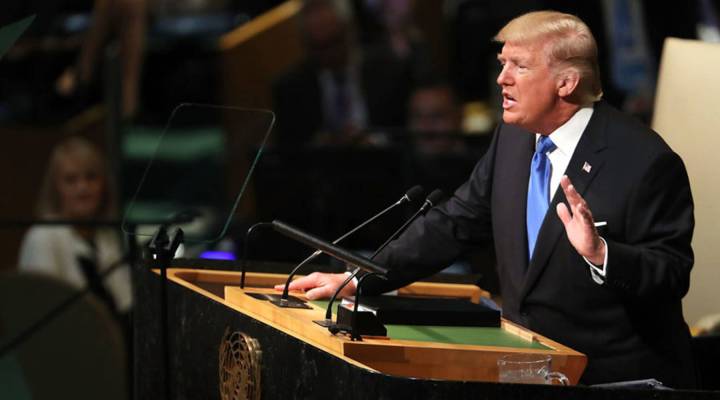 The United Nations climate talks in Bonn, Germany next week will be the first full meeting of the international conference since President Donald Trump said he was taking the U.S. out of the landmark 2015 Paris Agreement. The White House will send some officials to negotiate on behalf of the U.S., but it isn’t paying for the traditional pavilion that most countries sponsor to showcase their climate change efforts. Instead, private charitable organizations have stepped in to fill that void.

International negotiation is a major part of the climate conference, but environmental organizers stressed the importance of a pavilion as a demonstration and discussion area to highlight ongoing efforts to reduce emissions. “The story that we tell to the rest of the world — our trading partners, our allies, our competitors — about what the U.S. economy is doing and what actors in the U.S. are up to on climate and clean energy,” said Daniel Firger, a director with Bloomberg Philanthropies, the charity of former New York City mayor, Michael Bloomberg.

Bloomberg’s organization and other private donors are giving hundreds of thousands of dollars for an American pavilion that states, cities and businesses working on climate change can use. “Unless we set up a space and give them a platform to tell that story, there’s really no way to engage in this U.N. climate process,” Firger said.

That engagement can include the beginnings of global business deals, like discussions of offshore wind farms or financing for electric vehicle infrastructure. America’s local governments and businesses are doing a lot to reduce carbon emissions, but their efforts could be overshadowed by federal actions, Firger said.

“If you’re sitting in Beijing, you may not have a good sense of what’s going on in Boston or Bosie,” Firger said. “Our job is to show the rest of the world that America is still in and that we’re continuing to cut carbon emissions no matter what the White House and the EPA might say at this climate conference.”

He said that’s important, because businesses want to stay competitive in the growing global green market.

A whole slew of American organizations are attending the talks, including America’s Pledge, the We Are Still In coalition, the U.S. Climate Alliance, and Climate Mayors.

California will also send a delegation. The state has continued to push against the White House’s environmental agenda. This year, it set tougher emissions standards for cars and trucks. “People in other countries are looking to what we’re doing in California,” said State Sen. Ricardo Lara. He said that leadership role became clear to him at the Paris Climate Change Conference. He sat in on a hearing about air pollution, with 50 countries represented, and California was invited to present before the U.S. Environmental Protection Agency.

“The woman who was chairing the working group from Morocco, she very blatantly said, ‘Look, why don’t we have the first entity that has actually done more to address this type of pollution start the meeting off,’” Lara said. “‘Why don’t we begin with Governor Jerry Brown from California?’”

Lara said California will continue to lead in reducing emissions regardless of federal policy. After all, the Golden State is home to companies like Tesla, the electric car giant. It’s also the nation’s biggest market for solar power.

Others are headed to Bonn in the name of their local economies. Mayor Lionel Johnson Jr. of Saint Gabriel, Louisiana, is representing the Mississippi River Cities and Towns Initiative and will advocate for industrial river communities.

“The Mississippi River itself generates about $500 billion a year in revenue, supporting about 1.5 million jobs,” Johnson said. “Basically, it is our lifeline  — the lifeline of my city, and it’s the lifeline of many cities situated along the river. ”

“So we need to be a part of the global commodities market discussion to help shape the destiny of my city and many cities along the river,” he said.