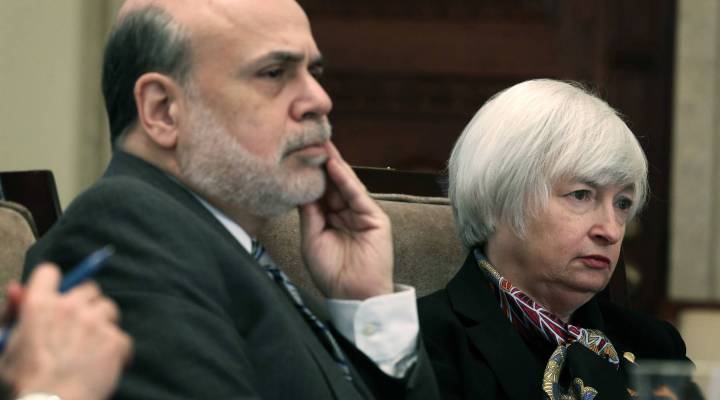 With Janet Yellen’s term as chair of the Federal Reserve coming to an end in a few months, President Donald Trump is about to announce her replacement. According to reports, Jerome H. Powell, one of the Fed Governors since 2012, will be named as the next chair this Thursday.

Being a fed chair is not exactly an easy job, so we combed through speeches delivered by Powell’s predecessors to find out what advice they have dished out in the past. Here is what they had to say:

What advice did Yellen’s predecessor give her? “Don’t take the job,” Ben Bernanke joked in 2015. He added that there was no need to give her parting advice as the two had worked together for years. Bernanke had one more piece of advice — that while maybe not useful to Yellen — could come in handy for Powell.

“I do remember — and this is neither here or there — but I remember that when I took the job in the White House as head of the council of economic advisers, there was a drawer and on the drawer was written: ‘In emergency, open this drawer.’ You open the drawer and there is a bottle of scotch. But I didn’t do that. I didn’t do that, because she is not a drinker.”

2. Being a chair isn’t a dictatorship

“You can’t exactly do what you want,” former Fed chair Paul Volcker said last year. “You have a board. You have a public. You’ve got [regional] reserve bank presidents.”

3. Play well with others

When he delivered the 2009 commencement at Boston College, Bernanke told graduates that he tries to be realistic about his capabilities and work with others to solve problems facing the U.S. economy.

“I know there is much that I don’t know,” he said. “I consequently try to be attentive to all points of view, to work collaboratively, and to involve as many smart people in policy decisions as possible.  Fortunately, my colleagues and the staff at the Federal Reserve are outstanding.  And indeed, many of them have demonstrated their own breadth and flexibility, moving well beyond their previous training and experience to tackle a wide range of novel and daunting issues, usually with great success.”

4. Be ready for people to publicly oppose you

“Well, if you’re the chairman you always like to have a consensus; if you’re opposed you think it’s a healthy thing to oppose! There’s a little too much opposition these days. Now they have a system: they oppose in public before the meeting but they don’t oppose at the meeting,” Volcker said last year.

5. Be ready to stand for what you believe

When Yellen delivered her 2014 commencement speech at NYU, she said she admired Bernanke’s courage to stand up for what he believed despite the public criticism.

“To stabilize the financial system and restore economic growth, he took courageous actions that were unprecedented in ambition and scope,” she said. “He faced relentless criticism, personal threats, and the certainty that history would judge him harshly if he was wrong. But he stood up for what he believed was right and necessary. Ben Bernanke’s intelligence and knowledge served him well as chairman. But his grit and willingness to take a stand were just as important.”

“You won’t succeed all the time,” Yellen told NYU graduates, but she might as well have been speaking to her successor. “Finding the right path in life, more often than not, involves some missteps. My Federal Reserve colleagues and I experienced this as we struggled to address a financial and economic crisis that threatened the global economy. We brainstormed and designed a host of programs to unclog the plumbing of the financial system and to keep credit flowing. Not everything worked but we kept at it, and we remained focused on the task at hand. I learned the lesson during this period that one’s response to the inevitable setbacks matters as much as the balance of victories and defeats.”

Bernanke had a similar message to Princeton graduates a year before, when he said: “Nobody likes to fail but failure is an essential part of life and of learning. If your uniform isn’t dirty, you haven’t been in the game.”

Despite Trump accusing Yellen of keeping interest rates low on purpose to help President Obama, the current Fed chair insisted that politics have no place at Federal Open Market Committee meetings.
“Partisan politics plays no role in our decisions,” Yellen said before the 2016 presidential election. “We do not discuss politics at our meetings and we do not take politics into account in our decisions.”

8. Those pesky unpredictable humans will make your job difficult

“Like weather forecasters, economic forecasters must deal with a system that is extraordinarily complex, that is subject to random shocks, and about which our data and understanding will always be imperfect,” Bernanke said in 2009. “In some ways, predicting the economy is even more difficult than forecasting the weather, because an economy is not made up of molecules whose behavior is subject to the laws of physics, but rather of human beings who are themselves thinking about the future and whose behavior may be influenced by the forecasts that they or others make.”

9. Watch what you say

A Fed chair has to strike the perfect balance when speaking in public, according to Bernanke.
“I realize that it isn’t my words that matter, it’s the fact that the Fed chairman has influence on monetary policy, it does mean you have to take care [with the words],” explained Bernanke. Mainly, Bernanke was concerned that his public statements could affect the markets. “Moving the market is not a great thing, because if you are communicating clearly and people understand what you are doing, then you shouldn’t be surprising the market very much.”

10. And lastly, don’t expect people to actually know who you are

Back in 2014, when Pew Research Center surveyed people on the identity of the current Fed chair, the majority were unaware that Yellen was in charge.

Who’s in charge of the @federalreserve? Don’t bank on public knowing the answer http://t.co/2XF7CwRMRX pic.twitter.com/NQdBOT9W9I

“You know, according to a recent poll, 17 percent of the population still thinks that Alan Greenspan is the chairman of the Federal Reserve. So I must have made a big impression,” Bernanke joked after the poll came out.

One of the reasons that some people might still associate the title of Fed chair with Greenspan years later is that he served for five consecutive terms, from 1987 to 2006.