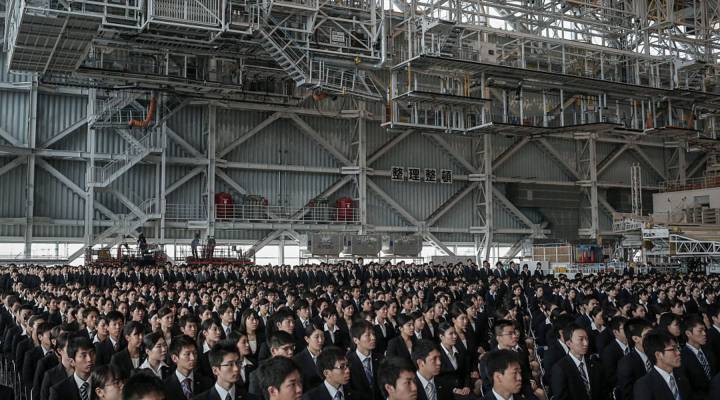 New recruits listen to speeches during the welcome ceremony for new employees of All Nippon Airways Holdings at an ANA hanger in Tokyo in 2015. Chris McGrath/Getty Images
Make Me Smart With Kai and Molly

New recruits listen to speeches during the welcome ceremony for new employees of All Nippon Airways Holdings at an ANA hanger in Tokyo in 2015. Chris McGrath/Getty Images

We’ve been talking about capitalism on Make Me Smart. How to make capitalism bearable, how to change capitalism, how to exist within capitalist society with dignity. If we know that capitalism doesn’t care if you live or die, as Kai said, is there a way to live and work and still feel like a human?

This reminded one listener of an anecdote his sister told from her days teaching English in Japan. His sister’s host mother would track the stock price for her husband’s company every morning, because in Japan, they have lifetime employment (shūshin koyō in Japanese.) If the company fails, so does the whole family and everyone in the company. And people are invested in these companies because employees have been there a long time and they’ve worked in many sectors of the company — not just the division where they have expertise.

The way this family rooted for the companies that their family members worked at reminded this listener of American professional sports teams, where if the star player succeeds, everyone gets a championship ring. And to him, it brought up a question: “Rather than having a system in which individuals compete, why not have one in which teams compete so that if the teams wins, everybody wins?”

It’s true, careers are all but a part of the distant American past, let alone careers with one company. But let’s get into how lifetime employment works, because despite Japan’s growing economy, the system that has secured employment for so many has weaknesses, including neglect for younger workers and a steep wage gap between irregular workers and regular full-time corporate employees.

Companies maintain very broad employment categories or ranks, rather than paying employees for the particular jobs they perform. Employees begin with a standard basic wage, and receive an increase in pay for each year of service. An employee who leaves to join another company would start from a lower end of that company’s wage scale and his or her income could be lower than other employees’ of the same age in the same company. The seniority-based wage system keeps workers from changing jobs, since after a few years of employment they enjoy a wage level that they could not match if they moved to another company. The seniority-based wage system underpays young workers, but rewards them well in later years, even if their productivity declines. It offers workers a strong incentive to remain with their first employer.

By 2009, right after the global financial crisis of 2007-2008, a far smaller portion of workers had lost their jobs in Japan than in either the U.S. or the EU, according to the New York Times. But this came at a cost.

There’s also the issue of keeping alive businesses that are no longer competitive in order to keep people employed. And there are other problems of inequality for those who aren’t able to access the security this system provides, which Prime Minister Shinzo Abe has said he’s working on (many times, since 2013) by “reforming people’s work style.”

But the policy has by no means snuffed the life out of Japan’s economy, where output has grown for six straight quarters, the stock market is at a 21-year high and unemployment is as just 2.8 percent.

As another listener illustrated in the last episode of Make Me Smart with a description of the horse statues outside the Federal Trade Commission in Washington, D.C., that represent the ferocious and sometimes untenable forces of capitalism: It’s the laws, institutions and norms we put in place to harness the beast of capitalism that make it friendlier for humans and workers. Japan’s lifetime employment policies are one way of doing that.