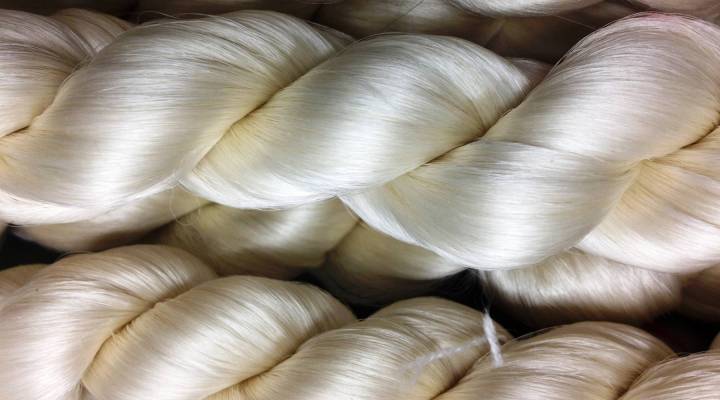 COPY
These silk threads are mass produced by silkworms but based on the protein a spider uses to spin its web. Photo Courtesy of Kraig Biocraft Laboratories

These silk threads are mass produced by silkworms but based on the protein a spider uses to spin its web. Photo Courtesy of Kraig Biocraft Laboratories
Listen Now

If you’re a fan of superheroes, you know the story.

The U.S. Army has a million-dollar contract with Kraig Biocraft Laboratories, based in Ann Arbor, Michigan.  The company is developing an elastic yet durable fiber that can be woven into protective clothing. The science is fairly new.  But the source is very old. “Silkworms produce silk; spiders produce silk,” said Jon Rice, chief operations officer at Kraig Labs. “They have different recipes; different designs.”

Rice is describing the protein silkworms use to spin their cocoons and spiders their webs. Spiders produce a particularly tough material. The problem is, it’s hard to round up a lot of spiders in one place to harvest their silk. And they tend to eat each other.

So, Kraig Labs had to get creative.

“We’ve taken that recipe from the spider, re-created that and created an enhanced silkworm; a genetically engineered silkworm that produces that spider’s design,” Rice explained.

Rice said spider silk is more elastic than Kevlar, the fibrous material found in the Army’s combat helmet since the 1980s. So, his company’s product could also be used in body armor and even protective undergarments.

Scientists at Michigan State University are also working on a silk product derived from spider DNA. Chad Pastor is the business development manager with MSU’s Bioeconomy Institute.  He said the process starts with fermenting replicated spider DNA, almost like beer. “Then, they extrude the fibers and spin them into threads to make fabrics,” said Pastor.

Silk protein fabrication is still an evolving science. But Kraig Labs is leaning on a lot of institutional knowledge. Silk has been a commercial industry since ancient China some 4,000 years ago. Now, with the advent of gene sequencing, the cost of replicating spider DNA is dropping dramatically, clearing the way for more products to come to market.

That’s all there is to tell for now. This yarn has been spun.