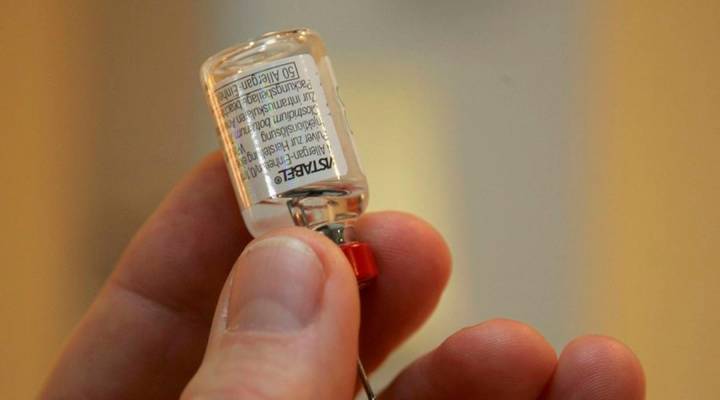 Botox is a $2.8 billion revenue stream for the pharmaceutical giant Allergan, and that number could grow closer to $4 billion by 2020. Botox is also the end user product of the neurotoxin Clostridium botulinum, a substance so lethal that the U.S. government puts safeguards on the Botox production process. The cost of these security measures combined with the scientific difficulty of producing Botox have basically give Allergan a monopoly on the drug. Cynthia Koons had the cover story of this potentially deadly supply chain in the most recent issue of Bloomberg Businessweek. Marketplace host Kai Ryssdal spoke to her about the story. The following is an edited transcript of their conversation.

Kai Ryssdal: I don’t mind telling you this was mildly terrifying, this article. Do me a favor and start where you started the piece. The entry into the Allergan labs and the whole protection system they set up for for the chemicals behind this drug.

Cynthia Koons: Sure. So when you get to Allergan’s facility in Irvine, this is where they do a lot of the research into Botox and where they might make the drug. And so the work that’s done in Irvine has to be done with a very high level of security and protection because first of all the toxin is highly lethal, and so for people working in those labs the company has to guard against anything happening to them. But then also if this toxin were to ever get in the wrong hands it could be used as a potential agent of bioterrorism. So the company has to be cognizant of all the protections that the government puts in place to protect the botulinum toxins.

Ryssdal: How did we get to the point then, where people inject this stuff into their faces, but also Allergan has, in essence, a government-facilitated monopoly on this drug?

Koons: This is actually an incredible medical breakthrough and that can never be taken away from this story. That is one of the most amazing things is that scientists were brave enough and smart enough to work with this toxin and find out what it could do in terms of controlling motor nerves and stopping some spasticity disorders. This is some of the first uses in people who didn’t have a quality of life, they were barely functioning because of these muscle spasms that they were dealing with. And so it was actually years ago, over a century ago that initially a scientist said, “Hey wait this could potentially be used medicinally.” That’s a part of the story that often gets overlooked because everyone thinks of Botox and they think of aging.

Ryssdal: Cosmetics, sure. But the other part of this is that the government is so worried about this, the actual root toxin getting out, that it has basically made it impossible for competitors to get into the field.

Koons: The barriers to entry are quite high and there’s a few reasons for that. First of all, it’s scientifically very difficult to replicate Botox. It’s protected by a trade secret so there’s no no sort of playbook in that regard to directly replicate Botox. But even if you were to figure it out, you’d have to spend a substantial amount of money investing in security. You have to have a completely dedicated facility with a very high level of security that probably doesn’t mirror anything else in your supply chain. For people who do want it for the cosmetic purpose, which is where the company would make more money per injection, you’re really looking at coming up against a brand like Coca-Cola or Kleenex or Xerox, where the brand itself is very powerful.

Ryssdal: You talked to some folks who figure that by 2020, this is going to be a $4 billion enterprise.

Koons: It’s incredible. It’s their biggest drug. It’s continuing to grow. It’s really showing a lot of potential and I guess what really could happen here is that, say it’s successful in something like depression, there are a lot of patients they could pick up through that. So other companies are trying to get in there and even just make other drugs that might be like Botox but it’s going to be really tough to compete with this franchise.