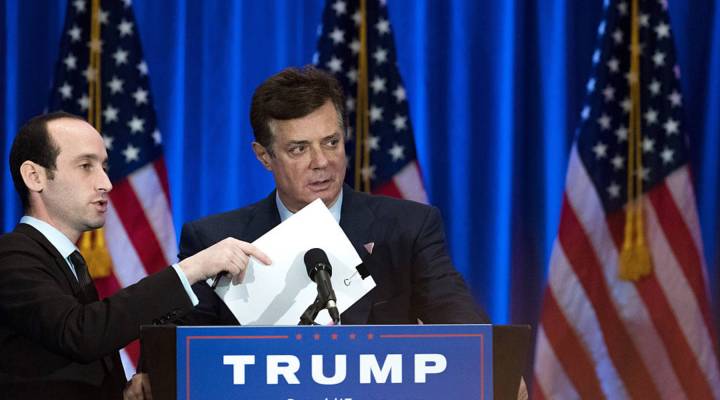 Robert Mueller’s special counsel was tasked with “a full and thorough investigation of the Russian government’s efforts to interfere with the 2016 presidential election,” including any links or coordination between the Russian government and the Trump campaign.  And yet, the indictments announced today against former campaign chair Paul Manafort and his associate Rick Gates don’t seem to have much to do with that at all. In fact, they’re mostly financial crimes.

This is not all that surprising, according to Lisa Kern Griffin, professor of law at Duke University. Manafort was under scrutiny long before Mueller’s investigation began and so it makes sense that those issues would come up first.

“There’s nothing to suggest there won’t be additional charges. This does not have the feeling of an endgame at all,” Griffin said. “This is the very beginning.”

The indictment is 31 pages with charges dating as far back as 2006. Manafort and Gates are accused of making millions of dollars lobbying for a pro-Russia campaign in Ukraine and laundering that money through various offshore accounts and shell companies in order to hide its origins and avoid paying U.S. taxes. Both Manafort and Gates pled not guilty to the charges of tax fraud, conspiracy and money laundering.

Tax fraud is just the beginning…

In some cases, these seemingly unrelated financial charges are useful to prosecutors.

“Prosecutors often will indict somebody based on unrelated charges if they think that person has information about somebody up the chain,” explained William Spade, an attorney in Philadelphia and former assistant district attorney.

One of the reasons that tax and money-related charges are the first ones to come up is because anything to do with money is likely to leave a paper trail, said Mitchel Roth, professor of criminal justice at Sam Houston State University. This makes tax records a fruitful place for prosecutors to look.

“[It] could be something as minor as the records of a drug dealer, a crack house, or something like that,” he said. “Whenever there’s written records, this is when the IRS comes into it or the tax authorities.”

Where did the money go in this case? Things like luxury cars, antique rugs, college tuition, and real estate.

Money laundering: how exactly does it work?

Manafort bought a condo at 29 Howard Street in Soho, New York back  in 2012, according to the indictment. The fourth-floor apartment was purchased by MC Soho Holding — owned by Manafort and his family — for more than $2.8 million. The money came from offshore entities in Cyprus.

“All that money derives from the original illegal act of failure to file what their activities were with the federal government, and failure to file accurate tax returns based on those funds,” said John Byrne, president of the anti-money laundering firm Condor Consulting. Using that money to invest in real estate  — a legitimate investment — to disguise the source of the funds is money laundering, he added.

It doesn’t stop there, however.

The indictment says Manafort then borrowed against the property, pretending it was a second home in order to get a larger loan. Meanwhile, he was renting the condo out for thousands of dollars a week on Airbnb.

Laundering money through real estate investment is common, according to Moyara Ruehsen, an associate professor at the Middlebury Institute of International Studies.

It’s one of the reason why the Treasury Department now requires title insurers to identify the actual buyers of high-end real estate in cities like New York and Miami.

“It will certainly make corrupt individuals think twice about purchasing property in those areas,” said Ruehsen. However, there are plenty of other upscale markets where the order doesn’t apply.

Kristin Schwab contributed to this report.