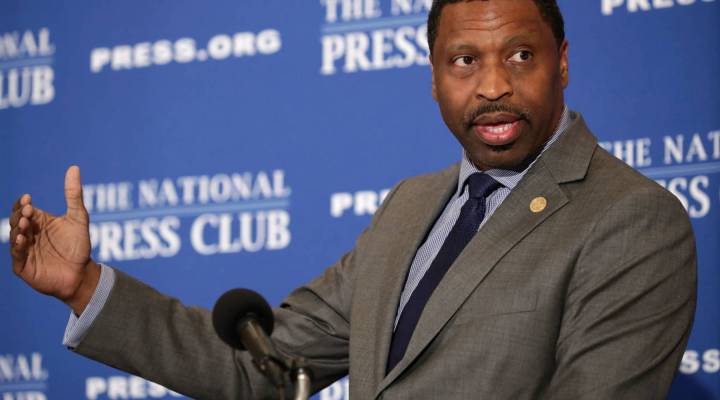 The NAACP is advising African-American travelers to watch out for American Airlines.

The civil rights organization has compiled accounts of “disturbing incidents,” including a case involving two traveling companions who showed up with first-class tickets. The white passenger was allowed in first, while the black passenger got bumped down to coach.

Derrick Johnson, the president and chief executive of the NAACP, has a meeting in the works with the company. He stopped by to talk with us about what he hopes to get out of this interaction and the NAACP’s goal of ensuring African-American consumers are treated fairly.

David Brancaccio: So you’re going to get that meeting with American Airlines?

Derrick Johnson: Yes. So as a result of the advisory, we received several calls from American Airlines. Our general counsel has already spoken with one of the VPs, and we want to move forward to sit down with the CEO and make sure that American Airlines understands our concerns, that as consumers, we want to make sure that we are treated with a level of respect. And that incidents that could be considered racialized, to be minimized through an approach where American Airlines could provide sensitivity training to their employees. But we also found that in many cases, these incidents happen with large companies when the leadership, or employee diversity, is not at a level where their decisions are made with the necessary sensitivity. So when they address particular problems, it is not in a manner which is unequal.

Johnson: One of my goals is to make sure that we have good corporate partners, and that African-American consumers are able to navigate through the reality of all their business dealings and their personal agenda in a way in which they can receive equal treatment. It is incumbent upon the NAACP as an advocacy organization to use the tools at our disposal to make sure all of our communities are afforded a fair, quality life.

Brancaccio: Now you’ve called on people of color to practice, I think the term is dollar discipline. That’s what? About rewarding companies with your money if they get it right? And keeping the dollars away from companies that get it wrong?

Johnson: Right. I mean, many people in our community, they really want to support businesses that support their quality of life. And that is what I term dollar discipline. That if we want our return on our investment in corporations, we will have an expectation of fair treatment. And that’s not too much to ask.