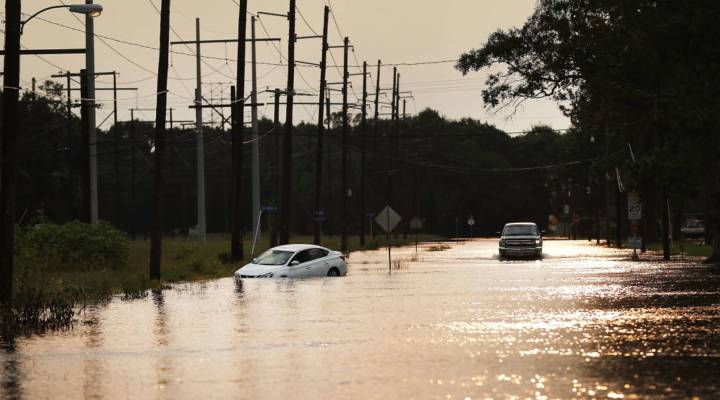 COPY
A truck drives through high water along a street in Orange, Texas, on Sept. 6, more than a week after Hurricane Harvey made landfall. Spencer Platt/Getty Images
Weather Economy

A truck drives through high water along a street in Orange, Texas, on Sept. 6, more than a week after Hurricane Harvey made landfall. Spencer Platt/Getty Images
Listen Now

Getting your life together after a major disaster is tough, no matter what. It’s especially hard without one of the major lifelines after disaster in the United States — direct cash assistance from the Federal Emergency Management Agency. Unauthorized immigrants don’t qualify. Houston, struck in August by Hurricane Harvey, is home to about 500,000 unauthorized immigrants.

One of those is a woman named Maria. She and her family have been bouncing from shelter to shelter since Harvey hit and flooded their apartment. We’re not using her full name because she has yet to apply for U.S. citizenship. She’s been in Houston for at least a decade.

When I met her, she was dealing with a big problem. Her car had been repossessed, and she was at the dealership, pleading with the owner to allow her to have it back.

“They’re taking my car with all my husband’s tools inside,” she said in Spanish. “You just don’t do that.”

Her husband is an electrician and the couple has four young kids. The car is central to their life and income.

Maria can’t afford what the dealership is asking to get the car back. Unlike millions of other hurricane survivors, she isn’t eligible for cash from FEMA because she’s not a U.S. citizen. Her children are citizens, though, so they have a right to FEMA aid. She said she applied for disaster assistance for them, to no avail.

“FEMA still hasn’t gotten back to me,” she said. “FEMA’s only empty promises. FEMA’s a total lie.”

Maria said immediately after the storm, she got food, water and shelter from the Red Cross. But all her family’s things were destroyed by the flood, and her personal papers were lost. She isn’t entitled to any compensation; none of her losses are covered by insurance or the government.

While negotiating to get her car back, Maria got a call from a lawyer helping families like hers. The lawyer told Maria she talked to the landlord about the valuable items the family lost in the flood, and she told Maria to call the landlord with a detailed list. But without a car, her husband can’t get to work and the family has no income. She’s basically given up on FEMA. But she said there arepeople who’ve helped in little ways.

She said there was a man at the Red Cross, whose name she didn’t even get, who put her at the top of a list for help. There was a detective, whose card she pulls out of her purse, who was actively trying to help get her car back.

Before we left, the dealership ended up letting Maria have the car and gave her a few days to make a payment. She’s thankful, but said she still doesn’t know where her family is going to live next week, much less what the coming months will hold.