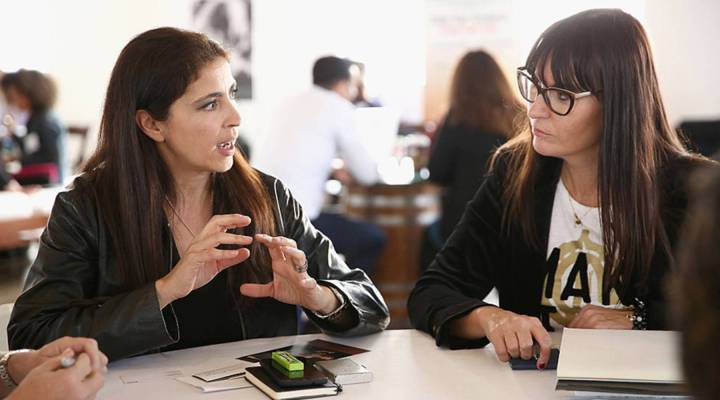 When entrepreneur Kim Taylor began pitching her online education startup to investors, just like the fictional character Alice, she felt like she’d fallen down a rabbit hole where the normal rules of logic no longer applied.  She didn’t just have to prove her idea was solid. She also endured questions about whether the online education market itself was even real.

“And you know, this is a market that has several multibillion-dollar companies in it,” she said.

Of course, said Taylor, investors need to do due diligence, but there was plenty of solid data to make that clear. “That became very bizarre to me that you could present people with, you know, kind of nationally accepted data or information and they just wouldn’t acknowledge it as being true.”

Ultimately Taylor did get her capital. Mark Cuban, the rock star investor signed on and Ranku, the company she co-founded, sold last year for $25 million to John Wiley & Sons. So why did she have to defend the market’s potential? She said that’s the way it often goes for women entrepreneurs.

According to a new study, it’s this kind of gender bias which explains why women entrepreneurs get less funding than men. While venture capitalists invested more than $58 billion in startups last year, women only got 2 percent of that money. The study, published in the Harvard Business Review, says the problem is rooted in stereotypes. Female entrepreneurs get asked different questions by potential investors than men. When men pitch startups they get asked how they’ll make money. But women get asked about how they’ll prevent losing investor’s money. And those questions can have a direct impact on how much funding they receive. Taylor said for her, the study was an ah-ha moment.

“Yeah, that does happen to me. I do get all those questions,” she said. “People wanting to argue with me about a specific campaign and a specific marketing channel on a specific viral coefficient. And you know when we were like one month old as a company.”

Take any brilliant business idea, said Taylor, zoom in to the very pores of the company while it’s still in development, and if you look hard enough you will find some type of flaw.

“It’s almost like they want to have a gotcha moment,” she said.

Dana Kanze, the Harvard Business Review study’s author, led a team of Columbia University researchers to comb through almost 200 videos of entrepreneurs pitching at a TechCrunch funding competition in New York. She tracked the words investors used when asking questions and found they use different words depending on the gender of the entrepreneur. When speaking to men, investors used words like “gain,” “hope,” “ideal,” “accomplish,”  “achieve,” “aspire,” “obtain,” “earn,” “expand” and “grow.” But female entrepreneurs, said Kanze, hear a different kind of language. The questions investors ask them include words like “accuracy,” “afraid,” “anxious,” “avoid,” “careful,” “conservative,” “defend,” “fear,” “loss,” “obligation” and “pain.”

Almost 70 percent of men in the study were asked about their aspirations about making money for investors. But the women were asked about how they planned to avoid losing investor’s money. Kanze said women are set up for failure right from the start. Instead of talking about how they’ll make money, they end up playing defense.

“No one’s going to give you money simply because you prove to them, or show to them that you’re not likely to lose their money,” Kanze said. “They do not invest in any businesses that merely aspire to break even.”

And if you’re thinking a fix is to get more female investors you’d be wrong, Kanze said.

“There has been an uptick in female VCs in venture capital and it’s gone up from about 4 percent a few years ago, to an estimated 7 percent most recently,” she said. “And in that time the gender gap has not improved. In fact it’s widened.”

The problem, she said, is unconscious bias. So women investors ask female entrepreneurs the same questions men do.

But venture capitalist Michelle Dervan, who writes checks for seed investments of up to half a million dollars, and hears two to three pitches a day for Rethink Education, a firm focused on education technology, said they need to.

“I would want to ask all those questions,” she said. “If you’re actually going to make an investment you do really extensive due diligence.”

While Dervan said the study raises additional questions for her, she doesn’t deny that there’s a problem with sexism in Silicon Valley. Quite the opposite. “There’s a little bit wrong at almost every level,” she said.

But notes Dervan, this isn’t just a conversation about what would be nice to have. There’s a financial imperative to bring in more women founders. Many studies, she points out, show that teams with at least one female founder outperform others.

But what to do when you’re hobbled at the early stages and the questions lobbed at you during fundraising meetings are about losing money — not making it?

Before she pursued her study, Kanze was an entrepreneur and raised $3 million  for a startup of her own.

“Especially as the CEO of a company you have to think why am I getting questions around not losing this investor’s money instead of getting asked questions about the vision for the company,” she said. “I was actually repeatedly getting asked these questions and I felt like I was taking crazy pills because no one else was really cognizant of it.”

Kanze said when millions are at stake, company founders want to be diligent and answer investor’s questions. But she said if women are asked about preventing loss, they should talk about making money instead and answer the question they wish they’d been asked.

For Taylor, even selling her company for a check with multiple zeros feels like a bitter sweet victory. “I’m a multimillionaire now and that’s cool,” she said. “But the company could have, and should have been, a much bigger company and I think that always kind of haunts me.”

When she would present data as proof of the size of online education market Taylor was told she was too aggressive. “I just kind of feel like you get to this point sometimes where you can’t win either way.” She’s not sure she wants to put herself through such a taxing process again where woman have to meet a separate, tougher standard.

“It’s sad because now I’m the ideal person you want starting another company,” she said.  But while men are rewarded if they show potential, said Taylor, “when you’re a woman, to get this far, you have to work a lot harder and you have to be a lot better. If you’re a woman, it has to be just so obvious that it just punches you in the face that it’s going to work.”