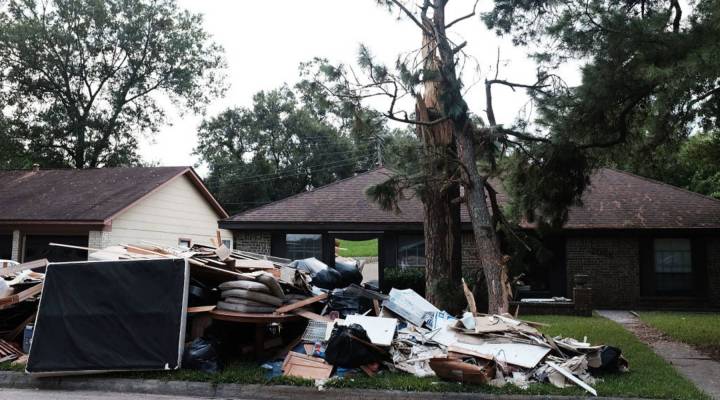 COPY
Discarded items sit outside of a flooded home in Orange as Texas slowly moves toward recovery from the devastation of Hurricane Harvey on Sept. 6, 2017. Spencer Platt/Getty Images

Discarded items sit outside of a flooded home in Orange as Texas slowly moves toward recovery from the devastation of Hurricane Harvey on Sept. 6, 2017. Spencer Platt/Getty Images
Listen Now

Many Texans who were flooded out after Hurricane Harvey are getting back on their feet. But dealing with bureaucracy and the tough logistics of a post-disaster landscape can be an arduous process. It’s certainly been frustrating for one family in northeast Houston.

Melinda Avalos, her husband and three kids have been living in a La Quinta Inn since the rains of Hurricane Harvey flooded the house they were renting, just blocks away. She said her family is sharing one car because the Ford Mustang her husband normally drives to work flooded. He’s back at his job as a long-haul truck driver, and she’s managing everything else.

“I wake up at 5 in the morning, I take my husband to work,” she said. Then she drives back to the hotel, sometimes so crunched for time she doesn’t run up to the room, but instead calls her daughter, saying, “C’mon, we gotta go.” After rousing her daughter, “then I have to get my son ready and take him to school.”

The hotel where they’re staying is full. Employees answering the front desk phones have told callers not to expect any open rooms for at least a month. They’re all booked up with people using vouchers from the Federal Emergency Management Agency.

Avalos said she was impressed with how quickly her family got a $500 direct deposit from FEMA after they registered online. But they’ve heard nothing about any more money from FEMA since then.

She also called. The last time she tried, she said she received a confusing message about when she’d be able to speak with someone.

“First they told me ‘hold time 39 minutes.’ I’m like, ‘it’s not that bad. I’ll just put my phone on speaker and do what I gotta do.’ Five minutes later, 129 minutes,” she explained. “It seemed like the longer you hold, the longer it took for someone to get on the phone.”

She said her landlord is fixing up the house so they can move back. It’s far from ready, but she’s been going there almost every day to use the gas stove.

“I would buy food at the store and I would take it to the house and cook it,” she said. “I put it in Tupperwares and brought it back to the hotel.”

The Avalos’ hotel voucher will run out soon, and they don’t have a date for when their home will be fixed up enough to return. The family didn’t have renters’ insurance, which means unless they get more money from FEMA, they’ll have to foot the bill to replace their beds, all their furniture and everything else.