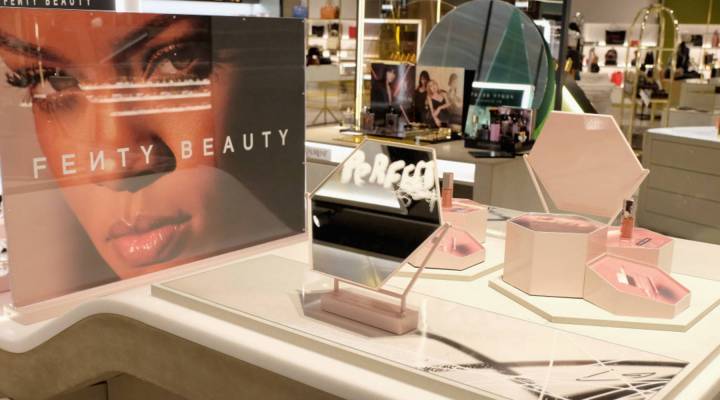 “Women that are of Afro-Latino, African-American, Afro-Caribbean, when I get Indian and Middle Eastern women … you know, the brown girls. Usually have to mix when I get the brown girls,” said Cooper, who works in fashion and entertainment.

She mixed four shades of foundation to create one that worked for Mcfarlane. She did this with almost every product: concealer, powder and blush. For some women of color, it’s normal to play makeup chemist every morning, Mcfarlane said.

“And I’m just like, “How?! How is this possible?” said Mcfarlane. “How are there all these makeup brands and not one of you guys could, like, find a shade that actually not only gives me, like, what my skin needs, but it also takes care of, like, my undertones?”

Enter Rihanna. The pop star worked for two years with Kendo, a beauty brand developer, to create her Fenty Beauty line (her full name is Robyn Rihanna Fenty). It launched this fall, and it’s selling out online and in Sephora stores. Its Instagram account had 1 million followers within days of its launch. People have been cooing over its 40 foundation shades, even though brands like Make Up For Ever and Maybelline offer just as many.

“It’s not just about sort of adding more color to make the makeup darker, but to really understanding the varieties of skin tones and skin textures within people of color,” said Tiffany Gill, a professor of Black American studies at the University of Delaware who writes about black beauty and culture.

Brown isn’t just brown. It can be cool, warm or neutral. Rihanna offers these subtleties for each foundation color. Without them, makeup on brown skin can look ashy and painted on.

Some of Fenty’s popularity lies in its messaging. The ads feature a color wheel of women, and one is wearing a hijab.

“I think there’s still a great deal of fear in a culture that has celebrated and equated whiteness with beauty of putting women of color at the forefront of such a campaign,” Gill said.

Rihanna created a new space in the $430 billion beauty market. But other brands are likely to follow with a “multiculturalism is mainstream” message, too. There’s no shortage of market — mint.com says that the average woman spends $15,000 on makeup in her lifetime, and women of color often spend more.