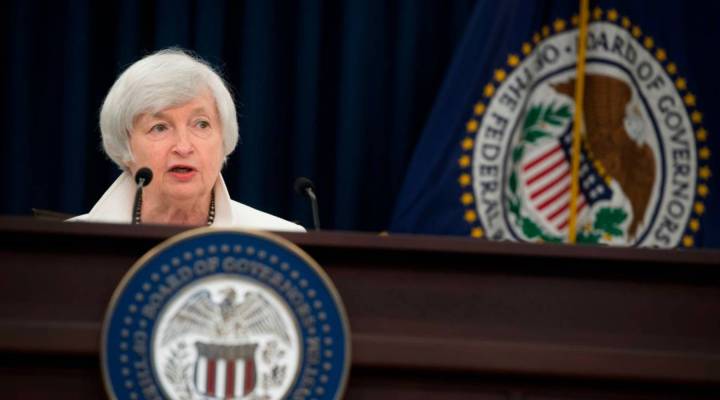 The macro-economic number of the past decade or so has been “two,” as in 2 percent, the Federal Reserves inflation target. The thing is actual inflation, as in the economy, hasn’t been playing along with the Fed. It has been running steadily below 2 percent as it pleases, thank you very much. Exactly why inflation’s still so low, despite an unemployment rate that should be helping to drive prices up, is a mystery to the Fed, and a subject of interest to former Fed governor Daniel Tarullo. He wonders if maybe we’re doing it wrong. He’s got a new paper out from the Hutchins Center at Brookings called, “Monetary policy without a working theory of inflation.” Marketplace host Kai Ryssdal spoke to him about what that paper said and what it means for the larger economy. The following is an edited transcript of their conversation.

Kai Ryssdal: So let me ask you a couple of questions about inflation and this paper you wrote and I’m going to need some explanation here. I’m going to read your sentence and you’re going to decipher it for me. “The substantive point in this paper about monetary policy and inflation,” you say, “is that we do not at present have a theory of inflation dynamics that works sufficiently well to be of use for the business of real time monetary policy making.” What does that mean?

Daniel Tarullo: Although the models, like relationship between unemployment and inflation, help you directionally to know whether it’s more likely you’re going to get more inflation or less likely — on the basis of all the research that’s been done — we don’t have coefficients within those models that have very much predictive power at all, in what I call a real time basis. Which is to say you’ve got to make monetary policy decisions every six to seven weeks. And when those relationships have attenuated, as they have, it means that you can’t just rely on the model, which, by the way, is not only not a surprise to many economists but of course it’s good economists themselves who have documented that fact.

Ryssdal: Well right. And also you go on to say, just to demonstrate good intentions here, you go on to say that the folks you worked with on the Fed, they know this. They understand it, and yet somehow they are still captive in some way to this idea that we’re going to have to look at these numbers and figure out what to do.

Tarullo: Yeah, ’cause we do have to figure out what to do. And everybody has to take a position that each FOMC (Federal Open Market Committee) meeting, people tend to fall back a little bit on the things that they were trained in. And as you know, for an economist the saying “it takes a model to beat a model” is a very is a very powerful one. And so in the absence of another model that seems to have more predictive power sometimes, at least some macro economists, do find themselves falling back on a reliance on the old Phillips curve, which is the relationship between unemployment and inflation, to a greater degree than they would if you engage them in a conversation in which you said, “Well doctor X how much predictive force do you think this has?” And of course they would say we understand it doesn’t have a whole lot.

Ryssdal: OK so does it matter? Obviously it’s important to the folks who gather around the big table in the Fed building every six or seven weeks, but does it matter more broadly if the Fed doesn’t have an actual model and instead has to sort of go with what it’s got?

Tarullo: Well I think it it depends is the answer. If people are hewing to the concept of a model and acting as if they believe that on a meeting-to-meeting basis it’s having an effect, then I think you do have the potential for policy mistakes. For example, a year or two ago, raising rates more than we certainly know in retrospect would have been necessary. But if, as I think many members of the Fed do, there is an effort to say we can use the model as a starting point but then we have to look at observable data and we understand we have to look at all the potential things that are going on that may be pushing up or tamping down inflation.

Ryssdal: This paper came out in the same week or two-ish period that Chair Yellen gave a speech in which she confessed to the Fed’s imperfect understanding of inflation and how low inflation is still a mystery. I don’t want to sound alarm bells but it’s a little alarming that the Fed Chair goes, “well, we don’t really know.”

Tarullo: If I were a member of the public I would take it as more reassuring. And the reason I would take it take it is reassuring is we have an incredibly accomplished chair of the Fed and she’s saying to the American public, look I’m not going to try to suggest to you that we totally understand it, instead I’m going to tell you exactly what we see. And she then proceeded to go through her analysis of all the different factors and then she showed you where her predisposition was, which was an expectation that as labor markets continue to strengthen, we will see some movement back towards the 2 percent inflation target and that, in her mind, was a reason to continue on the path of gradual rate increases that she set a couple of years ago.

Ryssdal: Without the expectation that you’ll give me a straight answer on this one, and so I won’t actually waste the time in asking the question, I do wonder though what you make of the maneuvering around whether or not sure Yellen is going to get her job reappointed?

Tarullo: I think any time there is an incumbent chair, when the president of another party or someone who did not originally appoint that chair, there are a lot of factors that go into deciding what the best thing to do is. I mean if I were in an administration, and obviously I’m not, to me the most important thing in any Fed chair is whether that individual will be able to provide really good stewardship of the economy. And that means intellectual leadership in times that are not all that predictable. It means the capacity to lead internally because you have to forge a consensus. People do not walk in lockstep just because the chair says she are he wants to do something. And third someone with credibility in the markets, it’s not as though people in the markets just want to be told what they would like to hear, they want they want to believe that the person saying it knows what she’s talking about.