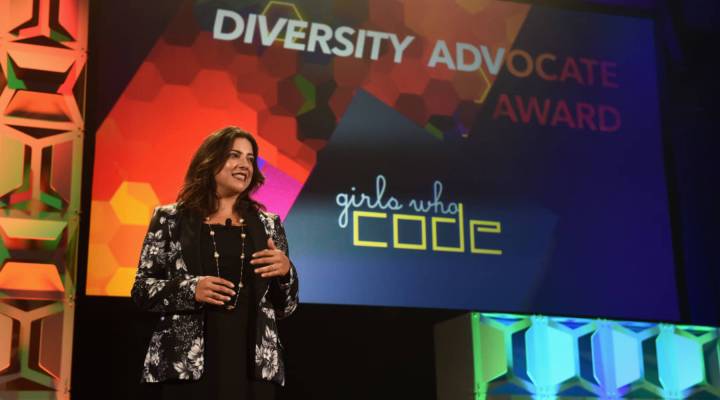 Silicon Valley has a gender problem, one that many of the largest technology companies have said they want to fix. But how do you hire more women if they’ve already been discouraged from pursuing tech and engineering when they were in school? And how do get young women and girls interested in coding before they start their careers if they don’t see other women in those jobs already?

It’s a problem that Reshma Saujani, the founder and CEO of Girls Who Code, wants to solve. Her nonprofit is trying to close the Silicon Valley gender gap within 10 years with after-school clubs and summer programs specifically geared at getting more girls interested in coding and careers in tech. And most recently, Girls Who Code launched a new series of books about a group of girls who join a coding club at their school that Saujani compares to the Baby-Sitters Club. She talked to host Kai Ryssdal about how a failed bid for Congress started it all, how some of the biggest tech companies responded to her elevator pitch and why the real problem is bro culture.

Reshma Saujani: Well, Girls Who Code’s a movement, you know, were a nonprofit, but we like to say it’s a movement, and our goal is to close the gender gap in computer science and technology. So basically, over the past 40 years, we’ve had this dramatic decline of women in tech. If you walked into a computer science classroom in the 1980s, almost 37 percent would have been female, and today that number is less than 18 percent. It’s kind of crazy, right? At a time where technology is a part of everything that we do and automation is changing our world by the minute, we’re leaving girls behind.

Ryssdal: Yeah, so how did you come to this?

Saujani: I’m a total weird person to lead this movement. So, you know, when I was 33 years old, I—

Ryssdal: Which was how long ago?

Saujani: Oh, my God, I’m 41 now. Thank you for starting this morning with depressing me.

Ryssdal: Context is everything.

Saujani: I ran for Congress at 33 in a New York City Democratic primary, and as part of that experience, I would go visit schools, and I’d go into computer science classes and robotics labs. And I saw a lot of boys, and it didn’t make sense to me. You know, I’m the daughter of refugees. My parents came here with nothing. And I always feel like, you know, I’m very much the product of the American dream, and I really believe that girls are being left behind because the world’s changed. You know, 45 percent of all of our breadwinners today are women, and they’re not going into the jobs of today and tomorrow where they can make $120,000 a year.

Ryssdal: I was in Seattle the other day talking to Satya Nadella at Microsoft. Yeah. And he said, “You know, we see girls being interested in this stuff at 11 and 12 years old and maybe even a little older, but then they get out there and they discover as female professionals in the computer sciences that it’s terrible. There’s misogyny, and it’s sexism, and it’s awful.” Are you hoping to overcome that by volume, right? Getting more women out there?

Saujani: A thousand percent. And it starts earlier than that. I have had so many girls say to me, “I’m the only girl my computer science class. And after a couple of weeks, I didn’t want to be the only girl my computer science class.” So part of why we wrote this book is to change what a computer scientist looks like, to make it fun, to make it interesting. And the only way you change the misogyny and sexism that you’re seeing in the Valley is pure infiltration. Numbers, numbers, numbers. You need to create a critical mass. And I think that we can do that. I think we can do it in less than a decade.

Ryssdal: When you went to Facebook, and Google, and Apple, and Microsoft and said, “I got this idea, give me money” in essence, what’d they say?

Saujani: Yes. Yes, yes and yes. And one was often the women.

Ryssdal: Which is kind of problematical, right? I mean, it’d be nice if you could get in front of Tim Cook and Nadella and Zuckerberg —

Saujani: Well, I do. And, you know, for example, at Twitter, who was one of our very first partners, it was Dick Costello [former Twitter CEO] and Jack Dorsey [one of the founders]. Men are a huge part of this movement, not just from a CEO perspective but from a dad perspective.

Saujani: The bros are the issue because they’re turning girls — I mean, I was thinking about this. You always think that there’s a difference between East Coast and West Coast wealth, right? The East Coast are kind of the hard-nosed hedge fund guys that, like, have been treating women like crap forever. And the West Coast guys are younger, grew up with feminist moms, and they’re supposed to be a little bit different. And unfortunately, what we’ve seen in the past couple months is they’re not that much different. And when misogyny rears its ugly head, they’ve got to shut it down.

Ryssdal: You said a minute ago you think you can get it done in a decade. We’re at the five year mark.

Saujani: Well, Girls Who Code is at the six-year mark. And, you know, we’ve taught 40,000 girls to code. I’m going to have 10,000 new computer science graduates on college campuses in 2018. But it’s not just me in this movement. There’s a lot of amazing people that are investing in this. But we got to continue to put resources behind this. It’s one girl, one coder, one book at a time.

Corner OfficeShelf Life
Tags in this Story
Share this Story