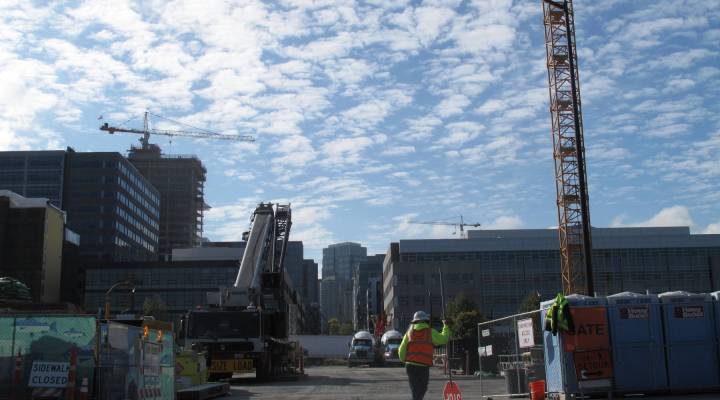 COPY
A construction site for Google's expansion in Seattle's South Lake Union. The neighborhood is home to Amazon's first headquarters and other major tech companies. Anna Boiko-Weyrauch/ for Marketplace

A construction site for Google's expansion in Seattle's South Lake Union. The neighborhood is home to Amazon's first headquarters and other major tech companies. Anna Boiko-Weyrauch/ for Marketplace
Listen Now

Two dozen people zigzag through Seattle’s South Lake Union neighborhood, footsteps crunching on pavement and gravel. A local blog called The Urbanist organized the tour about the history of this neighborhood — the location of Amazon’s first headquarters.

In a few years, the view around HQ1 has morphed from low-slung warehouses to tall, modern apartment buildings and cranes that poke out of construction sites around every bend.

“It looks like a millennial paradise,” said Seattle resident Anthony Bridgewater, who took the tour.

Cities across North America are sending their best pitches to Amazon to host the company’s second headquarters. Seattle is among the cities making a bid, but the city’s residents are split between those who are wringing their hands over the company’s possible expansion in a different location, and those who say “no thanks.”

Seattle’s recent changes are dizzying. Just two metrics: in 10 years, the population has increased over 20 percent and the median home price has increased around 50 percent to $730,000.

The region is home to a lot of Fortune 500 companies, all driving growth, though Amazon is Seattle’s largest employer.

Pam Carter has lived in Seattle for decades. She and her husband recently moved across town after selling to developers who put up a five-story apartment building.

“Our house no longer exists,” she said. The tour passes one high rise. Carter remembers when it went up. “You suddenly couldn’t see the Olympic Mountains. And I hated that,” Carter said. Sometimes she gets lost without landmarks­­­ in sight, she said.

Terry Franguiadakis moved to Seattle in the ’90s.

“We felt like it was an empty city,” he said. “There was a lot of parking lots. It was kind of desolate.” Now it gets more vibrant every year, he said, with good restaurants, people living in the city and milling around the streets. “I think it’s great,” Franguiadakis said.

But, the city wasn’t prepared for the boom, especially not in the housing market, said Ethan Phelps-Goodman with the organization Seattle Tech 4 Housing.

Amazon’s next host should get ready quickly, so low- and middle-income people don’t get priced out, he said.

“You’re going to need to build abundant housing to go along with all those jobs that are going to stream in, not just for the Amazon employees, but for the restaurant workers, and the baristas, and the security guards, and the many, many jobs that will be created by all the new wealth,” Phelps-Goodman said.

According to Amazon, the company’s presence is a boon to Seattle’s economy, and the company gives back to the local community through philanthropy and volunteering.

The company will announce the location of its second headquarters next year.