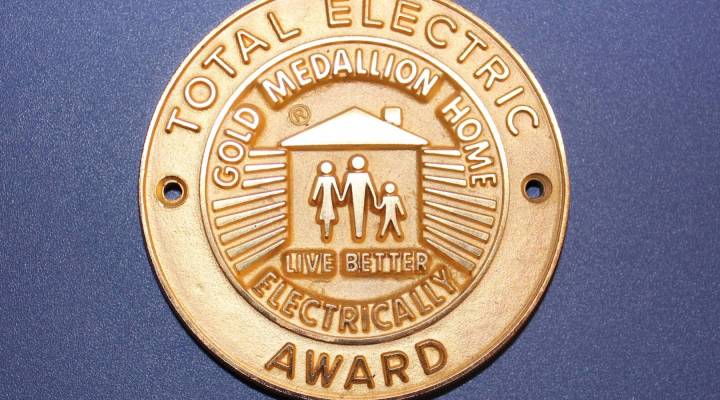 COPY
The National Electric Manufacturers Association (NEMA) once issued medallions like this one to promote the all-electric home and spur demand for electric appliances.  Photo courtesy NEMA

The National Electric Manufacturers Association (NEMA) once issued medallions like this one to promote the all-electric home and spur demand for electric appliances.  Photo courtesy NEMA
Listen Now

Not long ago natural gas – the fuel that probably gave you your hot shower this morning – was being hailed as the clean “bridge” fuel, because it polluted less than other alternatives. For some purposes it still is, such as when it replaces diesel fuel in buses. But in our homes, some now believe natural gas should be phased out in favor of electric appliances, for climate reasons.

There is already a trend to convert from gas to electrical power. One out of every four homes in the U.S. is all-electric, according the most recent survey from the U.S. Energy Information Administration. The trend is strongest in the south. Golden points out that electricity is increasingly made with clean solar and wind. “Right now people understand the benefit of having an electric vehicle, and soon I think they will also understand the benefits of having all-electric homes,” she said.

When it is burned, or particularly if it leaks out unburned, natural gas contributes to climate change. Dan Thomsen, a contractor who specializes in air quality, said it probably wasn’t optimal to put combustion appliances inside living spaces.

Thomsen and several others recommended a type of heating and air conditioning known as heat pumps. He believes the future is electrification of homes. Mauzy Heating Air & Solar, a heat pump vendor and installer in San Diego, also praised heat pumps, but said the company has seen no uptick in sales. It recommends them for people who have solar systems on their roofs, because that electricity is paid for.

Sean Armstrong of Redwood Energy, which specializes in all-electric construction, recommends heat pumps for many more situations than just solar homes. He installs them in affordable apartment buildings across California. “A refrigerator uses more electricity for heating and cooling than a heat pump in an apartment,” Armstrong said.

Gabe Harris, a principal gas analyst with Wood MacKenzie said a switch to electricity for heat or the hot water heater may cost you.“The truth is it is still more expensive than gas in most of the uses that we use it for right now,” he said. When people switch from gas to electricity, sometimes they have to increase the electrical service to the circuit breaker box, another cost.

Harris agrees electricity is getting cleaner. But he said putting up wind turbines and solar farms takes fossil fuel, too. They require a lot of concrete, and the energy for making and pouring concrete comes from fossil fuels.

Still studies show wind and solar farms tend to make up for that fossil fuel use not too long after they start operating.

This report comes from inewsource, an independent journalism nonprofit in San Diego.