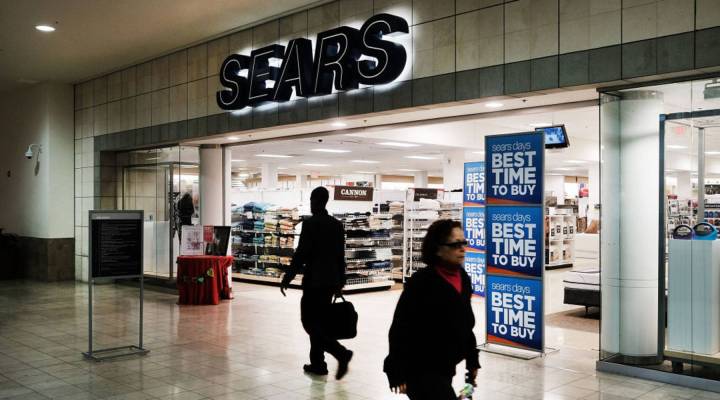 “You know the lady that’s following you around, trying to spray you with the perfume?” she said. “That’s me.”

Traylor, 52, is a freelance fragrance specialist at a Macy’s store in Los Angeles.

She started working at Macy’s in 1994, when her daughter, Elyse, was four. Now, she’s 28, and they still live together.

“She pays half of the bills,” Traylor said. “She knows that if she moves out, her mom will be homeless.”

Traylor said she needs three jobs to cover her expenses. She works about 20 hours a week, for $20 an hour, at Macy’s. She’s also a home health care worker and a community organizer. Traylor has watched, anxiously, as Macy’s has announced store closures around the country — 65 this year.

“I had to immediately Google to see which stores were closing to see if it was going to affect me,” she said. “Fortunately, that round, you know, we survived. But who knows what’s going to happen?”

There are 31,000 fewer retail jobs now than there were a year ago, according to the Bureau of Labor Statistics, with thousands of store closures at retailers like Payless, Macy’s, Sears, Vitamin World, Radio Shack, and The Limited.

In New Jersey, that turmoil has Elizabeth Laureano wondering if she chose the right career. Laureano, 43, was laid off in April from her job as a manager at a New Jersey Radio Shack store. The electronics retailer filed for bankruptcy protection this year, and it’s closing more than 1,000 stores. Laureano remembers having to tell her employees they were losing their jobs. “The questions are ‘Why? Like, what’s going on?’” she said. “And then you have no explanation, because you don’t even know why you’re closing.”

Laureano started working in retail about 14 years ago. “Retail was something that was happening, the money was there,” she said. “But now it’s like, where are we going with this? Why are we closing so many stores? Why are so many people losing their jobs?”

She found work as a greeter at a Sprint store, where she took a pay cut that leaves her short about $2,000 a month. She said she needs that money to take care of her three kids and her grandson. Does she feel financially secure? “Not at all,” she said. “I live day-by-day, and I leave it in God’s hands.”

Laureano’s job at Sprint provides a paycheck, at least. But it isn’t always possible for a laid-off worker to find another job in retail.

“It’s one thing if it’s one store within a bigger mall and they can just go onto the next store,” said Carrie Gleason, an expert on retail employment with the nonprofit workers’ advocacy group,  the Center for Popular Democracy. “But if it’s a regional area where there are some malls that are really struggling, where are they going to go?”

Job losses hit hard in retail, Gleason added, because many workers live paycheck to paycheck, with nothing to fall back on.