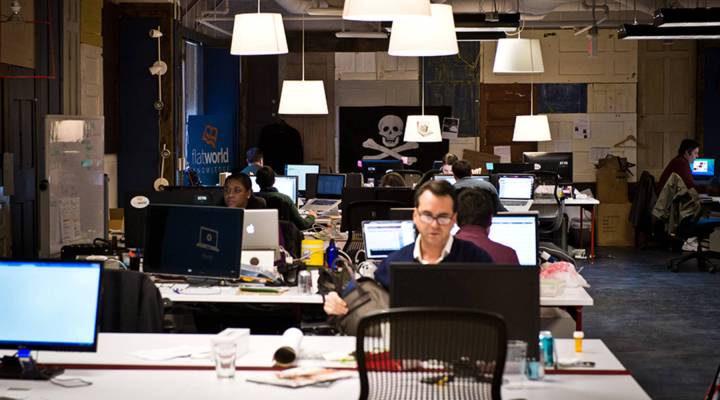 Employees of startup companies work at the offices of a business incubator in Washington, D.C. MLADEN ANTONOV/AFP/Getty Images
Listen Now

It’s safe to say that there’s a growing concern about tech and how it fits into our future. Our data is being sold, ads that we can’t trust are being spread on social media and robots may be coming for our jobs.

Tim O’Reilly is a venture capitalist, futurist and author of the new book “WTF: What’s the Future and Why It’s Up to Us.” He says tech needs to do better, and it starts with how we fund it. Below is an edited excerpt of his interview with Marketplace Tech’s Molly Wood.

Tim O’Reilly: I’ve been worried about the current state of the economy. And in particular, I could see coming years ago that people were increasingly afraid of technology. And optimism about the future has been a huge, driving positive force in the economy. And once we become afraid of technology, we become afraid of progress. Bad things happen. And I feel that the tech industry deserves some of the blame for that. Because all we’ve been talking about is disruption — what we’re going to destroy. And the kinds of values that are often espoused by the tech industry really are an anathema to the main street economy in which many people live.

Wood: Where does venture capital fit in, which you say is problematic even though you are in this industry yourself? Is there an alternative?

O’Reilly: You know, all the early VCs, they were investing in companies that they thought would be long-lasting companies. That was their goal, to create companies that would be around, that would employ people, that would make products for a long time. And some of them, you look at the early companies out of Silicon Valley — Hewlett-Packard, Intel — they are still around. And I look at a company like Google, real business; Amazon, real business; Facebook, real business. But there are a lot of companies, increasingly, as more and more capital flooded into the sector, that were really just bets that we can make an idea that somebody will want to acquire. And having been around and watched lots of acquisitions, I see a lot of them don’t really succeed. And actually, the dirty secret of venture capital is in times like these, when capital has been so abundant, that you can actually make a lot of money as a VC without actually ever returning any money to your investors. And so I think the thing for VCs is they’ve gotta re-commit to not placing bets, but building businesses. And I do think that there is a difference.

Wood: You could argue that tech, even just in the past few months, maybe even weeks, has sort of also started to become the bad guy. What does that start to look like?

O’Reilly: I’m not sure where it goes from here. I started an event a couple of years ago called the Next: Economy Summit because I saw this coming. And I think it is an opportunity for reflection on the part of the industry.

Wood: So who would you love to read this book then? Who is the ideal reader for you?

O’Reilly: There’s several ideal readers. I want VCs to read it. I want entrepreneurs to read it. There’s all these companies that built — we got $30 or $40 for a book, or a thousand dollars for a conference, and someone went off and started, and in some cases they told us, with the aid of one of those books, a multibillion dollar fortune. And I go, wow that’s awesome. Because that’s the mark of success. You know, people in Silicon Valley like to talk about exponential returns. And I go, “Exponential means it gets bigger for everyone. Not just exponential in what you get to get for yourself.”