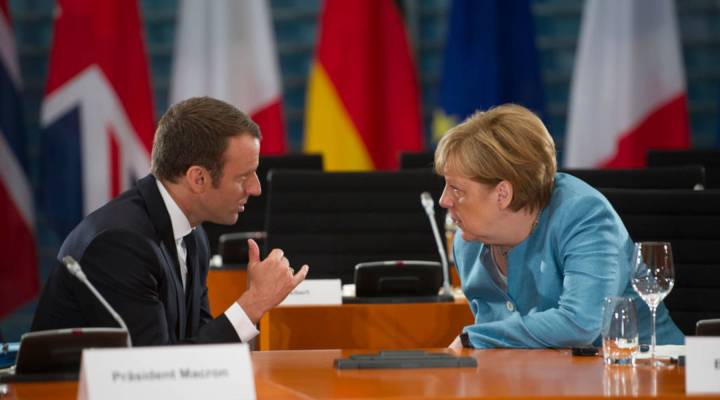 COPY
“[French President Emmanuel] Macron and France are incredibly important to Germany and the stability of the European Union, now with Britain out,” says Christian Odendahl of the Centre for European Reform. Above, German Chancellor Angela Merkel and Macron talk before the G20 Summit in June in Berlin. Steffi Loos-Pool/Getty Images

“[French President Emmanuel] Macron and France are incredibly important to Germany and the stability of the European Union, now with Britain out,” says Christian Odendahl of the Centre for European Reform. Above, German Chancellor Angela Merkel and Macron talk before the G20 Summit in June in Berlin. Steffi Loos-Pool/Getty Images
Listen Now

The new president of France, Emmanuel Macron, has a plan to ease many of the European Union’s recent crises, including debt, immigration controversies, the rising prominence of populist political parties and the British decision to pull out of the bloc.

Macron recently laid out an ambitious reform program entailing much closer cooperation between the member states on defense, immigration and economics. Macron would like to see a single budget for all 19 countries that use the euro supervised by one finance minister and able to funnel money swiftly into the weaker member states.

Macron needs the support of Germany to advance his agenda. Will he get it ?

The German leader, Angela Merkel, can hardly respond to Macron’s initiative from a position of strength. She has been weakened politically at home after suffering a setback in the general election last month that has allowed, for the first time since World War II, a far-right party to enter the German parliament. Merkel will have her hands full over the next few weeks and months building and holding together a fragile ruling coalition. But even without these domestic distractions, the German chancellor may not have reacted with much enthusiasm to Macron’s euro zone plan.

“Germans suspect that behind every reform proposal on Europe is an attempt to get at German money,” said Marcel Fratzscher, head of the German Institute for Economic Research in Berlin. Macron’s euro zone budget proposal will raise fears that Germany may have to bankroll the currency bloc. “Germans say, ‘Look , the other Europeans, they have lived beyond their means by spending too much and running up debt. And now they want our money,'” Fratzscher said.

That’s certainly the reaction of one of the key parties heading into Merkel’s new coalition. The right-of-center FDP is strongly opposed to any closer integration in the euro zone and  believes that France, which hasn’t had a budget surplus since the 1970s, should put its own house in order before trying to reform Europe.

“French reform and particularly fiscal reform and a stronger growth rate will be a prerequisite before there’s any German agreement to further risk-sharing in the euro zone,” said Emily Mansfield of the Economist Intelligence Unit in London.

But Macron will not be rudely rebuffed. Christian Odendahl of the Centre for European Reform in Berlin said the new coalition government will tread carefully and try not to upset the new French president.

“Germany does know, and I think the FDP also knows, that Macron and France are incredibly important to Germany and the stability of the European Union, now with Britain out,” Odendahl said.

The difficulty for Macron’s European vision is that too many uncertainties still cloud the EU horizon, from Catalonia to Brexit to political paralysis in Germany. Even Macron himself may soon be preoccupied with unrest in France over his labor market reforms.

Not enough member states appear to have the stomach for a radical overhaul of  the EU.

“I have doubts that Europe will, over the next few years, really have dramatic changes or dramatic reforms, which really are a leap forward in terms of completing the euro and making it sustainable,” Fratzscher said.