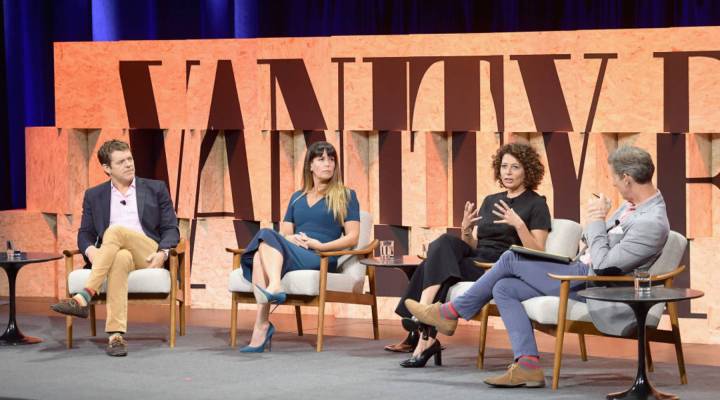 Vanity Fair’s New Establishment Summit in Beverly Hills celebrated the top 100 power players in the entertainment industry this week. Marketplace host Kai Ryssdal hosted a panel discussion about the state of the movie business with Jason Blum, founder of the low-budget production company Blumhouse; Donna Langley, the chairwoman of Universal Pictures; and Patty Jenkins, the director of “Wonder Woman.” An edited transcript of the panel is below, starting with Jenkins saying how she feels about the all-important Hollywood pitch meeting.

Patty Jenkins: Honestly, it’s — I feel the same way about making a movie as I feel about dating. Like, I don’t have any desire to sell or force, you know, like I’m not trying to force anything. I feel like it’s always like “Is this a good fit?” They should pitch to me and that’s fine. I think that’s great. If they have something that they want to do, maybe I’ll be the right match for it. Maybe I won’t. And don’t try to date somebody who’s not right for you and then change who they are. I think it’s important that I really hear them and they really hear me. And you’re able to say, “I think we could do something that we believe in.”

Jason Blum: I would extend that to the “pass,” which is where all of us are out there trying to sell our movies and TV shows all the time, and we’ve all been doing this a long time. And the one thing I cannot tolerate for exactly the reason that you said is someone telling me why my TV show or movie is not good. It’s not for you, of course. This date is the wrong match. I got it. So I always say, “Please, if you’re going to pass, keep it short and say it’s not for me.” Just like a bad date.

Kai Ryssdal: We had the standard pre-conference call about a week or so ago, the four of us, to sort of get to know each other and figure out how we were going to go on this conversation. And I said, I think, at the beginning when I joined the call, “Listen, I think is really interesting this conversation because we’ve got the micro, we’ve got the blockbuster and then we’ve got the person in the middle.” And I said, “Donna, I really think there’s still a place for you in this economic ecosystem.” And you said you were surprised to hear me say that and relieved. And I want to know why you were surprised that people think there’s still a place for studios in this content world that we have?

Donna Langley: Because I think, well, you know, obviously, you know, with the proliferation of content and consumers, including myself, enjoying, you know, the the ability to see content in a variety of different ways, our job, as people who are doing that for a studio and for the theatrical, is to make films that are inherently theatrical. And so yeah, we have to kind of wow them.

Blum: Studios are vital for filmmakers, for artists, because they make the world aware of what we’ve done. It’s the marketing and the positioning and the conversation around what we’re doing. It’s you know, it’s not as fun to make a movie if no one sees it. And I really think that in the movie business, the movie is 50 percent of the job and the marketing is the other 50 percent of the job. And if you don’t get both those right, it’s not nearly as fun.

Ryssdal: Well, so granting that point, do you too, and let’s pretend that the studio heads not sitting here, do you care how and where audiences and consumers get your content?

Jenkins: I don’t think that I have only one preference. I think it depends what the film is. But “Wonder Woman” I definitely think we made it to play in a theater. You know, people will see it elsewhere and that’s what they’ll do. But it’s a big experience and it’s made to be a shared experience. You know, it’s designed to be a shared experience. Other things I’ve made I feel are absolutely right to watch in a more intimate space and at home or on a smaller screen. But I think it definitely matters.

Ryssdal: OK, so Donna, to that point of you being the facilitator in some ways of what these two do, you’ve got your giant tent poles and you’ve got your micro budgets. Giant tent poles, you can make a zillion dollars. Micro budgets, you know, you may or may not, but it’s going to cost you a million dollars whatever it is. Where is the space for the middle? For the filmmaker who wants to make a — I don’t even know what a mid-market number is — $30 million? I mean, where is that space?

Langley: Yeah, in that 30, 40 million dollar range. There is a market for it. Absolutely. We’ve actually done very well with with movies like I think “Straight Outta Compton” would fit right into that. “Mamma Mia,” probably. “Pitch Perfect,” now where we are in that franchise. They are all considered mid-budget movies. And I think the common denominator between those films is that there are films that are made for a specific audience. They’re delivering a specific experience, whether it be a musical or, you know, in the case of “Mamma Mia,” or “Fifty Shades of Grey” even, they were delivering to the female audience. And so I think the way you can hit the sweet spot is where you can get something, you can deliver something for an audience, particularly an underserved audience, and create some spectacle and some scope and deliver a really great compelling reason to, you know, get out to the movie theater. I think where we get into trouble is if it’s a film that is trying to sort of serve too many masters, and it maybe doesn’t have a big enough idea to support the budget that it has. I mean, that can happen oftentimes. You know, the budget can rack up depending on who’s in it and who’s directing and things like that. So I think that’s definitely the space to avoid. But, you know, I really do I think that there is room for all different types of budget ranges within the studio system.

Ryssdal: Since you brought up the idea of the female audience, Patty, and since, you know, you’ve got the movie with the female protagonist the female director that has been remarkably successful, there’s an obligation to ask you this question: Is it a good thing we’re talking about female audiences and female protagonists in hit movies made by female directors, or would you rather we get to the point where you don’t have to talk about it and you just get to make your damn movies?

Jenkins: I mean, definitely I’d rather we get there. But obviously we’re not there, so it’s a conversation that has to be had and I’m honored to be a part of. But, what I’m always amazed by is, if it’s understood that we can make a universal film about a turtle, why is it not understood that you could make a universal film about all kinds of people. And that it doesn’t make it a turtle movie and a woman doesn’t make it a “woman” movie. You know, universality is universality if we focus on it that way. And so, that’s why I want to make great films about the life experience, and they maybe have female leads a lot, you know. But I don’t want to make movies about being a woman necessarily when I do that. Maybe I will. Maybe I won’t. But it’s not what it’s about to me. It just happens to be a woman. And so, you know, “Wonder Woman” was about being a hero.

Ryssdal: Jason, can you go to movies now with an unjaundiced eye.

Jenkins: Well, I don’t know, because I haven’t gone to them. For the last two and a half years, all I’ve done is make “Wonder Woman.” So no, I don’t, I don’t go to the movies at all.

Ryssdal: Donna what about you? Can you go to the movies just for the hell of it anymore?

Langley: I actually love just going and completely losing myself in a movie. Someone else’s movie that I don’t have to watch and think about all of the pain and suffering to get it to the screen.