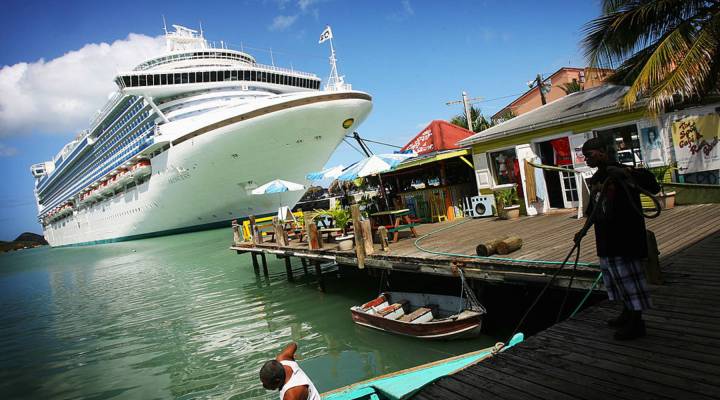 Fishermen tie up their wooden boat next to a cruise liner in St John's, Antigua. Chris Jackson/Getty Images

Fishermen tie up their wooden boat next to a cruise liner in St John's, Antigua. Chris Jackson/Getty Images

Having survived the hellish commute to your office, you settle in your cubicle. Tired of staring at the blank wall above your computer screen, you close your eyes and imagine you are somewhere warm and pleasant. There are palm trees. A lot of sun. Instead of being stuck in the 9-to-5 hamster wheel, you imagine yourselves working on a cruise ship.

However, as it turns out, trading your cubicle for a cruise ship might not be as easy as you’d think. To find out what it takes to get hired on a ship, Marketplace caught up with Brian Perez, a manager of fleet recruitment at Norwegian Cruise Line. Perez was in Washington, D.C. looking for people willing to work as servers, cooks, and more aboard the Pride of America, which stays in Hawaii year-long. Here is what we learned:

1. Due to maritime regulations, it could actually take months before you step a foot on the ship.

It can take months from the time someone attends a recruiting event and the time they join the crew on the ship. The onboarding process is extensive due to maritime regulations. Potential members of the crew are required to attend a week long training by the Coast Guard that includes firefighting, personal survival techniques and first aid. At the end of the training, candidates have to pass examination before they can join the crew.

2. You will be away from your family and friends for months and will get home sick.

The real test, however, comes once the candidates are on the ship. If they make it through the first couple of months on the ship, that’s when they have really made it. Cruise life round-the-clock, week after week, is not for everyone.

“Not everybody wants to be away from home, away from family and friends. You will miss weddings and birthdays and anniversaries and those are just the realities of working away from home,” explained Perez. “That first month on board is make or break because you’re dealing with the homesickness. You’re learning a new job in a new place you’re living in a new environment away from everyone you know. So it’s everything all at once. And that’s kind of a difficult part.”

Once hired, employees work on the ship for about five to six months before getting a chance to go home for a few weeks.

Being home sick can be a problem for cruise line employees, admitted Richard Fain, Royal Caribbean Cruises CEO, while appearing at the Skift conference in New York on Tuesday, September 26.

“Our employees come from all the world,” he said, pointing out that his cruise line employs 67,000 people. “What they do, I am in awe. They are amazing.”

Since employees can be on a ship for months at a time, the company provides all of them with a tablet so that they can call home. According to Fain, happy crew makes happy guests.

“Ours is still a people business,” he said.

3. You need to consider the entire package when making your decision.

With an unemployment rate at 4.4 percent, each month companies are competing for a limited number of employees. Perez, who recruits potential employees across the nation, says it’s not the unemployment rate that might have an effect on the cruise line’s recruitment, but rather the wages offered by other employers. Some states — such as New York and California — have also moved to increase their minimum wage to as much as $15 an hour, which could make it difficult for some business to compete.

“When you talk about minimum wage in different states being so high, those kinds of things start to affect different [job] markets,” said Perez. “We haven’t had to really close down markets yet, but it’s things we are keep an eye on. Those kinds of things would have more of an effect for us than the unemployment rate at this time.”

So what’s a typical pay for an entry-level job on a cruise ship? “It’s competitive to whatever the land-based equivalent would be,” said Perez.

When deciding whether to take a job on the cruise ship, candidates should look at the entire package, he added.

“You’re getting room and board for free. All your meals are provided. We fly you to and from Hawaii for free. All of your needs are taken care of so whatever you pocket, it’s yours to save,” Perez pointed out. “So maybe the salary is not exactly what you would get on land, but you don’t need to take Uber or taxi or have a car payment or rent. It balances itself out.”

Employees are not taking the cruise, they are working to make the cruise fun for passengers. “One of the perks is yes, you live in Hawaii on a cruise ship, but the majority of your time would be at work on the ship not in Hawaii,” said Perez. “So we always like to say: ‘You work in a ship that’s in Hawaii. You do not work in Hawaii.’”