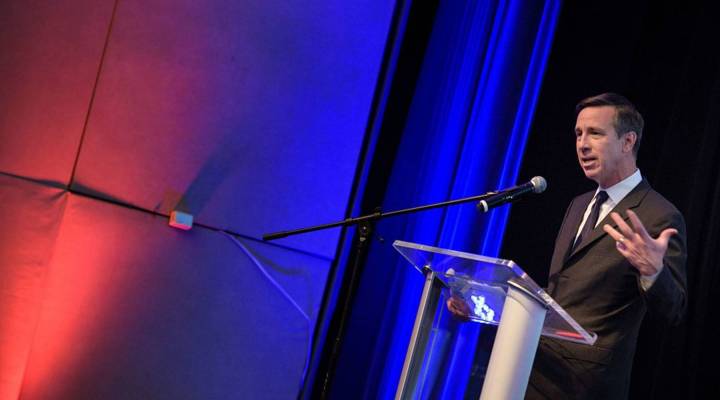 “We don't ever want to be the cheapest provider of lodging services,” says Arne Sorenson, president and CEO of Marriott International. BRENDAN SMIALOWSKI/AFP/Getty Images
Listen Now

With the purchase of Starwood Hotels last year, Marriott became the largest hotel company in the world. The CEO of Marriott, Arne Sorenson, has been outspoken about his political beliefs since the presidential election of 2016. Marketplace host Kai Ryssdal spoke with Sorenson for our series Conversations From the Corner Office about the future of the hotel industry and his outspokenness when it comes to politics. Below is an edited transcript of their conversation.

Kai Ryssdal: All right, full disclosure time. You know our CEO interview series Conversations from the Corner Office? Sometimes we take a little poetic license with the “corner office” part. Last week, with Satya Nadella up at Microsoft — he does have an actual corner office, but we talked in a conference room. This week, I’m going to let Arne Sorenson, the CEO of Marriott, set it up.

Arne Sorenson: Well, we’re at the Ritz-Carlton Central Park South, which is 59th and Sixth Avenue. It is a stunning little jewel and a great location obviously, right in the middle of Manhattan. And this time of year, there’s nothing like a run in the park to start the day.

Ryssdal: You get up run this morning?

Sorenson: I did not because I had a meeting at 7, so.

Ryssdal: To make you the biggest hotel company on the planet. Why did you need that deal?

Sorenson: Well, it was a number of factors came into it together. One, it was available. And that’s a pretty serious comment, because when you look at powerful platforms in our industry, they become available only maybe once every 10 or 20 years. It’s not as if these opportunities grow on trees. We believe in the competitive world we live in, which is changing very quickly, with technology companies that are trying to be active in our business.

Ryssdal: What I love is that you call Airbnb a technology company trying to be active in our business.

Sorenson: No, I’m thinking about a portfolio much bigger than just Airbnb. This is Expedia, Priceline, Google, Ctrip, Alibaba, all sorts of technology platforms which are not necessarily offering an alternative product, but they want to be in the middle of our relationship with our customers.

Ryssdal: To get to those technology companies trying to get in the middle of your relationship with your customer — who then is your threat? Are you not worried about Airbnb in 15 years and them changing the hotel business? Is it Google, I mean, I guess you can fight all of them, but you’ve got to prioritize.

Sorenson: Airbnb obviously will be a competitor forever. They’ve built a great platform. Very interesting, millions of listings. Nominally more rooms than we have in our system.

Sorenson: Our rooms, of course, are full just about every night. Their rooms are not even available every night. So the business model is quite different. And their product varies dramatically. I think that some of the product is really offered to be cheaper essentially, and we don’t ever want to be the cheapest provider of lodging services. We want to be a quality provider of lodging and services.

Ryssdal: Interesting thing to say you don’t want to be the cheapest part of lodging service.

Ryssdal: You are, apart from maybe tech CEOs, you’re more outspoken on some of the social and political issues of this day. You wrote to the president-elect after he was elected, congratulating him on his win and then saying, “Listen, you have an opportunity here to do some great things for this country.” But you were opposed to his candidacy. Why are you so outspoken?

Sorenson: The letter to the president I wrote election week, or right after the election. I wrote it first for myself. Now, it was a pretty emotional week for me. I had lost my mother a couple of days before. Then we get the election that hits, and I think, “OK, well this is not what any of us anticipated but accept reality. He’s won.” What would I realistically recommend that he do? And I think the next reason is for our people, and this is why I speak out most frequently. We have about 750,000 people who wear our name badge every day around the world. They are as diverse as any society. I was hearing instantly from many of our folks, “What does Trump’s election mean?” Maybe, from some communities, “I’m frightened by the election.” Now, I’m not sure I could say after almost a year that there’s been any influence from that letter. But nevertheless, I think many thousands of folks in our system said, “Arne we’re glad you wrote, because it gives us an insight into the way you think about it and the way you might try and use your influence going forward.”

Ryssdal: So that’s the moral case, I suppose. In a business sense, as a guy running the biggest hotel company in the world now, how worried are you about America’s reputation in the world? About our openness to international travel and international guests? And the willingness of other companies — in which you do a whole lot of business to participate in this economy.

Sorenson: It’s, it is concerning. We are constantly looking at data, particularly about international rivals to the United States. It looks like you’re seeing folks around the world say, you know, what, “I think I won’t go to the United States today.” Now, of course that’s not good for our business, and I can’t pretend to be unbiased. But even put aside our selfish interests, that costs us jobs in the United States, it costs us tax revenue in the United States, it costs us all sorts of things which are good for us selfishly. And so, I don’t argue with the notion that we’ve got to make sure we get security right and we get immigration right. But we can do those things and still communicate a welcome to the rest of the world, because 99 percent of the folks who want to come stay here present zero risk to us.

Ryssdal: You’ve been in this job five years, plus or minus. Let’s say you hang around for another 15. What does this industry look like when you’re done?

Sorenson: This industry is a spectacular one. Now, it will become increasingly global. It will increasingly wrap in experiences outside of the hotel, planning for the things you’re going to do when you go to various destinations. The technology will continue to become more and more intuitive and prevalent. All of us are wanting more experiences and less stuff. Not that we aren’t still interested in some stuff. We are. But we’re sharing on Instagram or Snap or whatever, travel and dining. It is the consumption that we are turned on by. And I think we’ll be there to grow with folks as they say, “OK, what are the parts of the world I want to see? What are the food and beverage experiences I want to have? What kind of design do I want to experience whether I’m in New York or in Shanghai? 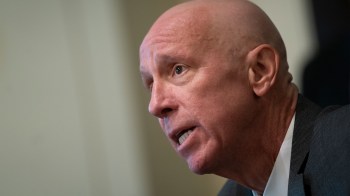