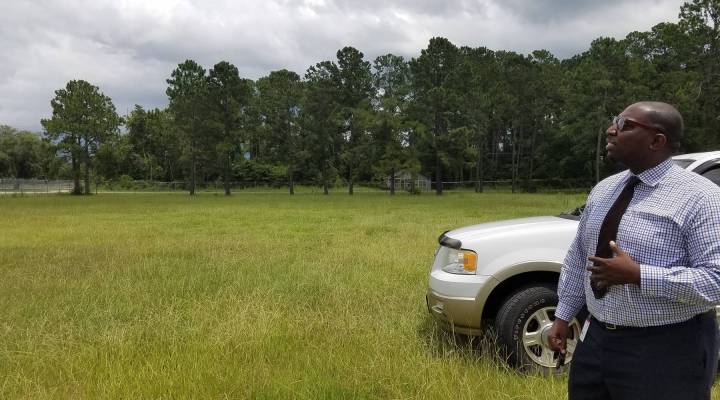 COPY
Travis Stegall looks at what he calls his “field of dreams,” where he plans to install solar panels to help subsidize energy costs for low-income residents of Brunswick, Georgia. Emily Jones/ for Marketplace

Travis Stegall looks at what he calls his “field of dreams,” where he plans to install solar panels to help subsidize energy costs for low-income residents of Brunswick, Georgia. Emily Jones/ for Marketplace
Listen Now

As solar technology gets cheaper, more and more people are installing it for their homes and businesses. But it remains too expensive for many people with lower incomes who could use the help on their power bills, like Gail Hutchinson.

She lives in a hundred-year-old house right on the outside edge of the historic district in Brunswick, Georgia. She fell in love with the place when she bought it 20 years ago. But old houses aren’t very energy efficient, and South Georgia is hot — which makes for a steep electric bill.

“Before I quit using the air conditioner — well I only use it on hot days,” Hutchinson said, “it was running about $250 a month.”

So she cut her monthly bill to about $80 by going without air conditioning in a city where it’s routinely at least 90 degrees through the summer.

A lot of people in Brunswick are sweating high energy bills; about 41 percent of people here live below the federal poverty line, which for this area is about $1,600 a month.

The city’s economic and community development director, Travis Stegall, thinks there’s help for many of them behind the city’s public works building.

“So we’re going to take that and turn it into a field of dreams,” he said with a laugh, looking out at a few empty acres growing weeds. He wasn’t thinking of a baseball field.

Stegall is part of a local team trying to tackle one question: How do you get solar energy to low- and moderate-income communities?

“The trick is, you have to pay for a lump sum up front, capital to basically buy the system, and there’s no further cost after that; sunshine is free,” he said. “But how do you get that lump sum up front in order to get those benefits long-term?”

Securing that funding is extra difficult if you don’t make much money, so putting solar panels on the roof is generally not an option.

The team in Brunswick got a little help when in June it won $15,000 in seed money from the Department of Energy, as part of the Solar in Your Community Challenge. And the project could qualify for more. Stegall plans to use the money to put up solar panels on that unused field and sell the power to the local utility, Georgia Power, for a rebate.

“We take those rebated funds, and now, with those funds, we subsidize the energy costs,” he explained.

The grant will only cover about a quarter of the cost of the panels, but Stegall hopes to keep the price down by bringing in more partners, like companies to provide and install the panels.

And he said even with the project still in the planning stages, it’s drawing businesses to town.

“There’s something about energy, when you are known to be energy-friendly, companies start to call,” Stegall said. “We’ve had five companies so far call.”

But it’s unclear whether other low-income cities can replicate this kind of project that requires upfront investment. So far, only a handful of communities and local utilities are giving it a try.