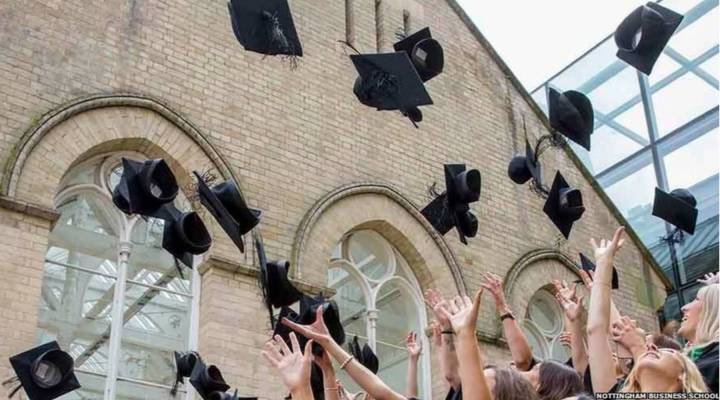 Mention Nottingham in a conversation, and it’s pretty likely the first thing to come to mind is Robin Hood.

But the story being told here is very different from the fable of old.

Instead of stealing from the rich to give to the poor, students today who hope to get rich are flocking to this charming city two hours north of London.

Nottingham Business School – which is part of Nottingham Trent University – has seen a 25 percent uptick in interest from international students.

That’s partially due to an unlikely source: Donald Trump.

While some Americans may have voted for the president partly because they valued his business acumen, an unlikely casualty of his immigration policies has been American business schools.

“One of the things we noticed post the election in the U.S. last November was a change in students’ expressed intent to study in the U.S.,” said Sangeet Chowfla, the president and CEO of the Graduate Management Admissions Council (GMAC).

The GMAC is the nonprofit that administers the GMAT, a standardized test most students take to get into business school. It published a survey of 1,000 global business schools this month, which found that international student interest in American business schools had declined by nearly two-thirds since the election.

Meanwhile, international student interest in programs in Canada, for example, has increased by nearly the same amount. The same goes for programs in continental Europe and the U.K.

While that trend has been happening for some time, Chowfla said he was surprised by the steep drop.

“We have been seeing some of this shift to continental Europe, the U.K. was always a strong study destination, Canada, Australia, Singapore, Hong Kong, increasingly places like India and China for a period of time but the magnitude of the change was exaggerated this year,” he said.

Part of the decline was due to student concerns about immigration policies – most notably, the ability to get an H1B visa after graduating.

The H1B is typically given to skilled immigrants, like computer programmers, and 85,000 visas are awarded each year via a lottery system. It is often used by companies in Silicon Valley to bring in tech talent – but it has also been used by outsourcing companies. Critics, including President Trump, have said those companies use the program to hire foreign workers instead of Americans – and he’s proposed reforming it. That’s scared international students, particularly those pursuing business degrees, who use the programs as stepping stones to better or more well-paid careers.

While the number of foreign business students in the U.S. may be declining, for many American students, business remains a global enterprise. Monica Kelly is one of those students. Though she hails from Seattle, Washington she’s spent most of her career in Los Angeles.

“I was in a position where I reached senior management level and I was looking for a way to expand my global opportunities,” she said.

She decided that in order to seize more global opportunities, she had to go abroad for business school. That’s how she found herself at Nottingham.

And she’s not alone.

At Nottingham, I spoke with two other students from India, and the program boasts a class made up of people from 104 countries. Almost all of them said business was an increasingly global endeavor. Because of that, they fretted they wouldn’t be able to get international experience in the U.S., a country they feel has increasingly turned inwards.

That they’re attracted to a business school in the U.K., however, is not an accident.

“In the U.K., we have gone through a period where the MBA suffered quite a bit,” said Baback Yazdani, the dean of Nottingham Business School.

That was partially due to visa restrictions that were put in place five years ago which limited the ability for graduate students to get post-study work visas.

Since then, Nottingham has worked hard to build its program around “experiential learning” – as well as internships that can help students to find companies that might sponsor them for visas or that might be able to hire them in other parts of the world. Businesses close to Nottingham include Boots, which has merged with the pharmacy chain Walgreens in the U.S.

“Overall the MBAs are a saturated market – and it’s a global market. There are very sophisticated consumers for this market. So they know what they want and they know it’s everywhere. So they are looking for differentiators and value,” Yazdani adds.

Today, there are over 5,000 students in its various business degree programs.

“My guess is that’s probably happening now in the states and that the universities [there] will be going through the same trajectories,” said Nottingham Business School lecturer Phil Considine.

“We’re kind of five years ahead of them.”

In Nottingham’s atrium, banners are strung from the rafters welcoming international students – who start classes today.

Walking to the second floor, you can look out across all of the East Midlands, including the beginning of Sherwood Forest – which might be a lesson for U.S. business schools that could be distracted by the trees.