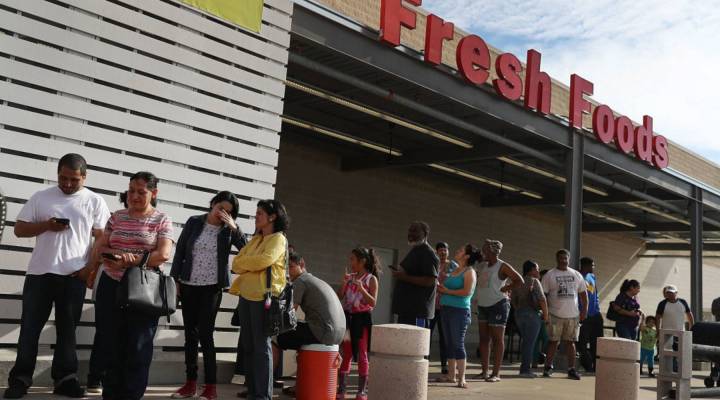 COPY
People in Beaumont, Texas, wait in line in hopes of buying water after the city's water supply was shut down after Hurricane Harvey passed through on Aug. 31. Joe Raedle/Getty Images
Weather Economy

People in Beaumont, Texas, wait in line in hopes of buying water after the city's water supply was shut down after Hurricane Harvey passed through on Aug. 31. Joe Raedle/Getty Images
Listen Now

The economy grew at a 3.1 percent annual rate in the second quarter of 2017, according to the final gross domestic product estimate released by the U.S. Bureau of Economic Analysis. That compares to first-quarter GDP growth of 1.2 percent.

The effect of hurricanes Harvey and Irma on GDP will begin to show up in the third quarter (preliminary estimate scheduled for release Oct. 27).

Signs of Harvey and Irma have already started to show up in monthly economic data with slowdowns in industrial production, consumer spending, consumer sentiment and home sales in August. First-time claims for unemployment benefits have risen because people in storm-damaged areas of Florida and the Texas-Louisiana Gulf Coast couldn’t get to work and workplaces shut down temporarily. (Economic reverberations from Hurricane Maria, which devastated Puerto Rico and the U.S. Virgin Islands in mid-September, have not yet surfaced in the monthly economic data and are most likely to be seen in fourth-quarter GDP.)

Mark Zandi, chief economist at Moody’s Analytics, estimates that the disruption to businesses, households, public services and infrastructure from Harvey and Irma will shave 0.6 percent from gross domestic product in the third quarter, which ends September 30.

Zandi predicts GDP growth of 2.4 percent (annualized) in the third quarter, rather than the 3 percent rate that was expected before the storms hit. But he said that by the fourth quarter, storm-related disruptions will likely be offset by federal aid and insurance payments flowing to the Gulf Coast and Southeast.

“Most of the rebuilding and the add to growth will be in the first half of 2018,” he said.

“That’s damage to the housing stock, commercial real estate, vehicles and other furnishings, public infrastructure,” said Zandi, “and also lost economic output,” including lost sales, wages, factory production and other economic activity that was suppressed by the storms.

Zandi explained that while the GDP figures released in coming months will take into account that lost economic output, they won’t include the multibillion-dollar cost of damaged and destroyed property and infrastructure.

“It’s not intuitive,” Zandi said, “but no, that’s not what GDP measures. GDP measures the value of all the things that we produce. This is a hit to what we’ve already produced.”

The billions of dollars in federal disaster relief and insurance money that flow into the region for repairs and rebuilding in coming quarters will register as more production of goods and services, boosting GDP.

“You often hear people talk about how disasters are actually providing a benefit because of all the reconstruction,” said Carolyn Kousky, director of policy research at the Wharton School’s Risk Management and Decision Processes Center. “This idea goes back to the 1800s — it’s referred to as the ‘broken window fallacy.’”

“He talked about a shop owner whose window got broken,” explained Kousky, “and an onlooker said: ‘Oh, this is actually going to be better for our economy, because now the person who fixes windows is going to be employed and pay the person who makes glass for the window.”

The fallacy in that thinking, Kousky said, is that “destruction of capital should not be a benefit. If the shop owner didn’t have to repair the window, he could have used that money for other things.”

In the current post-disaster context, she said that as government and private investment flow into the affected region for rebuilding, “there will be increases in certain types of expenditures, and you’ll see that as upticks in some macroeconomic indicators. But it masks the fact that the money homeowners and businesses are spending would have been spent on other things instead. Firms would have invested in technological improvements, if they made economic sense, before the disaster.” Homeowners would have spent their savings and income on home improvements or a new home, she said, rather than hotel rooms, storm repairs, new appliances and the like.

“You could argue, and I think it’s reasonable,” said Zandi, “that GDP doesn’t measure the loss of welfare to people, the real economic damage. But it is what it is.”

Critics of the way GDP is calculated (for instance, Social Progress Imperative) are pushing new measures of economic well-being to take into account the range of damages brought about by natural disasters, such as lost wealth, homes, financial security and peace of mind. But those effects won’t be reflected in the GDP growth rates generated by hurricanes Harvey and Irma in the near future.