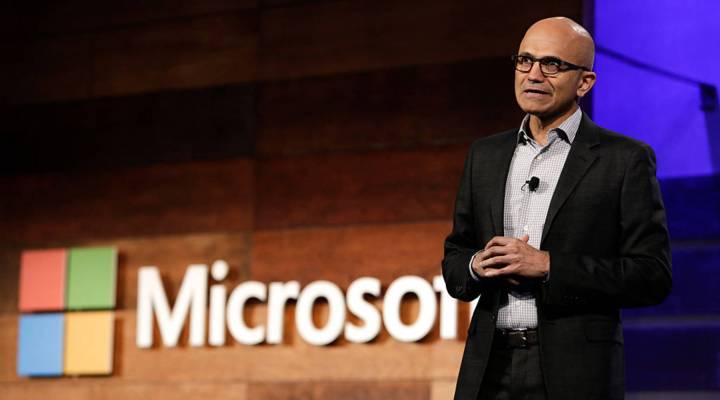 When Satya Nadella took over from Steve Ballmer as Microsoft’s CEO, he became the top man at a company with plenty of problems. Microsoft was a legacy tech company that had missed out on one of the most important technological developments since the desktop PC — the mobile phone. The company had internal culture problems that stopped it from being innovative. And Microsoft just wasn’t cool when compared to its competitors. Nadella was tasked with turning the company around and bringing Microsoft into the future. Two years into the job it seems like he’s well on his way. It’s a process he details in his new book, “Hit Refresh: The Quest to Rediscover Microsoft’s Soul and Imagine a Better Future for Everyone.”

Nadella talked to host Kai Ryssdal about why immigration policy is so important to the company and why tax reform is a close second. An edited transcript of part one of their conversation follows.

Kai Ryssdal: You have been described, I think it was Fortune magazine, as a skinny, contemplative, questioning the world kind of guy. You write about the poetry of code and cricket in this book. How did you get this job running this company?

Satya Nadella: Look, I mean, for me the only company that I’ve really known is Microsoft. I have spent 25 years of my life at this company, I’m one of those consummate insiders, and, you know, you’ll have to ask someone else as to how I got this job. But the thing that I feel is that innate sense of purpose of why am I here and why this company’s here and the connection between the two.

Ryssdal: All right. So, let me take a second and dig into my bag here and pull out a copy of the book, right? Since fundamentally that’s why we’re here. “Hit Refresh” is the title, but the subtitle is “The Quest to Rediscover Microsoft’s Soul.” Kind of implies this company lost its soul.

Nadella: The entire metaphor of hit refresh, the browser has this beautiful logic when you hit refresh on your browser. It doesn’t replace everything. It replaces only those pixels that need to be replaced. And I think that is what I wanted to capture. You know, any company that has been successful and needs to continue to drive that success will have to drive transformation. But you have to be smart.

Ryssdal: One of the things you’re trying to do in this book is talk about your views on corporate culture. You’re very, very focused on that in this book, and you say, “You know, people always ask me how you doing getting Microsoft’s corporate culture changed?” And you say, and these are your words, “I give them what I think is a very Eastern answer. You know, we’re doing fine, but we’re not quite there yet because maybe we’ll never be there.” Which gets me to this, I suppose, kind of Eastern question: Where do you find your brain space?

Ryssdal: Take all the time you want.

Nadella: I think the thing that I have found inspiration in is the ability to reflect, perhaps, on my fallibilities. That’s, I think, what I somehow, or with a lot of trial and error, have stumbled into. So I’m most effective when I can start recognizing the mistakes I make. And that’s what gives me the impetus to be able to push and change.

Ryssdal: What’s the last semi-significant mistake you made?

Nadella: I would say the realization that in many cases, customers have already chosen to work with you and yet you consciously, or unconsciously, abandon them to go work off on the new shiny object is a mistake I’ve made recently and in the past. And every time I made the mistake, the good part was I’ve been able to recognize it fast enough. It’s tempting in tech to sometimes move on to the next thing. Except we all need to work to help others move with us. And, that’s, I think, what makes Microsoft unique in that sense, and it’s something that at least me, as a CEO of Microsoft, got to get right.

Ryssdal: Let me run through a couple of things that are of import now in public policy that I know Microsoft has a position on and I need to get your thoughts about. First, of course, is immigration and [Deferred Action for Childhood Arrivals]. You are an immigrant. You have dealt with the intricacies of the American immigration system; you know it probably better than most CEOs. You run a global company. I’m sure there are “Dreamers” within 100 yards of where we’re sitting. Are you concerned about the current state of American immigration? The debate over immigration in this country right now?

Nadella: You know, first I’ll admit it’s a complex topic. But that said, I am definitely gung-ho about our ability as America to work this out in a way that we can get to an immigration policy that is enlightened, that is in line with our own long-term competitive interests. But we have to do work. The Congress has to do work, we in companies will have to do our work. But absolutely I believe immigration is what makes us stronger, more competitive and let’s stick with it.

Ryssdal: Tax reform is item No. 2 or 3 in Congress depending on what day it is. Specifically, a substantial cut in the corporate tax rate. How important is that for you and for this company?

Nadella: It’s No. 2 after immigration. You know, for me, tax reform I think needs to think through what is it that we want to do in the U.S. so that we can create more of an incentive for people to invest? Quite honestly as Microsoft, that’s not my No. 1 issue. I am investing in the United States. I am, you know, we pay taxes here, we pay taxes elsewhere. If anything, what my interest would be, some global tax regime that has some equilibrium. Because, I think the stability for a multinational company like ours to be able to do business world over where we are paying taxes, we are contributing locally in every country and we’re able to invest is what’s most important.