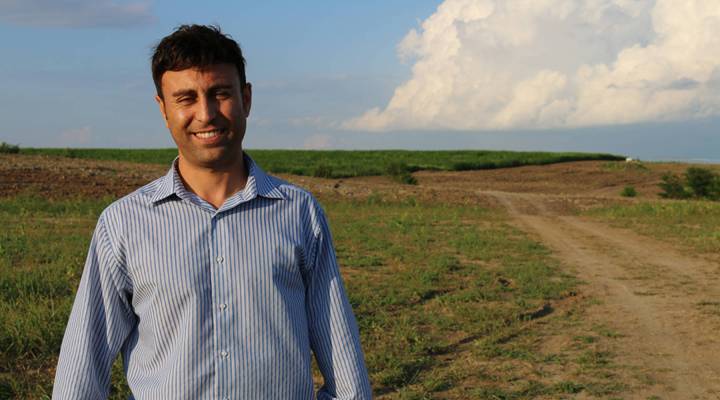 COPY
Khaled Hesso and his family were among the first Yazidis to move to Lincoln, Nebraska. Daisy Palacios/Marketplace

Khaled Hesso and his family were among the first Yazidis to move to Lincoln, Nebraska. Daisy Palacios/Marketplace
Listen Now

This is part three in our series on Nebraska’s immigrant labor and how that workforce has helped shape the state’s economy. Read part one and part two.

The Trump administration plans to dramatically lower the cap on refugees entering the United States next year to 45,000.

One state that’s watching closely: Nebraska. Last year, the state resettled more refugees per capita than any state in the country. In Lincoln, the state capital, people will be watching the numbers, too, especially the city’s Yazidi community. Yazidis are a tiny religious minority largely from northern Iraq. Over the years, the Yazidi community in Lincoln has grown to about 3,000 people, making it the largest in the United States.

This year, a group of Yazidis in Lincoln banded together to build the first national cemetery for the community. The 20-acre lot is still mostly weeds and dirt, with just a few grave sites.

“When they saw a lot of their cemeteries getting demolished back home by ISIS, everybody [was] desperate to establish a Yazidi cemetery, for just Yazidis,” said Khalaf Hesso, who helped buy the land.

Yazidis are a small group — fewer than a million worldwide. For centuries they’ve faced persecution for their faith, which pulls elements from different religions. Since 2014, ISIS captured and killed thousands of Yazidis in what the United Nations has described as genocide.

A decade later, Lincoln started resettling Yazidis in large numbers, many of them translators for the U.S. army. Over the years, more refugees have been drawn to the city for its affordable rents and safe neighborhoods.

“Most of them, including me, see Nebraska as, you know, their town that they’re going to be at for the rest of their life,” said Hesso, who’s a Cornhuskers fan and works as a Kurdish and Arabic interpreter.

He said that many Yazidis, when they first arrive, have to take low-wage jobs at places like McDonald’s and Walmart. But as they settle into the community, many of them start their own businesses.

Off a main road in Lincoln, along a strip of immigrant-owned businesses, is a bakery called Turkish Sweets. Inside, there are just a few tables, but the glass cases are full of baklava, cookies and cakes.

Quadi, who’s just 20 years old, learned how to bake while he was a refugee in Turkey.

Safwan Quadi, 20, owns Turkish Sweets in Lincoln, Nebraska. He is one of many Yazidis who have opened up their own businesses in the area.

Before opening his shop, he spent his first two years in the U.S. saving money, working at a factory and washing dishes at a buffet restaurant. The worst parts of those jobs, he said, was dealing with bosses.

“In the United States, oh my God, it’s like supervisor, team leader … I want to work like, only me,” he said.

Hasan Khalil gets that. Three years ago, he opened the Golden Scissor Barber Shop & Salon in Lincoln.

Inside his shop, he was giving a nervous kindergarten boy a haircut. Khalil’s own hair was hidden under a Yankees cap. As a teen, he grew up in New York, where he was resettled from Syria.

He moved to Lincoln when he was 25 years old after missing the friends he’d grown up with in refugee camps.

“Just coming over here and seeing the corn farms, kind of reminded me a little bit of back home, a lot of open space,” Khalil said.

Lincoln’s big Yazidi community feels like home in other ways, too. In between the buzz cuts and fades, you can find Khalil in the corner of his shop, practicing traditional Yazidi songs on his keyboard.

It’s a way to make extra money, but also “music is like my passion,” Khalil said. “Ever since I can remember, my dad played the Kurdish long neck guitar and he sings. My daughter is getting into it.”

He said the music is a way for Yazidis to celebrate who they are, to reconnect with their past in a land where they’re putting down new roots.