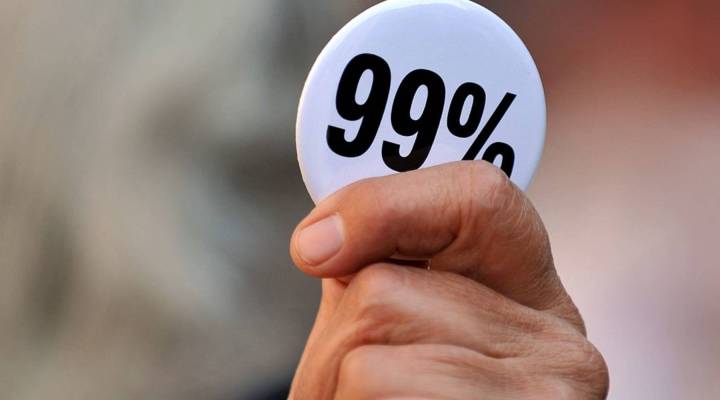 COPY
A person holds a 99 Percent button at the Occupy Wall Street protest September 17, 2012 on the one year anniversary of the movement in New York. Stan Honda/AFP/GettyImages

A person holds a 99 Percent button at the Occupy Wall Street protest September 17, 2012 on the one year anniversary of the movement in New York. Stan Honda/AFP/GettyImages
Listen Now

That’s the type of future that Muhammad Yunus, winner of a Nobel Peace Prize, envisions in his new book, “A World of Three Zeroes.”

With the wealth gap increasing, Yunus argues there are flaws in our current economic system. He joined us to talk about capitalism, the importance of entrepreneurship, and the microlending system he developed. Below is an edited transcript.

Muhammad Yunus: Human beings are selfish — as well as selfless. The selfless part has never been used in economics, in the business world. I’m saying that’s what’s creating all the problems that we created. Wealth concentration is becoming faster and faster, and 1 percent of the population of the world owns more than 99 percent of the wealth of the world. I say this is a ticking time bomb. It will explode anytime.

Brancaccio: So if you can figure out a way for us to find within ourselves our more selfless inclinations, and reorder the economic system to take account of that, you think a lot of these huge problems start to dissipate?

Yunus: Yes, indeed. So at the same time, I’m raising another question: the interpretation of what economic theory has been saying. That most of us are born to work for somebody else, so it’s a job-driven economy. I say this is the wrong direction completely. Human beings are not born to work for somebody else. Human beings are basically entrepreneurs.

Brancaccio: Entrepreneurs who solve a problem by starting a business?

Yunus: Yes. As an entrepreneur, you have choices. Choices to make money for yourself, choices to solve the problems of the world in creating businesses called social business.

Brancaccio: You became concerned about the children whose parents had benefited from your microlending system, the Grameen Bank. You wondered why the kids the next generation weren’t doing better.

Yunus: The strange thing that happens is that as they come out of the schools, come out of the colleges, they’re all lining up for jobs and there are not many jobs in Bangladesh. So they get really frustrated. Then I keep telling them, “Forget about jobs.” The right idea is something that you should be telling yourself, that “I’m not a job seeker, I am a job creator.” And I give the example, “Look at your mother. She joined Grameen Bank some 20 years back, took a small loan, a $40 loan, and started a business. If your illiterate, your mother could become an entrepreneur.” There’s no reason to believe that everybody will be just lining up for the jobs. And the jobs are not coming anyway. All these jobs that we are looking for will not exist anymore because artificial intelligence will take it over.