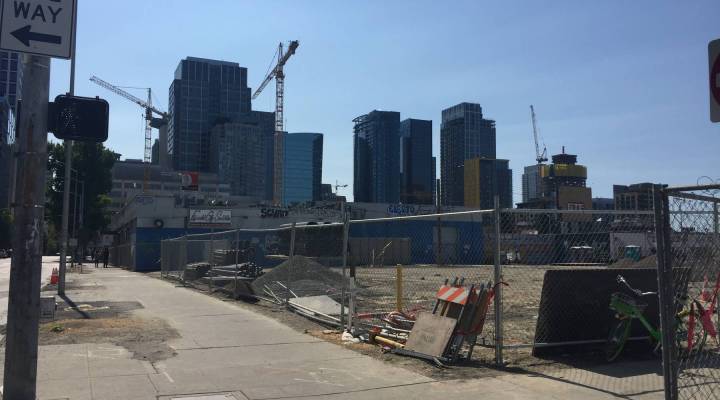 COPY
A construction site with cranes in the background in downtown Seattle. Anna Boiko-Weyrauch/ for Marketplace

A construction site with cranes in the background in downtown Seattle. Anna Boiko-Weyrauch/ for Marketplace
Listen Now

These days, many buildings in Seattle are like crabs, molting their old shells and growing bigger. The soundtrack of demolition is everywhere: heavy machinery and falling rubble.

The big theme in Seattle is growth. The city’s population is swelling and construction is booming. The city is trying to harness this growth to make housing more affordable in the long run and ensure middle- and low-income people can still afford to live in town, even as it grows. The plan, called the Housing Affordability and Livability Agenda, relies on an exchange between the city and private developers known as the “grand bargain.”

Developers get to build taller buildings in return for building affordable housing, or contributing to a special fund for the city to build it instead. In pricey Seattle, the city considers affordable rent for a two bedroom to be around $1,300 a month.

The goal is to increase the city’s capacity to house residents by creating more places for people to live, said HALA Citywide Project Manager Sara Maxana.

For that to happen, Seattle is changing its land use codes in about two dozen neighborhoods. It’s rezoning 10 percent of the city to allow for more housing density.

But while there is broad agreement that more housing is needed, residents from across the city are worried the rezoning plans and increased density in some areas will obliterate their neighborhoods’ unique character. Recently, the city council voted to rezone the Chinatown-International District, which includes Little Saigon, where Minh Duc Nguyen heads community group Helping Link.

The neighborhood is close to downtown, with attractive real estate.

“There are a lot of investors that have money, but that’s going to push all these mom and pop restaurants out of the area,” Nguyen said. “So I don’t know if we’re going to be able to retain Little Saigon.”

The building where her group runs computer and ESL classes is also going to be demolished and redeveloped.

In all, the city expects the plan to generate 6,000 new affordable units over ten years.