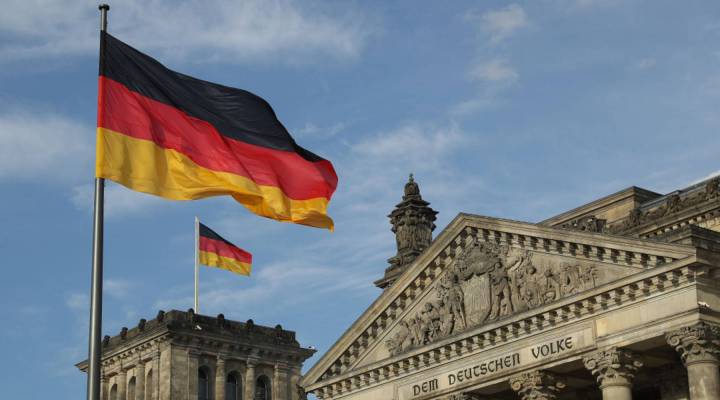 COPY
German flags fly over the Reichstag, seat of the Bundestag, on Sept. 4 in Berlin, Germany. Sean Gallup/Getty Images

German flags fly over the Reichstag, seat of the Bundestag, on Sept. 4 in Berlin, Germany. Sean Gallup/Getty Images
Listen Now

Germans have traditionally been famously relaxed about the global dominance of the English language – unlike, say, the French.

But mass immigration to Germany and increasing globalization may be starting to change attitudes. Some Germans complain their language and culture are losing ground — even within Germany itself. And several politicians are now calling for a crackdown on the increasing use of English in German daily life. One said: “It drives me up the wall the way waiters speak only English in Berlin restaurants. ”

A cozy eatery called Les Papilles in the Neukolln district of the capital city has been identified as one of the many “offending” establishments. Patricia, the head waitress who presides over the snug, popular, little café, is Polish. She admits that she doesn’t speak much German and prefers to use English at work.

“Yeah, yeah definitely.  It’s hard to learn German. It’s really hard. Especially in this neighborhood, where there are a lot of newcomers. If you walk through the streets, you only hear English most of the time,” she said.

All her colleagues at the café are non-German and prefer to speak English, including the boss, an amiable Frenchman, Steven Juquin, who arrived here from Paris three years ago.

“We’d all be happy to speak German but unfortunately at school we all learned English not German. Actually, my English is not the best but my English is quite a bit better than my German, for sure.” Juquin said.

German Chancellor Angela Merkel’s government made it mandatory for the one million asylum seekers, that she let into the country, to learn German. But under European Union freedom of movement rules, no such requirement can be applied to the hundreds of thousands of citizens from poorer EU countries who’ve flocked here for work. Patricia, from Poland, is relieved about that.

“It’s a nice opportunity to work in a place like this and being surrounded by Germans who …. are able to speak English,” she laughs.

Not all her customers are laughing, however.  Even some cosmopolitan Berliners, who are completely fluent in English and very comfortable with the international flavor of the city, are getting a little ticked off.

Dominik Drutschmann, a writer who lives nearby, walked out of the café recently after his girlfriend, who doesn’t speak English very well, found that none of the staff was able to take her order in German.

“It shouldn’t be that the people living here, who are born in Berlin or whatever, that they are not able to order something in a café, in the street, in their neighborhood,  in their own language. It’s not so good, to be honest,” Drutschmann said, adding that the French wouldn’t put up with this.  Nor, he added, would the Brits or the Americans.

“Turn it around. Think about this in London or New York.  Two people from Germany opening a bar and they only speak German. It’s just a bit weird,” he said.

There are many bars and restaurants in central Berlin where German seems almost verboten; staff have a limited grasp of the national language and daily specials are frequently advertised in English. With a general election underway it’s becoming a political issue.

“We must deal with this problem.”  Leif Erik Holm of the nationalist and anti-immigration Alternative for Deutschland party told Marketplace.

“We must protect our own culture and language. Older people, especially, should be able to order their coffee in German.” he said (in German, of course).

Brexit is further fueling the backlash. Three senior German lawmakers are calling for an end to the dominance of English as the working language of the EU after Britain leaves the bloc and they would like German to be promoted instead. But even Drutschmann feels that is going too far.

“That sounds a bit childish to be honest. It sounds as if they are trying to punish Britain,” he said “But this isn’t just about the U.K. English is the international language.  You can go to Prague, you can go to Budapest, go to any place, you’ll hear English now.”

Anyway, he says, English is the world’s lingua franca today largely because of America not Britain.  Nevertheless, he would like to hear a bit more German — in Germany.