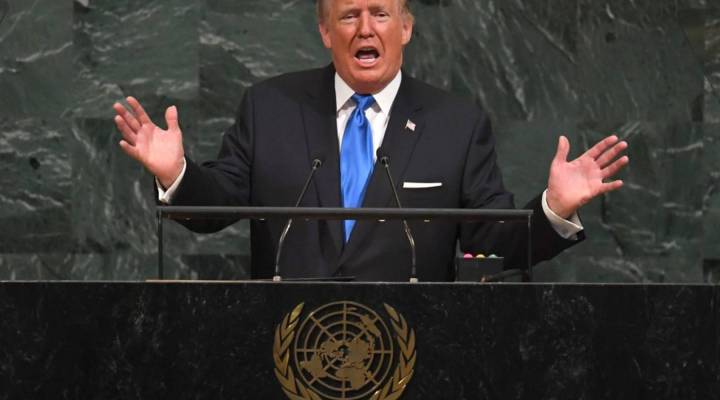 NEW YORK (AP) — President Donald Trump signed an executive order Thursday aiming to tighten an economic noose around North Korea, days after he threatened to “totally destroy” the country if forced to defend the United States or its allies.

The new order enables the U.S. to sanction individual companies and institutions that finance trade with North Korea. It adds to U.S.-led international pressure against Kim Jong Un’s expanded missile and nuclear testing program that has stoked fears of nuclear war and dominated the president’s debut at this week’s U.N. General Assembly.

The announcement came as Trump met in New York with leaders from close U.S. allies South Korea and Japan, the nations most imperiled by North Korea’s threats.

Trump said the order would also disrupt other trade avenues for North Korea in an effort to halt its nuclear weapons program. The president said “tolerance for this disgraceful practice must end now.”

He also saluted China’s central bank for what he said was a move to stop its banks from trading with North Korea. That development was reported by Reuters Thursday. China is North Korea’s main trading partner and conduit for international transactions. Washington has been pushing China to scale back economic and financial ties to further isolate Pyongyang.

Trump, in his Tuesday address to the U.N., said it was “far past time” for the world to confront Kim, declaring that the North Korean leader’s pursuit of nuclear weapons poses a threat to “the entire world with an unthinkable loss of human life.”

“Rocket Man is on a suicide mission for himself and his regime,” Trump said, mocking the North Korean leader even as he sketched out potentially cataclysmic consequences. The president spoke of his own nation’s “patience,” but said that if “forced to defend itself or its allies, we will have no choice but to totally destroy North Korea.”

Asked for clarification Thursday on what circumstances might qualify, Trump’s national security adviser, H.R. McMaster, told NBC that would be if North Korea attacked the U.S. or its allies.

Vice President Mike Pence told Fox News Channel on Thursday: “We do not desire a military conflict. But the president has made it very clear, as he did at the U.N. this week, that all options are on the table and we are simply not going to tolerate a rogue regime in Pyongyang obtaining usable nuclear weapons that could be mounted on a ballistic missile and threaten the people of the United States or our allies.”

The president was meeting with and having lunch Thursday with Japanese Prime Minister Shinzo Abe and South Korean President Moon Jae-in, seeking to show a common front in facing the North Korean threat despite marked differences in outlook.

Speaking at the U.N. Thursday, Moon took a less confrontational stance than Trump and Abe in their addresses to the world body. Moon urged North Korea to abandon its nuclear weapons and seek dialogue. He said the standoff needed to be “managed stably.”

Still, when he sat down later with Trump, he complimented the president’s “very strong” U.N. address, saying it would “help to change North Korea.”

Trump’s overheated language was rare for a U.S. president at the rostrum of the United Nations, but the speech was textbook Trump, dividing the globe into friends and foes and taking unflinching aim at America’s enemies. It drew a sharp rebuke from the North’s Foreign Minister Ri Yong Ho, who said “It would be a dog’s dream if he intended to scare us with the sound of a dog barking.”

Despite Trump’s rhetoric, his administration insists it is seeking a diplomatic resolution. Any military intervention designed to eliminate the North’s nuclear and missile arsenal would almost surely entail dire risks for U.S. allies in the region, particularly South Korea, lying in range of the North’s vast stockpiles of weaponry.

Fears of a military confrontation are increasing. North Korea conducted a series of provocative launches in recent months, including a pair of intercontinental missiles believed capable of striking the continental United States and another pair that soared over Japanese territory. It also exploded its most powerful nuclear bomb to date. Prodded by Washington, the U.N. has responded with the toughest economic sanctions on North Korea yet.

Still, the impasse is no closer to being resolved. Russia and China, which backed the new sanctions, want the U.S. to seek dialogue with the North. American officials say the time isn’t right for any formal diplomatic process.

But other than using economic pressure to try to compel Pyongyang to give away its nuclear weapons — a strategy that has failed for the past decade — Trump’s administration has yet to lay out a strategy for a possible negotiated settlement. In recent weeks, the administration’s lack of direction has been all too apparent, as Trump and other top officials have vacillated between bellicose talk of possible military action and, at one point, even praise for Kim for a brief lull in missile tests.