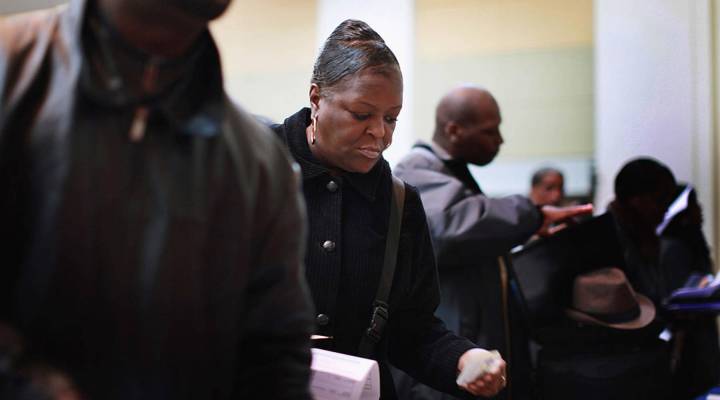 COPY
Job seekers get information about city jobs during a job fair hosted by the city of Chicago, Illinois.  Scott Olson/Getty Images

Job seekers get information about city jobs during a job fair hosted by the city of Chicago, Illinois.  Scott Olson/Getty Images
Listen Now

There’s a new study out from researchers at Yale University, which says that Americans — white Americans mostly — underestimate the economic inequality between white and black Americans.

Kai Ryssdal: What in a nutshell did this Yale study find?

Tracy Jan: The researchers found that Americans — especially wealthy white Americans — greatly over estimate how much progress the country has made towards racial economic equality. Basically people think that black Americans are making a lot more, have accumulated a lot more household wealth than they actually have.

Ryssdal: We should say here that there were census data out like last week, you point out in this piece, showing that African-Americans are the only racial group still making less than they did in the year 2000.

Jan: That’s correct. And for every $100 of wealth that a white family has accumulated a black family has only five dollars and a few cents. And the same gap has existed for 50 years.

Ryssdal: How clueless are we? And I get that that’s a rough way to put it, but how delusional are we?

Jan: We are delusional. And they studied white and black Americans at the bottom and upper end of the income spectrum so people making below $40,000 as well as above $100,000 and across the board everyone is clueless. But the most delusional are the wealthy white people and there are different reasons for this. They mostly point to psychological and structural reasons. Psychological being that Americans who most buy into this ideology that our country has about being a meritocracy, that society is fair and equal — those are the people who are most likely to over estimate how much progress has been made.

Ryssdal: What’s the rationale for doing this study? Why do we need to know this, other than to know ourselves I suppose?

Jan: That’s a really good point. I mean broadly speaking you can’t fix a problem that you don’t know you have. And since the data shows there are huge racial gaps in economic equity, it’s a huge problem. But because people don’t see it and they don’t think about it, policymakers are not viewing policy through correcting that inequality.

Ryssdal: It’s worth mentioning — and one of the researchers you talk to points this out— race-based economic inequality is the founding economic principle of this country.

Ryssdal: And so here we are 240-something years later still trying to figure it out.

Jan: Right. So one quote that you know one of the researchers had that I loved was she was talking about, you know, growing up and hearing this story about an America that basically is like “Oh there was slavery that was fixed. M.L.K. marched, Martin Luther King marched. That was fixed. And then we had Obama as president. So all is good.