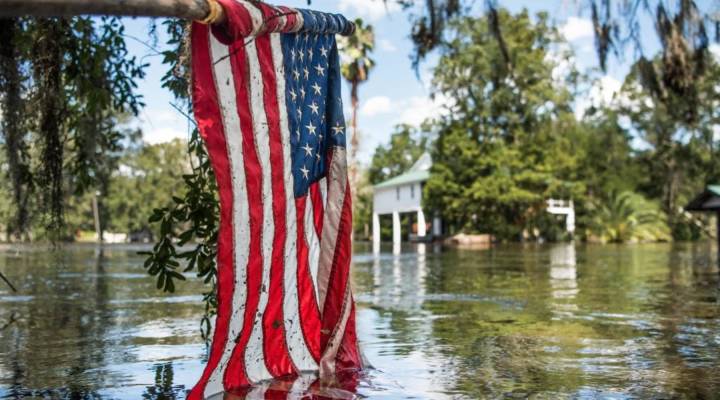 Floodwaters from Hurricane Irma recede September 13, 2017 in Middleburg, Florida. Flooding in town from the Black Creek topped the previous high water mark by about seven feet and water entered the second story of many homes.  Sean Rayford/Getty Images
Listen Now

It’s no secret that recovering from disaster takes a lot of time and a lot of money. The federal government said Hurricane Katrina cost about $160 billion in damages, and for Harvey, experts predict somewhere between $150 to $180 billion. But what about rebuilding? And what about preparing for the next disaster?

There’s a saying in the disaster relief community: $1 of disaster prevention saves about $4 on cleanup and recovery. The problem is, the way we go about disaster relief doesn’t always reflect this adage.

“Our current paradigm is based on our historical experience with disasters,” said Alice Hill, a senior research fellow with the Hoover Institution. “Unfortunately, because of increased population, development along our coast, we’re seeing far greater cost in our disaster recovery.”

Previously, Hill was with the Department of Homeland Security and served on President Obama’s National Security Council, where she advised on disaster mitigation. Marketplace Weekend host Lizzie O’Leary spoke with Hill about the ways we might better spend our money after disasters. The following is an edited transcript of their conversation.

Lizzie O’Leary: Right now, we spend much less on preparation than we do on, you know, response and recovery. How how would we realign those priorities?

Alice Hill: Well, that’s the challenge. Because as you’ve alluded to, when we have a bad event, it’s very emotional for all of us. Of course, we want to help our fellow citizens, and we want to make sure everyone’s safe. The problem is that we end up rewarding communities, in some instances, for not taking the necessary precautions in advance. For example, by having stricter building codes, limits on development in floodplains. Those kinds of steps can help reduce the damage from future disasters. It doesn’t prevent the extreme weather, but it just makes us more resilient to those impacts.

O’Leary: How do we think about who pays for all of this? I mean, right now, you know FEMA gives out some disaster preparedness grants, but those pale in comparison to emergency relief funding. But, you know, does that mean that rich homeowners are going to be better prepared for some sort of scary event than someone who’s less well off?

Hill: Absolutely, our most vulnerable communities are the ones that feel these impacts often the greatest. They’re living in housing that may not have the kind of resilient measures that a more expensive home would have. But if we require it in our building codes, that should ensure that there’s a base level of resiliency. The question as to who pays after these disasters is what I guess used to be the $64,000 question, and now is probably the $64 billion or more question. The issue is, if a community decides not to have strong building codes, and they are hit with accelerating events, which we are seeing as a result of a warming climate, then the question becomes: who pays for that decision, if the house doesn’t withstand it? Right now, our paradigm is that if the event is truly catastrophic, the federal taxpayers pay. It’s been argued that perhaps we need a new paradigm that would require, essentially, that any community that takes money in the face of these very challenging circumstances, builds back better for the future.

O’Leary: What would you change in the rules that that dictate how we prepare for disasters and how we spend money at the federal level?

Hill: One of the clear things that we can do going forward is commit as a nation that we are going to rebuild better so that we are prepared for the events that the science tells us will reasonably occur in the foreseeable future. Our typical infrastructure could last a hundred years. Right here in Washington D.C., we have drainage pipes that date from the civil war. I have to say kudos to those civil engineers that they’re still in operation, but as we replace those over time, we need to be mindful that here in Washington D.C., we will see increased precipitation as a result of warming temperatures, and we need to build those bigger. And also plan that they might be in use a hundred years, and that would be a good use of our money if they were.

O’Leary: If I want to spin this out to sort of its most extreme conclusion, does that mean then that, let’s say I want to build a house on the coast in Georgia or Louisiana, can the government say, “No, you can’t do that, it’s just too dangerous?”

Hill: I’m not proposing that we get involved in individual zoning decisions. The zoning decisions are made on the local level. That is not typically a federal matter. What I am suggesting is, if you take federal money to build that house, or you want a subsidy to purchase federal insurance, which is often what happens or frequently happens in the United States, you need to build resiliently. And if you’ve taken taxpayer money to make that choice, I think the taxpayers can demand that that investment be resilient.

O’Leary: Why do we keep doing the same thing over and over again when the costs are so clearly piling up?

Hill: We have a huge range of challenges here. The incentives aren’t completely aligned. Homebuilders will tell you that their interest is providing homes as cheaply as possible to increase home ownership. Of course, if you want to do that, you will find that it’s cheaper to build if you don’t build to a higher standard or stricter building code. It may be a modest increase to accomplish that, but even a simple nail that costs about $15 per roof, homebuilders have opposed that in high wind areas just simply for that cost. So we see that their incentives are misaligned.

O’Leary: I mean, do they have an argument? You know, in Florida some of the homebuilders are saying, well, but that’s going to hurt the affordable housing stock.

Hill:  You know, in ancient times, the first building code, they said basically it was penalty of death if the house failed, for the homebuilder. Certainly we don’t want that. But we have to find a way to say, we need to insist on higher standards to protect those who are going to have to help in recovery. We have done a really remarkable job in protecting life through building codes, and that is something that we should applaud. As tragic as it is to see any loss of life in any of these events, that is greatly reduced from what you would expect. But what we are seeing is greater increases in the cost of damages, both in disruption costs in terms of businesses, it’s slower for them to get back up, as well as just the cost of repair and restoring. So the the issue is, who’s going to pay? And that, I think, is the fundamental question that all of us need to be fully engaged upon as we talk about what recovery looks like for these types of events.

To listen to the full segment, use the blue media player above.