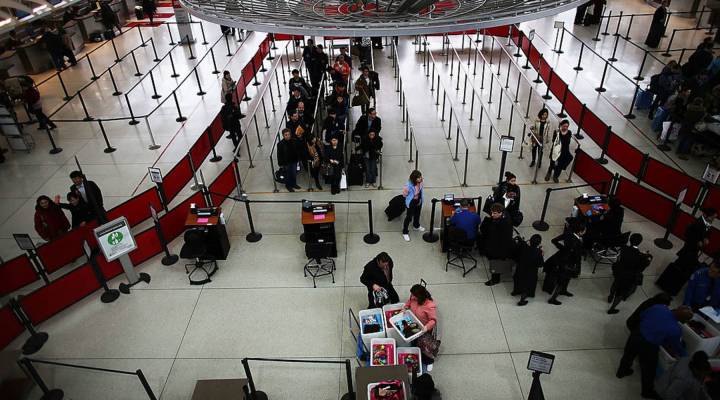 Flying in and out of major cities isn’t always convenient or cheap, especially for international travelers. Some turn to alternative airports that are a little farther from home or from their final destination.

New York City resident Kathleen Lavery traveled 60 miles to fly out of Stewart International Airport in Orange County, New York, near Newburgh. She visits her family in Dublin once a year and usually uses John F. Kennedy International Airport in Queens. But she took a chance on Stewart because it only cost her $240 round trip — one-third of what she usually pays at JFK.

“All of my friends and co-workers and other family members, no one’s even heard of this airport,” said Lavery on a shuttle bus direct from Stewart to NYC. “It was a completely different experience, almost comically simplified.”

Simple is a good way to describe Stewart. The airport started in the 1930s as an Air Force base, and military planes still make up much of its business. There are just a few airlines that fly there, among them American, Delta and Jet Blue. For most of the day, Stewart is eerily empty and filled with more wandering employees than travelers. The one terminal is a low-slung, brown concrete building, with a lonely Quiznos sandwich shop at the entrance.

The terminal at Stewart International Airport in Newburgh, New York.

Despite its size and location, it’s now considered a New York City-region airport, along with JFK, Newark and LaGuardia. This summer, Norwegian Air started offering $99 flights to Ireland, Scotland and Norway, targeting New York City residents and tourists. That is, in part, because the region’s airports are running out of space.

“We need more air capacity in the New York metropolitan area,” said Stewart General Manager Ed Harrison. “The region is growing and the region has to thrive.”

Bjorn Hanson, who teaches hospitality and tourism at New York University, said this lack of airport grandeur is what travelers have been looking for. Fewer flight delays, shorter TSA wait times, “parking is closer, parking is less expensive, the walk from check in to where the gate is can be shorter. I think this is a great option,” he said.

But Seth Kaplan, who runs Airlines Weekly, isn’t sure Stewart will take off.

“It is tough with alternative airports to market them abroad,” Kaplan said. “In some cases people who are coming to the United States for the first time have to be comfortable with the idea that they’re going to be able to get to where they’re going.”

In 2017, 400,000 travelers are expected to fly through Stewart. That’s compared to almost 59 million through JFK last year.

Alternative airport success stories do exist: Baltimore as a way to get to Washington, D.C., or Fort Lauderdale as a means to Miami. But these are all within a one-hour drive of their destinations. Stewart is pushing 80 minutes.

And that’s on a good day. In the end, it took Lavery two hours to get from the baggage carousel at Stewart to Port Authority in New York City.

“I think it’s all about expectations,” she said. “For me, it was such a price discount that I absolutely would do it again.”

That is, if those cheap flights still exist. Prices for roundtrip flights from Stewart to Dublin have gone up as much as six times what Lavery paid when she booked a couple months ago.