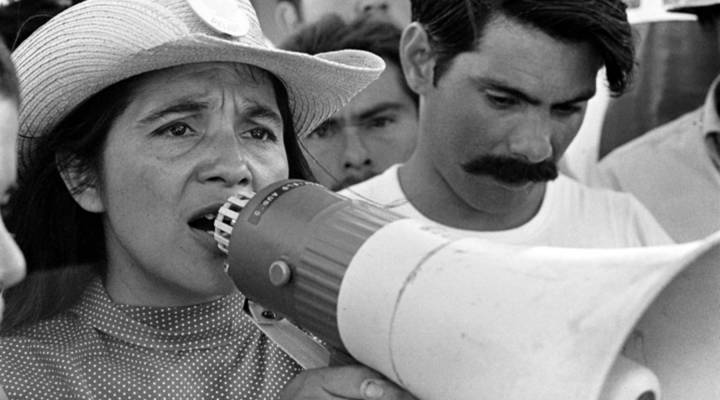 “Dolores” is a new feature-length documentary about Dolores Huerta, the labor organizer and activist who co-founded the National Farm Worker Association and later the United Farm Workers with Cesar Chavez. The film is directed by Peter Bratt, and Carlos Santana is the executive producer. Marketplace host Kai Ryssdal spoke with them about the film in the Marketplace studios. The following is an edited transcript of their conversation.

Kai Ryssdal: How did this movie come to pass?

Peter Bratt: See the man sitting next to me?

Ryssdal: Yes, was it your idea?

Santana: Because I felt that her story needs to come to light so that other women specifically, and men, but specifically women all over the world — India, Africa, South America — can recognize the value of your inner superpowers. For too long, women have been reduced to something that is not quite with equality.

Ryssdal: So much archival footage in this film and a lot of interviews with her kids — she has 11 children. You spent a lot of time sitting down with the kids, and one of them says, at one point, the movement was her favorite child.

Bratt: Became her No. 1 child.

Ryssdal: Became her No. 1 child, yeah. And that sort of hit me. The choices she made to serve those who can’t serve themselves, as somebody else in the film says, had a serious and lasting impact on her kids. They talk about this.

Bratt: Right. Yeah, before making the film, I knew a few of her children.

Ryssdal: Oh, did you?

Bratt: They all fight for social justice, in one way or another, and really carry the same fire as their mother, and I just felt, in order to tell this story, it had to be a family story. Particularly as Latinos, the family is at the center of life. And I felt that their voice would add so much dimension. And you do see the sacrifice. I do think certain individuals come to the planet missioned.

Bratt: And she’s definitely one of those great souls that came here with the mission, children or no children.

Ryssdal: Well, so there’s a joint interview with Dolores and Cesar Chavez, which you guys thread through the film. The interviewer asks Dolores, and it’s old, it’s probably 1965, ’68, whatever. The interviewer says, “Listen, if you’ve got $5,000 and I said you had to spend it only on yourself, what would you do?” And she said, “I would spend it on the movement.” In essence, that’s what she said. And the interviewer said, “No, you can’t do that.” And she said, “That’s what I’m going to do, sorry.”

Bratt: I mean, that’s what’s so fascinating about Dolores. She went to college. She became a teacher. She’s live in a relatively middle class life in the 1950s, early ’60s. And you know most stories are about a rags to riches. Hers is really a kind of riches to rags. She gives everything up, even her love of jazz. She wanted to be a professional dancer. She gives that up when she discovers her calling, and that’s, you know, she wants to liberate farm workers, and that becomes her life mission.

Dolores Huerta at the Delano Strike in 1966.

Ryssdal: There’s an interview you guys do, Carlos, with Angela Davis, in which she talks about what was happening in the ’60s in this country and how the time was ripe for what Dolores was trying to do. That it was a time where everybody thought this kind of social justice and economic justice was possible.

Santana: Yeah, we call it consciousness revolution. Consciousness revolution is about thinking with a different mind. So we just believed that there was another way to co-exist globally, collectively. And for me it was easy because being at Woodstock, it was the proof right there that quality and quantity can go together. Unity and harmony can go together. And that patriotism is prehistoric. That we need to get rid of flags, borders. We have a saying. It goes: Make the table longer and bigger, not the wall taller.

Ryssdal: Well, so out of that I have to ask this question, Peter Bratt: parallels to today?

Ryssdal: I mean, this film comes at an interesting time.

Bratt: I have to tell you, my brother here — and a lot of artists, they’re kind of tuned into another frequency — maybe not rationally he knew, but somehow when he called me, there was an urgency in his voice, “We have to tell this story right now.” That was five years ago, before the election of Donald Trump, the pardoning of Joe Arpaio, the talk about building a wall, the striking down of DACA. I mean, there’s an all-out war right now against Latinos. And as we saw in Charlottesville, eight years ago, we were supposedly post-racial when we had an African-American sitting in the White House. Come to find that elephant is still standing in the room. It’s something we have not dealt with as a nation. And Dolores’s story, in her example, it’s like an anecdote to what’s happening right now politically. And we didn’t foresee that when we started making this film.

Ryssdal: One of the things, Carlos Santana, that she says at the end of this movie is, the conversation at this point in the film had turned to her and her legacy, because she has now become a symbol of so many things.

Bratt: There’s nothing past tense about her.

Ryssdal: No, nothing at all, and I didn’t mean to imply that. But she says at one point, near the end of the film, “You know, I didn’t used to believe that I should talk about my achievements,” because so much of this film is about her role in the UFW and how, in the end, she got forced out when Cesar died. She didn’t get to run it, and she says, “You know, I used to not talk about my achievements for me, but I don’t believe in that anymore.” And she is now speaking out about women and what they can do in this economy.

Santana: There comes a point where you realize spirituality is certainty, not arrogance. Spirituality is celebrating you. We’re tattooed in the mind with guilt, shame, judgment, contempt and fear. I’m not worthy of God’s grace. All that bull**** is exactly that, mental slavery bull****. I say it like this, divinity is not in your DNA, divinity is your DNA. So, roll up your sleeves, create miracles and blessings.