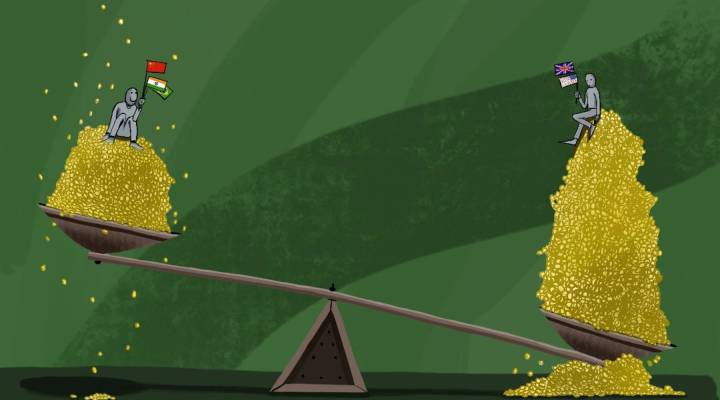 COPY
Globalization is helping countries like China and India catch up with Western countries. Ken Garduno, Illustrator
Trade Off: Stories of Globalization and Backlash

In rich countries, much of the talk about globalization focuses on jobs lost to lower-wage countries, and in many cases, technology. Most frequently, the emphasis of the new political angst about globalization is its costs. Not so for billions living in emerging economies, who are reaping a sizable share of the benefits in an interconnected world.

Case in point: India, the fastest-growing large country in the world. And to understand how quickly India Inc. is running, it helps to hang out with Indian men who are running — on a cricket pitch in Kansas City, Kansas. Yes, really.

Suresh Kannan (in red) and his Rockers cricket team in Olathe, Kansas.

The city is a technology hub, home to names like Sprint and Garmin. The Indian community here, now 7,000 strong, has boomed as the economy back in their home country has exploded. This is a global story of Indian talent connecting with U.S. education, technology and investment. Almost all of the bowlers (pitchers in baseball terms) and batsman (batters) on this Saturday morning are products of the Indian government opening up to competition and foreign investment the last two decades, and they’ve brought their education and job skills to the American Midwest.

“When I came here back in ’97, there [were] only maybe a couple teams,” said Suresh Kannan, cricket league president and Sprint IT manager. “Not great players. You had to call players and beg them to play. Since then, the total number of players are around 600.”

Cricket teams warm up before a Saturday morning game in Olathe.

But recent months have brought backlash and tension, forcing some Indians in the community to ask how open the United States remains to them. In February at a bar in the suburb of Olathe, a white man shot two Indian men — drinking buddies, information technology workers, cricket teammates — killing one of them. The shooter reportedly asked about the men’s immigration status before pulling the trigger.

‘Everybody feels vulnerable. Because we look different’

“Even if you’re born and raised here, when something like the shooting in Olathe happens in your community, everybody feels vulnerable. Because we look different,” said Aviva Ajmera, an Indian-American business strategy consultant in Kansas City. Ajmera was born in Albany, New York.

“You know, when three-quarters of the CEOs in Silicon Valley are from South Asia or from Asia,” Bannon said, “my point is that a country is more than an economy. We’re a civic society.”

“It is a much more broad-brush, pick everyone up, remove everyone, regardless of the facts of an individual case,” Sharma-Crawford said. “For the first time, what we’re starting to hear is people saying, ‘Maybe we don’t want to go to America.'”

“Corporations are kind of hesitant to process those things right now because of the existing uncertainty in the government,” said India-born Sateesh Kavi, technology analytics manager at Charter Communications. “They don’t know if Trump comes back and says, ‘No more immigration, no more H-1B.’ They may have to send them back out of their own expense.”

The resentment could have something to do with who’s catching up. For three decades, fast-growing countries like India and China have narrowed the gap with the rich world —something economists and historians often describe as a great convergence, following a long period of a widening gap, or great divergence. At the same time, working-class incomes in the U.S. have stayed flat. In trade and globalization, one person’s gain does not necessarily come at another’s expense (the total pie of growth and opportunities is not fixed, it is growing), but ex-World Bank economist Branko Milanovic of the City University of New York said some may think it does.

“That was seen as one indication why there was this discontent with globalization,” he said. “Or why maybe these people voted in favor of Brexit or Trump.”

In many cases, today’s emerging economies missed out on past booms, including the industrial revolution. But now they are growing very quickly and starting to “catch up,” as economists put it. The idea: Poorer countries can grow awfully quickly when they adopt proven technology and ideas put on the shelf by developed countries. A great visualization of today’s convergence is Milanovic’s so-called elephant chart.

In Kansas City, the earliest IT workers came in the ’90s. Back then, India was just emerging from a Soviet-style, centrally planned economy. As in, one single television channel, run by a state-owned operator.

“If you have a TV, you are a rich person,” said Kannan of the cricket league. “We basically forced our parents to buy a TV, and we bought a color TV. Then we were the popular family around the neighborhood. They used to call us ‘color TV family. Let’s go to color TV house.'”

Then, in 1991, India’s government opened up the country dramatically. And in came American companies, investors and low-brow TV shows.

“The popular show was ‘Jerry Springer’ show,” Kannan said, referring to the daytime reality program notorious for showcasing Americans arguing and fighting about domestic issues before live audiences. “We used to think it was all real. And watching ‘Baywatch’ was a shock for us, because that’s completely against Indian culture at the time.”

Kansas City IT entrepreneur Manoj Manathumaril said when he was a kid in India, there was one model of car on the road: the Hindustan Motors Ambassador. It was so noisy, kids playing in the street could safely hear it blocks away. Then came the affordable, fuel-efficient Suzuki car. Its only problem: too quiet.

“We used to tell people, ‘be careful, those cars don’t make any sounds,'” Manathumaril said.

He graduated college and then studied programming in India, which to many development theorists is a key ingredient to the country’s catch-up recipe, along with democracy, openness, investment and entrepreneurship. He was hired in the Bangalore office of the Digital Equipment Corp., based in faraway Massachusetts. At the time, U.S. tech firms were recruiting heavily in India.

“I think the primary motivation was the year 2000 computer problem, the Y2k problem,” Manathumaril said. “They were going to rewrite the code, so they needed huge manpower.”

Eventually he got hired by a firm in Silicon Valley and then moved to Kansas City to form his own company. He said he moved there because of the nice people and cheaper housing.

“The only thing we didn’t like is the cold,” he said.

Like all business owners, Manathumaril competes on price, and often the best bang for his buck is to outsource the simpler IT work back to India. That revenue back home is helping fuel a rising consumer economy. The average income in India is rising three times faster than here.

“We are really talking about a rebalancing of the world and significantly higher incomes in Asia,” said economist Milanovic. “I think openness and globalization played a very important role in that.” The upshot is that today there is a thicker global economic middle. “It is a very favorable, a very good development. And it led to the largest reshuffle of incomes since the Industrial Revolution,” Milanovic said.

Some believe that, despite the recent backlash, the U.S. will remain connected to the India growth story. Ramanan Laxminarayan is an economist and epidemiologist who lectures at Princeton. He said both countries are connected by language, democracy, technology and worldview.

“These are places that will be connected in mind, certainly not by geography, but certainly in mindspace, which is the most important space,” Laxminarayan. “I don’t think an H-1B problem of today or one crazy [shooter] guy in Kansas is going to change that story,” he said.

Laxminarayan is a U.S. citizen but now lives in India, where he started a company called Health Cubed. Its device brings diagnostic tests — cholesterol, pregnancy, HIV, malaria — to the village masses. India’s health market is the next big thing.

“As you grow wealthier, you actually want the health in order to be able to enjoy that wealth. There’s no point in dying off at the age of 30 after you’ve made a lot of money,” said Laxminarayan.

But currently the average annual economic output per person in India is about $2,000 dollars, compared to about $57,000 in the U.S. — this according to the metric known as GDP per capita. While India is catching up with richer economies, there’s still a long way to go — which can also be said of this correspondent trying to play cricket.