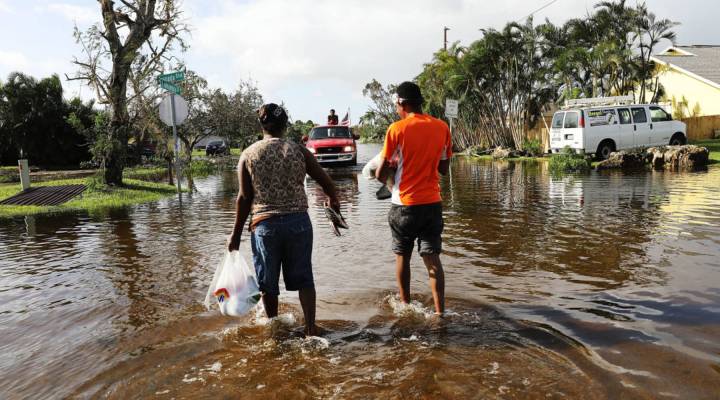 COPY
A couple walks through the flooded streets of Naples, Florida, today. Hurricane Irma made another landfall near Naples yesterday after inundating the Florida Keys. Electricity was out in much of the region. Spencer Platt/Getty Images
Weather Economy

A couple walks through the flooded streets of Naples, Florida, today. Hurricane Irma made another landfall near Naples yesterday after inundating the Florida Keys. Electricity was out in much of the region. Spencer Platt/Getty Images
Listen Now

Hurricane Irma is going to create many big and lasting problems for the areas hit. Housing is one — where to put people while their homes are rebuilt or renovated. Electricity is another. Florida Power and Light, the state’s biggest utility, said almost 3.5 million of its customers were still without power today; statewide, it’s close to 7 million or 8 million households and businesses. Marketplace host Kai Ryssdal called up Sustainability Desk reporter Scott Tong to find out more about the tough process of getting the lights back on.

Kai Ryssdal: Question No. 1 I think has to be: Where do they start? With so many people out of power and such havoc on the ground.

Scott Tong: Well, they start with the power plants and the long-distance power lines, where the energy comes from in the first place. And then you start with the important places for public safety and security: hospitals, police stations, fire stations, communications facilities. And then they try to restore power to where the largest number of customers can get power in the shortest amount of time. That’s the eastern side. In western Florida, parts of the grid, according to Florida Power and Light, have to be completely rebuilt, which will be a matter of weeks. We’re talking about not just lights, but refrigeration, gasoline pumps, medical facilities, hospice facilities — could be staggering.

Ryssdal: When you say rebuild the grid — and that’s what they’re saying down there, actually — what does that mean? That’s more than just poles and wires at the consumer end of this thing, right?

Tong: It’s all the connecting pieces in our modern grid. Our grid is poles and wire system where electricity is generated somewhere and it’s often carried long distances to the population center. So what went down here: long-distance transmission lines, which are high voltage. You need transformers to step up the voltage. Those went out. You have substations, you have the local lines outside people’s homes. In total, they’re talking about thousands of miles of new lines that they’re going to have to lay. So this might sound like failure, right? But Florida’s grid is actually one of the most hardened in the country. They put in $3 billion to try to prepare for this. They’ve learned from past storms. They’ve cut back tree limbs, they’ve replaced wood poles with concrete, and sensors and meters to detect when something is going on. So I guess, in the grid’s defense, this is an amazing engineering feat that’s a century old, and it’s the system that we’re dealing with now.

Ryssdal: I wonder if, and I hate to say it this way, but this is an opportunity to build back in a more resistant way? Because it’s not like, given climate change, we’re going to get fewer of these storms.

Tong: “Build back better” is a phrase you hear a lot of people use with regard to the grids. After Superstorm Sandy, in the Northeast, there was a lot of talk about this. The states of New York, New Jersey, Connecticut pass bills, and one thing they did in addition to kind of stronger pieces was to pay for what are called micro-grids. That is, at universities, at hospitals, places where it’s really important to not lose power, they have generation onsite. And so if the rest of the grid goes out these micro-grids can still operate. So the question that a lot of people are asking is “When it gets time for Florida to rebuild, how forward thinking might they be?”

Ryssdal: We talk a lot, actually, just along those lines of rebuilding — we talk a lot about the power grid. But the fact is, we don’t have a power grid, right? We have state and maybe regional power structures in this country, right?

Tong: Well, yeah, and the history was a lot of regional grids that were mostly in the urban centers — and this is a 100-year-old story — and then around the World War I is when they started to get interconnected. So the origins are not like this great federal national level master plan, but they just kind of connected them that way. And so that’s kind of the system we have. We have old equipment, and as you say, we have more frequent extreme events, right?