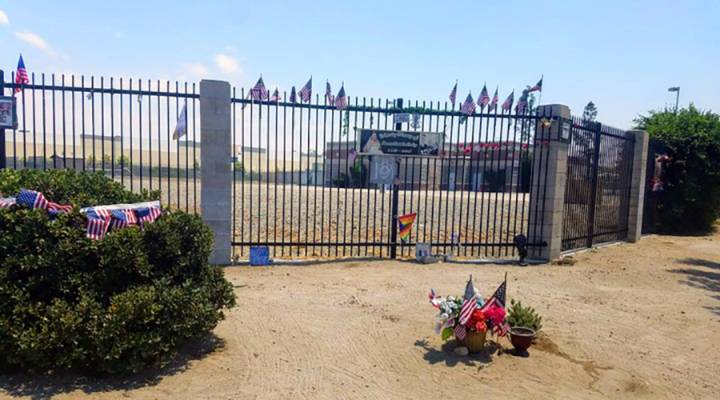 COPY
The temporary memorial to the victims of the San Bernardino shooting. Adriene Hill/Marketplace

The temporary memorial to the victims of the San Bernardino shooting. Adriene Hill/Marketplace
Listen Now

On Dec. 2, 2015, in San Bernardino, California, a shooter killed 14 people in an attack at the Inland Regional Center.

Today, there’s a temporary memorial to the victims set up along a busy stretch of road. There are sun-bleached flowers, American flags, a laminated poster with pictures of those who died.

There’s a small planted Christmas tree that someone is still watering, and a couple trash bags filled with older flowers and stuffed animals that have been gathered up but not thrown away.

The county, along with a committee that includes the families of the victims, has begun the work of planning something more permanent.

“They want a place to honor the people that were taken from us,” said Felisa Cardona, a public information officer for the county. “They are looking for something that also acknowledges what the wounded went through, what the first responders went through.”

Today, a little more than a year and half after the shooting, they have just started looking for a consultant to help with the design process. The county doesn’t know yet what the budget for the project might be.

They are questions confronting many communities around the country — how to memorialize and how to fund memorials to honor victims of mass violence.

In order to take the next step in San Bernardino, Cardona called Heather Dearman in Aurora for advice.

“When they called, I just had such a great feeling of fulfillment,” said Dearman, who is the vice chair of the 7/20 Memorial Foundation, the group working to build a memorial to the victims of the Aurora movie theater shooting in 2012. “Knowing that we can help other people get through what we have gone through means that what we’re doing is so important. And we’re doing the right thing.”

Dearman is the cousin of Ashley Moser and Veronica Moser-Sullivan. Ashely was wounded; 6-year-old Veronica was killed.

An essential part of the healing process in Aurora has been fundraising, Dearman said. It took the group more than four years to raise the $200,000 it needed to build the memorial. They raised money quarter by quarter and dollar by dollar, setting up booths at local events and holding fundraisers at local businesses. A church pitched in more than $100,000.

Dearman advised communities going through this process to raise the money themselves. Every time someone chips in or offers a hug, said Dearman, “it’s proof that love always wins.”

And that is part of what drives her to do this work, to prove to her kids that there’s more good than evil in the world.

“They still have their moments when I think that I haven’t shown them enough proof,” she said. But she thinks that when they see the memorial, “that’ll probably be the moment that sends them over the edge into believing.”

The 7/20 Memorial Foundation announced the winning design for the memorial a few weeks ago. It’ll consist of 83 sculptural birds, representing those killed and injured, flocking toward the sky.