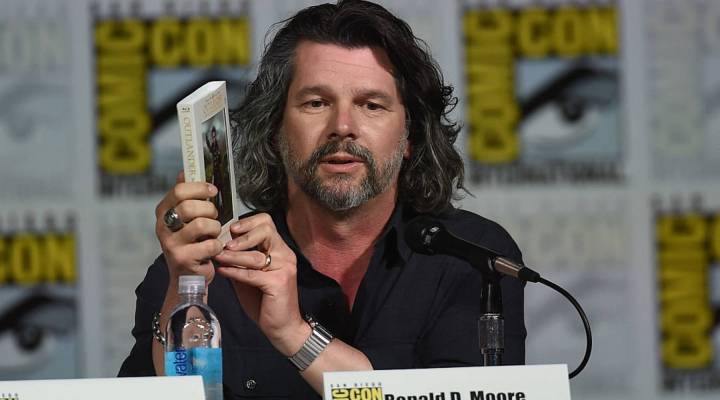 COPY
Writer-producer Ronald D. Moore's latest stint is with the time-traveling "Outlander." His earlier work includes "Star Trek: The Next Generation" and the reboot of "Battlestar Galactica." Above, Moore speaks at a 2015 Comic-Con panel in San Diego, California. Ethan Miller/Getty Images

Writer-producer Ronald D. Moore's latest stint is with the time-traveling "Outlander." His earlier work includes "Star Trek: The Next Generation" and the reboot of "Battlestar Galactica." Above, Moore speaks at a 2015 Comic-Con panel in San Diego, California. Ethan Miller/Getty Images
Listen Now

It’s a big weekend for fans of the historical time traveler genre. The third season of “Outlander” starts Sunday. Ronald D. Moore is the guy in charge, and “Outlander” is his latest stint in a career that started with “Star Trek: The Next Generation” and the reboot of “Battlestar Galactica.”

Kai Ryssdal spoke with Moore about writing subtext in science fiction, why he first agreed to do the reboot of “Battlestar Galactica” and what he sees as the increasing “tribalism of points of view.” Below is an edited transcript of their conversation.

Kai Ryssdal: I’m going to read your quote, and it’s you actually talking about what you do and how you do it. And then I want to get your reaction. You said, “If you put these things in a science fiction context, you get a free pass not just from networks but from audiences as well, because you’re allowing them to think about things in a way that doesn’t threaten anybody,” which makes sense, but explain it.

Ronald D. Moore: I think I was talking there about “Battlestar Galactica” and in particular probably “Star Trek” and other science fiction pieces. Essentially, you know, one of the great advantages of working in science fiction is it does give you an opportunity to talk about interesting and somewhat controversial themes and social issues and in a way that doesn’t really threaten the audience, because I’m not challenging their particular points of view.

Ryssdal: You’re a “Star Trek guy” from way back, like the original series?

Moore: I grew up with it, yeah.

Ryssdal: Even back then you thought there were lessons in here?

Moore: I did. I think I started watching “Trek” in the mid-70s when I was in elementary school and I was just into space. Somewhere along the way I started realizing there were really interesting ideas in the show.

Ryssdal: How did you get to “Battlestar Galactica”? I mean, not too fast forward too far.

Moore: I got a call from an executive at Universal, and I said give me the weekend to think about it. And I went out and tracked down a VHS copy of the original at Blockbuster — ask your parents. Watched it over that weekend, and this was like January, February of 2002. So it’s just a few months after the 9/11 attacks, and when I watched the original “Battlestar” pilot at that moment in time, I realized almost immediately that if you did this show now, at that time and place, it would have a completely different resonance. And I thought this is an enormous opportunity, to do something relevant, to do something that’s commenting about our society and the times that we were living with and to get science fiction back to what I thought the original “Star Trek” did, which was to talk about society and talk about the things we were going through in a science fiction way and view it through that lens. So I called him back on Monday and said, “Yeah, let’s do it.”

Ryssdal: You do “Battlestar Galactica.” You have great success, you win a Peabody. I mean it does really, really well, and it is still to this day a cultural thing. How do you go from there to “Outlander,” which while interesting and creative, is not quite science fiction and it’s also sort of got a different lens on it.

Moore: It was interesting, now looking back on it, because I never had the experience of reading the book as a book to just sit and enjoy. I read it as a piece of material like can I adapt this right off the bat? It’s a bit more clinical. I like the attention to detail that Diana Gabaldon had done — she is the author of the book — and as I was reading. I could just kind of, like, lay out the chapters in the episodes in my head. And by the time I finished the book I thought, “Yeah, I can see this as a season of television. So I was kind of sold, and said, “All right. Well, let’s look into the rights and let’s move forward.”

Ryssdal: As you think about these times we’re in — much as you thought about Sept. 11 when you were thinking about “Battlestar Galactica” — where do your thoughts go in terms of creative material for you?

Moore: It’s such a time of turmoil, culturally and politically. You know, it’s hard to sort of grapple onto one particular direction. It’s almost like I wish I could wait a few years and look back and then [say] “Oh, OK, here’s what I can kind of think with a little bit of perspective.” I mean, all I know right now is I think about future projects is that there’s a dynamic collision of many forces and that there’s a tribalism I keep seeing. That’s the one theme that it feels like has been resonant since the last 15 to 20 years is the increasing tribalism of points of view, you know, and where does that lead us as a culture? And that’s an interesting territory to go in and talk about.

Correction (Dec. 4, 2017): The caption in an earlier version of this story misstated the year of the Comic-Con panel. The text as been corrected.