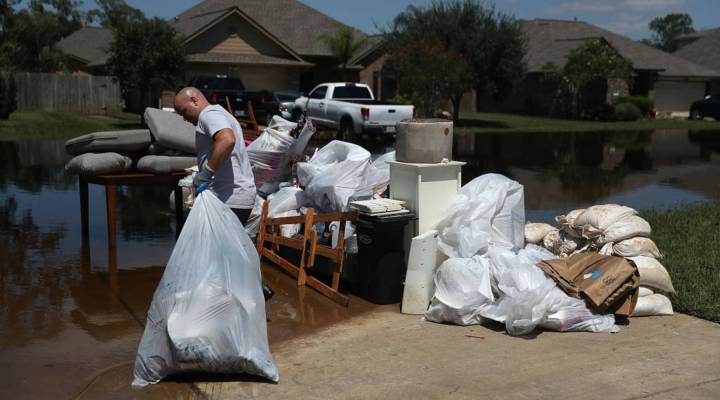 Justin Davison pulls a trash bag full of flood-damaged items to a trash pile today as he helps a friend clean out his flooded home in Richwood, Texas. Justin Sullivan/Getty Images
Listen Now

There are two distinct phases to disasters like hurricanes Harvey and Irma: the immediate response, generally lead by FEMA, which seeks to ensure residents in the path of the storm are safe, dry and fed. As the flood waters recede, that response then gives way to the long-term recovery.

Funding for this second phase requires a special appropriation from Congress, which can take weeks. Once passed, much of the housing money typically flows through the Department of Housing and Urban Development, and then into community block grants to state and local governments.

It’s those state and local governments that are responsible for designing and implementing most housing recovery programs — the money homeowners get after exhausting other options, like insurance claims.

“Most of our grantees do not have a long-term recovery plan of major scope just sitting in their file drawer,” said Stan Gimont, deputy assistant secretary for grant programs at HUD. “In many cases, they have to start from scratch and think about exactly how they’ll do this locally.”

That means figuring out what types of grants to make available, which might entail research on past recovery programs in other states. It also may also require a staffing plan, hiring contractors and building an information technology system.

“Every disaster is different,” Gimont said of why local leaders take charge of long-term recovery plans instead of federal agencies. The idea is those closest to the damage will be best at figuring out how to respond to it while taking local laws into consideration.

However, recovery results may vary.

“In some places, there are very good outcomes,” he said. “In some cases, they’re not always what we’d hope.”

Gimont said “managed programs,” where a local agency oversees the construction process for a homeowner, tend to work better than those that let people do it themselves, but they can also take longer to set up.

But starting from scratch on these plans after each disaster is slow and inefficient, said Brad Gair, who’s worked in disaster recovery at FEMA and for the city of New York after 9/11 and Hurricane Sandy.

Take, for example, setting up the technology to process and manage claims.

“To create an online portal with a case management system backing up is really, really expensive,” said Gair, now the senior managing director with Witt O’Brien, a disaster management consulting firm. “It spends a lot of the money that could otherwise go to the disaster survivors and delays the rollout of the program.”

Gair said other holdups, such as limited data sharing across agencies, could be addressed before a disaster through off-the-shelf recovery plans from HUD, which states could tweak to their needs.

“All we would ask in an off-the-shelf program [is to] resolve all these bureaucratic issues for us, give us the technology, the portal and the backend that we need, and then give us a few simple programs that we can already just make a few tweaks to customize it for our particular situation,” he said. “This could happen much faster.”

After Hurricane Sandy flooded Lisa Stevens’ home on the Jersey Shore in 2012, it took her until April 2016 to finalize her last repairs, including learning late in the rebuilding process that she needed to elevate her home.

It was a crash course in the bureaucracy of disaster recovery.

“We didn’t know what we were facing and how long the recovery process was going to be,” she said. “I’ve seen people come into programs literally with three ring binders and every piece of paper, every receipt, every document.”

Her advice for Harvey and Irma survivors: Document everything.