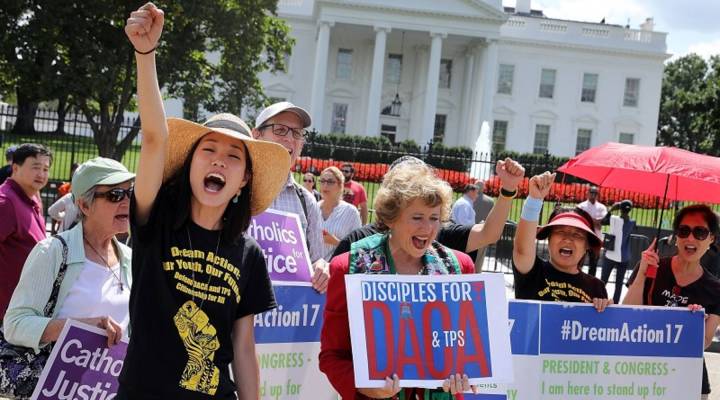 COPY
Activists rally in support of the Deferred Action for Childhood Arrivals program in front of the White House on Aug. 30. Photo by Chip Somodevilla/Getty Images

Activists rally in support of the Deferred Action for Childhood Arrivals program in front of the White House on Aug. 30. Photo by Chip Somodevilla/Getty Images
Listen Now

This story has been updated. It originally published on Sept. 4, 2017.

President Donald Trump announced plans Tuesday to roll back the Deferred Action for Childhood Arrivals program, but with a six month delay that would allow Congress to act. Last week, corporate leaders came to the defense of DACA recipients, also called Dreamers, who get deportation relief and temporary work authorization through the program.

Hundreds of CEOs — from Apple’s Tim Cook to Amazon’s Jeff Bezos — signed on to a letter urging Trump and Congress to preserve DACA. Both Apple and Microsoft have said they will appeal to Congress to find a legislative solution to the rollback of DACA and will offer legal support to their employees affected by it.

What impact that letter and any additional corporate advocacy will have on Congress remains to be seen. Americus Reed is a marketing professor at The Wharton School. He said past pressure from business leaders hasn’t changed Trump’s mind. But even if Trump decides to repeal DACA, business advocacy could mean something to Congress, and how strongly it acts to save the program.

“This is not the end of the story. Congress can act today,” Jeremy Robbins, executive director of New American Economy told the Washington Post on Monday. The New American Economy plans to bring together more than 100 corporate and conservative leaders to begin putting pressure on Congress to act, lobbying both in private meetings as well as at public events.

More than 700,000 DACA recipients are believed to hold jobs in the U.S. Seventy-two percent of the top 25 Fortune 500 companies have DACA employees on the payroll. The majority of Americans support protecting DACA recipients in some form, according to multiple polls.