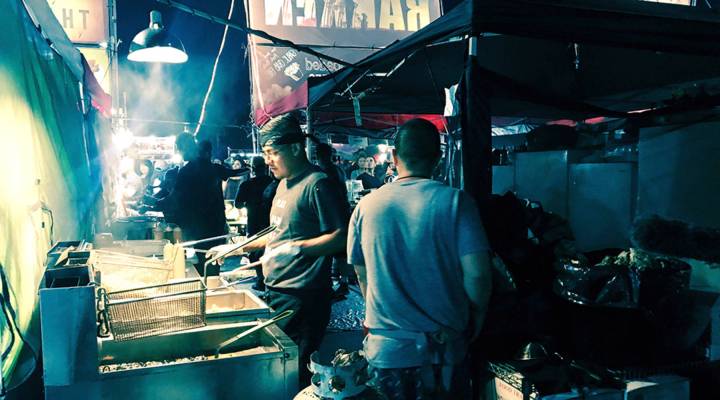 Open-air night markets are ubiquitous in many parts of East Asia. Taipei, Shanghai and Bangkok host some of the larger ones. Think of them as night bazaars where people walk around, eat, drink and shop. Nowadays, the idea of the night market has spread to many cities in the United States, such as Los Angeles.

On any given weekend in the summer months, 100,000 people stream through the gates of the Santa Anita Park racetrack in Arcadia, California, near Pasadena. But these folks aren’t here to watch the ponies race. They’re here for the 626 Night Market.

Six-year-old Elena Leyva has been a couple of times with her mom and sister. She’s sold on the idea.

On a Sunday night in August, more than 30,000 people stream through the gates of the Santa Anita Park racetrack for the 626 Night Market.

Although Elena and her family didn’t travel outside the park, it feels like a lot of places because there are nearly 200 vendors selling lots of different things: clothes, toys, knickknacks and lots of food. There are stalls with ramen tacos, chicken skin nachos and stinky tofu, among many other items.

The guy who started 626 almost seven years ago, Jonny Hwang, said he wanted to recreate the night markets of his childhood in Taiwan. He soon found out that was easier said than done.

“They set up in the streets, and they don’t have these requirements that the health department here does, for good reason,” Hwang explained. “So we kind of wanted to evolve it, American style.”

“When we threw out that 10,000 number, they laughed at us,” he said. “They were like, “You’ll be lucky if you guys get 500 people.” The first iteration of the 626 Night Market was on a city street in Pasadena. Hwang said he told city officials to expect around 10,000 people.

About 30,000 people showed up, according to estimates from the city. That’s with no advertising, only social media. Hwang said he wasn’t ready.

“We had, like, 300 one-star Yelp reviews after the first event,” Hwang joked. “I’m pretty sure that’s a record.” And maybe a back-handed compliment. People were upset at how long the lines were to get food.

Hwang said in the first year, 626 had trouble getting vendors to sign up. Now they have a waiting list.

Ken Nguyen, owner of a pop-up called Rakken Tacos, said for him, the market is a great return on investment.

“The time that I spend here and the ratio that we make here far surpasses anything I do,” Nguyen said.

Hwang said he’s excited about how diverse the crowd is these days. Initially, it was almost entirely Asians. That’s not the case, now.

“Close to 30 percent are non-Asians,” Hwang said. “Slowly, as we had more events, we would notice Asians taking non-Asians, and now it’s just non-Asians just showing up by themselves.”

Hwang said 626 still doesn’t promote the events. But when you ask people here how they heard about it, they’ll probably tell you one thing: “I saw it on Instagram.”