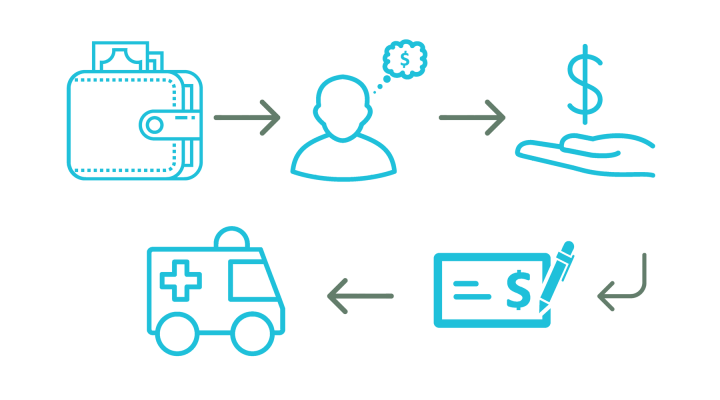 When disaster strikes, we want to help. It’s human impulse, after all. And, often that means money.

In the wake of Hurricane Harvey and the flooding in Houston, the calls for monetary donations have been loud and clear — from individuals, companies and charities alike.

While some are quick to give, others are wary. And rightfully so. A 2014 investigation by NPR and Propublica showed that the American Red Cross, the country’s leading disaster-relief group, mishandled donations.

Still, people like Lori Massad, want to chip in to help. She donated to the Red Cross the first day she heard about flooding.

“Then I gave more when I saw how bad it was,” Massad said. “So, I probably gave three days in a row.”

So, what happens when you donate? Where do your dollars actually go? Well, there’s a journey between your pocket and the people in need — and a few pit stops along the way.

OK, so there’s a  dollar bill in your pocket. And you want to donate it. But remember, this is a journey. Every good journey needs a plan. So, before donating, take an important step: research.

“It’s a good rule of thumb to just know this is a healthy charity,” says Michael Thatcher, chief executive officer at Charity Navigator. “The next piece is ‘Is this healthy charity doing work that I really care about?'”

So, look around and find a place you believe in. And before saying bon voyage to your money, it’s time to answer a big question: Is your dollar designated or undesignated?

Charities often have different funds for donations. And it’s up to the contributor to choose whether to earmark funds for a certain cause or to let the organization use it as they see fit. Thatcher says if you trust the organization, it’s wise to give an undesignated gift.

“Think of it as an investment,” Thatcher says. “You’re essentially letting them make the right choices with that money.”

So you picked an organization. Decided how you want to mark the funds. And the journey begins.

First, the charity gets your money and process it with their bank. It doesn’t matter if you’ve sent your money by mail, electronically, online or by text. They process the money and deposit it into the appropriate account.

Let’s look at the example of a charity that was set up following Hurricane Harvey’s destruction — the Hurricane Harvey Relief Fund.  The fund, overseen by the Greater Houston Community Foundation, is currently accepting and processing direct donations from all over the country. The fund received over $2 million in individual credit card contributions in the first few days following the disaster.

After receiving donations, the Greater Houston Community Foundation turns your money into a grant for a local group.

Or your dollar could hang out for a bit. Take a break on its journey. And then be deployed later to a long-term project, like housing recovery or mental health services.

Let’s say your dollar goes right to the action, .through a quick grant or you happen to donate directly to a place doing work on the ground. At the Houston Food Bank people are working around the clock.

“Not a lot of hours of sleep, but I’m safe and dry which is good,” said Amy Ragan, the  Houston Food Bank’s chief development officer.

Ragan said that if a dollar comes in specifically marked for disaster relief, it can be put right to use.  That’s why they’re asking people to designate their money for disaster relief. Ragan appreciates food donations, but says donating money is better.

“We can do a lot more with that dollar than you or anyone else can if they go to the grocery store,” Ragan said.

The food bank can turn one dollar into three meals. So, why’s the dollar suddenly going further than at your grocery store? Well, the food bank can get cheaper food prices or has food that’s already been donated. Ragan says a donated bill goes where they need it: for fuel and transportation to bring in and distribute food.

“You know tractor trailer loads of food,” Ragan said. “So we can make sure we have pallets and pallets and hundreds of thousands of pounds of nonperishable food loaded into our trucks and then taken on the road.”

At the Texas Diaper Bank, your dollar can also take on new life as it ends it’s journey. The bank provides diapers for infants, people with disabilities and seniors. They can buy diapers at half the price of their retail cost by buying from manufacturers.

“Volunteers will help us repackage those items, sort them out, get the orders ready for the shelters that are providing assistance,” said Jorge Medina, executive director of the Texas Diaper Bank. “Then they are distributed.”

And then, your dollar goes where you wanted it to in the first place: to people.