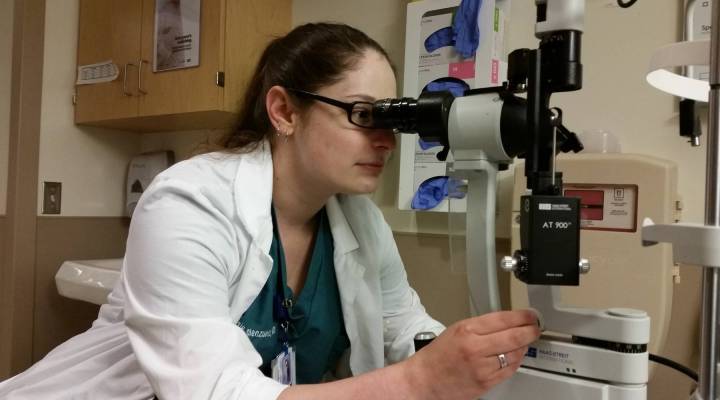 Josie Valenzuela was near the end of her shift at San Francisco General Hospital, where she was a resident, trying to stay awake.  It was  1 am on a Saturday and ambulances were rolling in one after another.

“I was really tired. And my back hurt a lot,” she said. “My mind was wandering all over the place.”

She was caring for a heroin addict, cutting an abscess open on the patient’s leg to drain infection, she said. Then her pager went off. Another ambulance was coming in and this patient would have to wait for later.

“So I went to put the scalpel in some sterile towels for when I could come back,” Valenzuela said, “and I cut my left index finger.”

The patient had HIV and hepatitis C.

“I knew this was a bad exposure, and that all of the blood and pus that was on that scalpel was now touching my bloodstream,” she said.

Valenzuela would have to take anti-viral medications that would make her nauseated for weeks. And she’d have to explain to her husband that she might have contracted a life-long disease.

“We were going to start trying to have kids soon,” she said,  “and so that would make it complicated for us.”

The university in charge of Valenzuela’s residency, UC San Francisco School of Medicine, wouldn’t comment on her case, but vice dean Sue Carlisle said the university encourages residents to take breaks when they’re fatigued, and provides taxi vouchers if they’re too tired to drive. But when it comes to scheduling residents, Carlisle said, they are bound by rules established by the national Accreditation Council for Graduate Medical Education.

The council sets limits on how long residents can work, and up until 2011, that maximum was 28 hours. But following a scientific review by the Institute of Medicine, which concluded that human performance begins to decline after 16 hours, and the risk of medical errors and car accidents goes up, the medical education council made a rule, saying first-year doctors could only work a maximum of 16 hours per shift.

But this year, the council reversed itself, and starting this summer, new doctors can again work up to 28 hours in a row.

“I think the majority of patients in the United States expect that their physician will be available to them whether it’s daytime, nighttime, Saturday or Sunday,” said Dr. Rowen Zetterman, co-chair of the task force that reviewed and changed the rule.

Patient and resident groups wanted to keep the 16-hour rule, Zetterman said. But senior doctors argued that long hours come with the profession. They said that the shift limits cut into the time they had for teaching in the hospital, compromising the educational integrity of the residency.

“You ask residents a question and they’ll say, ‘I’m just covering, I don’t know those things.’ That drives the more senior physicians batty,” said Adams Dudley, a pulmonologist and professor at UCSF School of Medicine. “The perception is they don’t know what they’re doing as well because they spend less time at the hospital.”

Physicians said that residents don’t seem as invested in the work when shorter shift limits are in effect,  because they’re more focused on handing off their patients to others, rather than seeing them through the cycle of illness.

“Because they leave, they don’t see the evolution of things, and they don’t know the patients as well,” Dudley said. “If you’re told you must pay attention to leaving, you have to detach yourself from the patient.”

“They would be in the middle of an operation that they felt like they were learning from, and they would hit the end of their 16 hours and be told that they had to leave the operation and go home,” Zetterman said.

This hurt morale on the health care team, he added, as other doctors watched first-year residents clock out when they had to stay. It raised patient-safety concerns, too.

“Let’s say your copilot kept coming and going throughout the flight and, then was gone. Didn’t come back for the remainder that flight,” Zetterman said. “It seems to me that would be disruptive.”

It’s unclear what’s riskier for patients: more frequent hand-offs between doctors, or doctors who are just exhausted. Most studies show little or no change in patient outcomes after shift limits were put in place, suggesting mistakes and miscommunications that resulted from transitions in care offset any gains made from reducing doctor fatigue.

If that’s the case, Valenzuela said there should be more focus on residents’ well-being, in addition to the well-being of patients. And while the shift limit was extended to 28 hours, other rules require residency programs to provide more support for residents who feel burned out, stressed, or depressed, including 24/7 access to a mental health professional.

Valenzuela is in her last year of residency now at the University of Arizona. She said she was lucky following  that accidental cut.  After nearly a year of periodic checks, she’s been officially declared negative for HIV and hepatitis C.  Next year, she and her husband plan to have a baby.