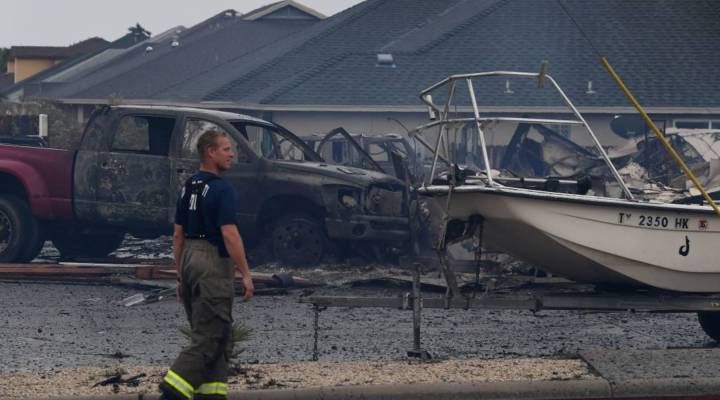 President Donald Trump and First Lady Melania Trump landed in Corpus Christi today to check in on Harvey relief efforts. Strong winds of over 100 mph were recorded just northeast of Corpus Christi. Although flooding wasn’t as deep as other affected areas, the Port of Corpus Christi is currently shut down. It’s the sixth largest port in the United States.

Marketplace host Kai Ryssdal spoke to John LaRue, the executive director of the Port of Corpus Christi. The following is an edited transcript of their conversation.

Kai Ryssdal: First things first, what’s the status? How you doing down there?

John LaRue: We’re doing OK. You know, obviously, not great, but much better than a lot of the other communities north of us. The storm in the eye wall went about 25 miles to our North and East. So, we missed the brunt of it. We had winds here at the port administration building on Friday evening, about 105 miles an hour versus 135 or more, 25 miles away, so major damage to the port and our facilities was avoided. We were really concerned that we’re going to have a major flood event with the hurricane and we did not have that.

Ryssdal: When do you expect to be, or are you already, up and running at full port capacity?

LaRue: We are not. We’re just working right now, we have to work with, obviously, a number of federal agencies, but principally to get the ship channel back up and operating. The Coast Guard has to look at all the surveys that we’re doing and the private industry are doing of the docks and facilities, and make sure they’re safe and secure. And then the Corps of Engineers do a physical survey where they look underwater at the ship channel and make sure there is no obstructions or shoalings and they’re completing that today. We hope to have a dredging team here by the end of the week. We hope to be open as soon as practical after that. We will be ready. We just had a meeting with AEP, our electric provider here in Corpus Christi, and they’re getting almost all the industry back up on the electric grid today. So, we’re not far away from returning to operations.

Ryssdal: Big picture for me then as you think about your colleagues sort of up into the northeast through Houston and now into Louisiana, for the rest of the national economy and the petrochemical industry down there, what’s your sense of how that’s going to go in the next days and weeks?

LaRue: Well it depends on the flooding and what happens to the flooding in some of the major petrochemical industries in the Houston ship channel and in Beaumont and Port Arthur. That is depending on what numbers you want to use — 25 to 35 percent of the capacity for refining in the United States — so any shut down there, and right now the Houston ship channel shutdown, will impact gas prices and supplies in the near term. Hopefully they’re gonna be OK. We’ve had the wind, they’re getting the water.