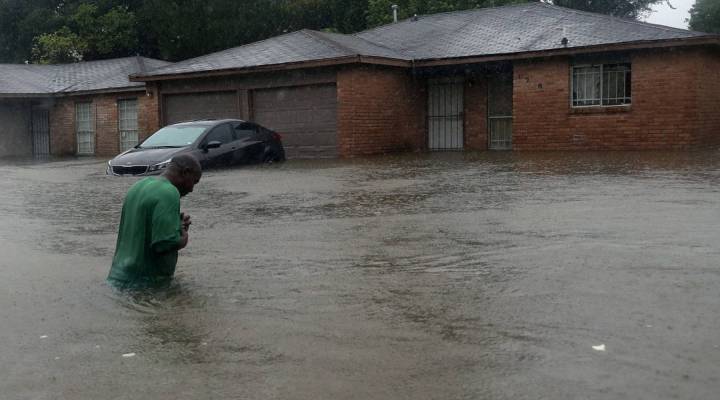 COPY
A person waits to be rescued from his flooded home yesterday after Houston was inundated with rain from Hurricane Harvey. Joe Raedle/Getty Images
Weather Economy

A person waits to be rescued from his flooded home yesterday after Houston was inundated with rain from Hurricane Harvey. Joe Raedle/Getty Images
Listen Now

For the last two days, 25-year-old Sean Burtt has been crashing on his friend’s air mattress. His home in Spring, Texas, is ruined after heavy downpour from Hurricane Harvey seeped in.

“It came through my front door, my front window of the house, it came in through the bathroom downstairs. It was just coming in from everywhere,” Burtt explained.

The water reached up to his stomach. To make up for his losses, which include a 50-inch TV, washer, dryer and his furniture, Burtt set up a GoFundMe page. That was after he realized his homeowners insurance doesn’t cover floods.

“Honestly, [I] never really expected my house to get flooded,” said Burtt, who works as a car salesman.

At least 80 percent of those affected by Harvey don’t carry flood insurance, said Chuck Watson, director of research and development at Enki Holdings. “It’s because if you’re not in a flood zone, chances are nobody even asked you if you want flood insurance,” Watson said.

Only people in flood-risk areas who carry mortgages are required to buy insurance. Most buy policies backed by the federal government’s National Flood Insurance Program, which is already struggling with a nearly $25 billion debt.

“With Hurricane Katrina, in that year, the program paid out more in claims than it had ever paid over the entire life of the program to that point,” said Carolyn Kousky, director for policy research and engagement at the Wharton Risk Management and Decision Processes Center.

And, since 2005, the claims have kept building up.

“The Treasury is loaning the flood insurance program money, but it can never pay it back, because before it can pay it back, there’s another storm,” Watson explained.

So why exactly does the program pay out much more than it collects? Let’s go back to the beginning.

In 1927, the federal government stepped in with disaster aid for the first time after a huge flood along the Mississippi River. By the 1960s, after costs kept racking up, there was pressure to cut back on that aid. One solution was the National Flood Insurance Program.

“The program was paired with the idea that there would be flood plain management that would reduce the risks, so that when there were floods, there would be less damage,” said Jennifer Wriggins, a professor who specializes in insurance at the University of Maine School of Law.

But the costs kept mounting, partly because the program still offers subsidized rates to many of its 5 million policyholders.

When the program was first established in 1968, “Congress didn’t want to unfairly penalize those homeowners who built before they were told they were at risk, so they’ve been getting discounts on their rates,” Kousky said.

But, she noted, those discounts are getting phased out. Kousky said other policyholders get discounts if they have “grandfathered properties,” which allows them to pay lower premiums when flood maps change.

At this point, there’s no foreseeable way the program is ever going to be able to repay its debt without huge increases in rates, Kousky said.

“There’s an ongoing tension between wanting rates to be low and affordable for people, but also wanting them to reflect risk,” she explained.

She said one solution is to price based on risk and give discounts to lower-income households, a proposal Congress could consider when it decides whether to reauthorize the program next month.

Others advocate getting rid of NFIP altogether and going back to private flood insurance. But one reason many private insurers don’t enter this space is because flood maps are often based on outdated data, Wriggins said.

“If you do not have accurate information about risk, it’s very hard to price insurance accurately.”

And floods present a catastrophic risk, added Mark Browne, a professor of risk management and insurance at St. John’s University in New York.

“Meaning that when it happens, it affects a lot of different businesses and individuals at the same time,” he said.