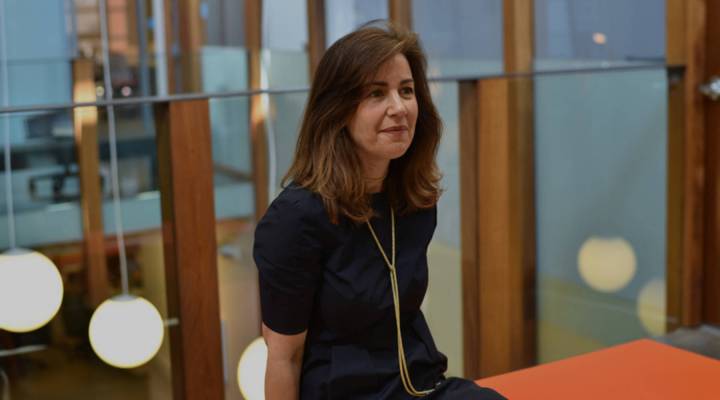 You probably know Chronicle Books even if you didn’t realize it. The San Francisco-based publisher has a thick catalog of illustrated nonfiction titles, from cookbooks (like Julia Turshen’s “Small Victories”) to pop culture (see, “Star Wars Super Graphic”), and a large children’s book division too. For years, they’ve been selling these books in retail stores like Urban Outfitters and Williams Sonoma, not just the big bookstores.

But that strategy is why Tyrrell Mahoney, the president of Chronicle Books, is keeping a close eye on what non-bookstore retailers are up to. Mahoney has worked at Chronicle Books since 1996 and was named president in December 2016. She talked to host Kai Ryssdal about that and more. What follows is an edited transcript of their conversation.

Kai Ryssdal: Tell me what Chronicle Books is, will you.

Tyrrell Mahoney: Chronicle Books is a publisher based here in San Francisco. We’re one of the largest publishers of illustrated nonfiction. We work across all sorts of lifestyle categories whether it’s cookbooks, wellness, pop culture. And we also have a large children’s division where we do picture books, board books and some YA [Young Adult], middle-grade books.

Ryssdal: So it’s an interesting thing that you do because it’s not just books, right? It’s all kinds of other sort of addenda that feel good and tangible in the hand, right? And you have to get people into retail stores and it’s all of that.

Mahoney: Retail is critical for us because it is the experience. Our books really have to be discovered. They can be found in a store they’re merchandised with all sorts of other products sometimes or in a bookstore on a shelf or even on a table alongside other types of gifts, stationery, and bestselling novels. We really are very distinct.

Ryssdal: Is Jeff Bezos at Amazon your worst nightmare or what?

Mahoney: It’s complicated. I think Amazon has been a great a great customer of ours and they have offered incredible convenience to people who want to buy books. What we often worry about is — what about our retailers? There is some serendipity that happens at a store and really it’s a Chronicle book that often benefits from that kind of discovery.

Ryssdal: Was there an aha moment when you realized you couldn’t just be at Barnes & Noble or Borders, you had to be in food supply stores and all that?

Mahoney: There was, it wasn’t in my time but the story goes that the president of the company for the last 40 years, he was also the sales rep back in the late 80s and he went to Barnes & Noble to present our full fall front list, which is our new titles. And he came back with no orders for any books and that was the moment where he and others thought, we’ve got to figure out a different way of bringing books into the market. We can’t – I think he said, “we can’t build our house all around Barnes & Noble.”

Ryssdal: Who, I wonder though, is your competition? Is it the Penguins and the Random Houses or is it somebody else that I’m not even thinking of?

Mahoney: Well that’s a lot more of the bigger publishers have kind of figured out what we do and what we do well and are trying to emulate that and more specifically if you were to look at Random House or any other big publisher, 15 years ago they really didn’t care about where else they could sell books outside of the big bookstores, whether it was Borders, Amazon, Barnes & Noble. And here we were, a publisher that was creating visual books that we knew had an opportunity to be discovered as a gift in anything from a small gift shop on downtown Main Street to a pet store to a to a gourmet store. That is now something those bigger publishers are figuring out and trying to be to be a part of.

Ryssdal: You’ve been running the place for a year plus or minus, right?

Mahoney: Minus. Seven Months in. Not counting.

Ryssdal: All right, well this is perhaps a front-loaded question then, but with an identity as clearly established as Chronicle Books has established, where do you take this company next? What’s your big thing going to be?

Mahoney: So when I look out to the future, of course, I’m thinking about how do we how do we stay on trend? You know the publishing business is not a fast-moving business. We’re acquiring a book today and it’ll probably be out there 18 months, 24 months from now. So that is a challenge and for me it’s thinking about how do we move more quickly, I think is what I’m mostly concerned about. A couple of years ago we saw a meme that was starting to take hold and gain popularity and it was Grumpy Cat. I don’t know if you’ve heard of this little guy —

Mahoney: We saw this, we thought it was hilarious. We were lucky enough to get a book deal pretty quickly and we probably got out in the market in 12 months and we had a huge success. We sold half a million copies of that little gal’s funny comments and pictures. But how often we can do that is I think less and less, really finding something that will still be of interest 12, 18 months from now.