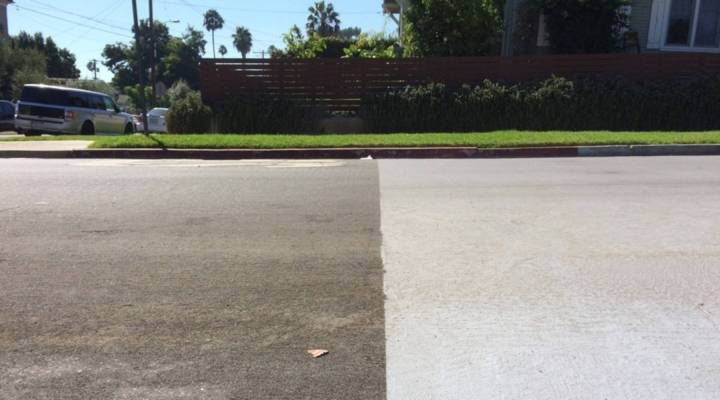 COPY
A stretch of Coronado St. in Los Angeles is one of 15 blocks that is piloting a cool pavement. Jed Kim/Marketplace

A stretch of Coronado St. in Los Angeles is one of 15 blocks that is piloting a cool pavement. Jed Kim/Marketplace
Listen Now

It’s not news that cities get hot in the summer, but the impact of that heat is expected to increase with climate change. Los Angeles is testing a new concept: reflective pavement to keep things cooler.

In the Silverlake neighborhood, Coronado Street between Mayberry Street and Berkeley Avenue looks like a pretty typical block in Los Angeles. But its palm trees, green lawns and homes line a pilot project that tops the typical blacktop with a thin layer of gray material.

“The color of the street is closer to the color of a concrete sidewalk here than the color of a normal asphalt street,” said Greg Spotts, assistant director and chief sustainability officer for the city’s Bureau of Street Services.

His department is essentially painting a reflective coating on about 15 individual city blocks. Those streets will reflect more heat than they absorb, cooling down the surrounding area. That mitigates what’s called the heat island effect, and that’s “going to become a very important part of adapting to a hotter, drier world,” Spotts said.

To demonstrate, Spotts pulled out a pistol-shaped infrared thermometer and aimed it at a patch of untreated black asphalt. The reading came back at 140 degrees Fahrenheit.

The temperature of untreated asphalt measured at 15 degrees hotter than treated.

A dozen feet over, on a portion of covered street, the difference was nearly 15 degrees cooler.

Spotts said the difference in readings was about what he expected to see, given past comparisons.

The coat of gray sealant is relatively cheap and easy to spread on, but it’s still far from getting the overall green light for city-wide deployment.

Greg Spotts, assistant director of the Los Angeles Bureau of Street Services, measures the surface temperature of a cool pavement.

Ronnen Levinson, a researcher with the Heat Island Group at Lawrence Berkeley National Laboratory, said any energy savings have to be weighed against the energy used to make millions of gallons of the sealant.

It’s not clear how effective the covering will be as it gets dirty, or wears off as cars drive on it. Levinson said the technology isn’t ready for a full rollout, but he’s all for field tests.

For the people who live in the testing areas, the lighter streets can seem pretty cool, literally. Kris Chau is an artist who’s lived at this intersection for five years. She was standing barefoot on the pavement — a rare luxury in August.

“It just feels like standing on the sidewalk,” she said. “It’s not like black tar, so it’s not burning my feet off.”